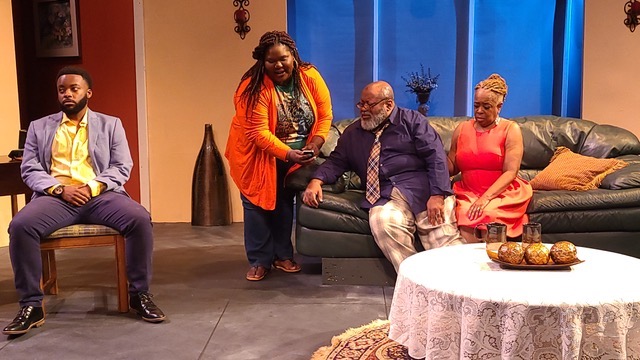 Bunbury Theatre Co.'s "Look What The Fire Did" is about a teacher who finds out that his mentee, Black college student, has been shot by police while protesting.Photo by Hannah Greene

By now it’s a conditioned response for most of us. A news alert pops up on our phone or a TV screen, or we hear it on the radio or see it in a paper, if we still get one: another person has been killed by police somewhere in the US.

Among the economically prosperous democracies, the rate of police killings is unique. It happens here about a thousand times year, three times a day. No other advanced country — not even the most diverse and socially fractious nations in the European Union — even comes close.

Here, because of its frequency, it’s not surprising that we have a conditioned response. We check for details: Crime in progress? Traffic stop? Mental health check? No-knock warrant? Knee on the neck?

And the race of the victim.

My guess is that there is a team of analysts at Twitter who can very precisely predict how these factors come together to shape how America responds to each of these stories.

And my guess is that in that first moment you can do the same for yourself. I think you know in your heart of hearts that in that first flash — at least until all the facts are fully known — which side you’ll take in the debate that is about to start.

Playwright Lewis J. Morrow’s brilliant “Look What the Fire Did,” which runs through this weekend in a Bunbury Theatre Co. production plunges into the aftermath of the police shooting of a Black college student.

Either way, I think you’re likely wrong. What we call “entertainment” is about taking sides, about battles about good and evil and clear winners and losers.

Great art is the opposite of that. It’s never about taking sides. It’s always about discovering paths that lead in unexpected directions.

By that standard, “Look What the Fire Did” is great art.

And this production, directed by Sidney Edwards (Director of the African American Theatre Program at UofL, is one of the finest pieces of drama I’ve ever seen on a Louisville stage.

I cannot account for the fact that this superb piece is so lightly staged, except for bad timing. As far as I can tell, it premiered at a Fringe event in Kansas City, Missouri in the summer of 2019. And we all know what happened the following spring. But for the pandemic, I think this play would already have vaulted into the consciousness of theater producers around the country. But it’s to the enduring credit of Bunbury Theatre, Juergen K. Tossmann, and Sidney Edwards that we have it here.

In summary, it’s a simple enough premise. The play opens on a convivial family gathering. Vaughn (Troy T. Bell) and his wife Tay (Jan Louden) are joined in their comfortably appointed living room by their two children, David (Xavier Mikal) and Vita (Takayla Williams Jackson), and by Vaughn’s longtime friend John, Sadik Ibn-Mohammed. It’s a splendidly witty, familiar scene, filled with joyous details: a discussion of Tay’s recipe for red beans; Vaughn’s concerns about whether John can be trusted to return Tay’s Tupperware if he takes home some leftovers; tales of old misadventures that have long since become fonts of wisdom and humor.

Morrow laces this fine opening scene with harmless, witty riffles of tension along lines of generation and gender. And from a performance standpoint, this opening scene is a model of clarity and grace.  Edwards and the cast do a superb job of building the characters and attitudes that will play out after David’s cell phone starts ringing and Facebook posts start coming in about an incident at the campus where he teaches. Across the entire cast this is individual and ensemble work of the highest order. Every character in this play feels authentic and true. There is obviously supreme acting craft on display, but it is so entirely bent to the purpose of the play that it’s difficult to separate the actor from the character.

In short order, we learn that one of David’ students and mentees, Jamar (the son of Vaughn’s friend John) has been on the front lines of a campus protest. And then comes the news that he has been killed.

From that moment on the play takes on the taut, riveting pace of all great dramas. Great dramas from the historical canon — “Antigone,” “An Enemy of the People,” “Inherit the Wind,” and the like — seem remote to us, though in their time they were of pressing urgency.  But we now live in urgent time, and our great theater writers are working from the same urgent impulse to investigate how humans address great emergencies.

“Look What the Fire Did” is not a play about a topic. It’s a play about humans — and about actions, choices, ideas, and emotions, and consequences.  Tensions as Jamar’s personal history (and misogyny) is revealed on social media. David grapples with his sense of responsibility as a mentor and how he ought to respond as a human confronted with an injustice.  Vita deals with the revelations about Jamar’s own ideas about gender and race. And in a superbly imagined and performed scene, we witness an extraordinary moment between the slain Jamar (Khristian I. Davis) and his bereaved father, John.

In the end, this is a drama full of questions that must be answered and choices that must be made — and Morrow and Edwards keep the tension simmering without ever tipping their hands about what will happen next — or who is “right” or who is “wrong.”

That’s a question you’ll have to resolve for yourself. On the night I attended (and every night, I understand), the cast and director assembled on stage with the audience (everyone seems to have stayed) for a talkback session that was as bracing and revealing as the play itself.

“Look What the Fire Did”
Through April 24
The Henry Clay
604 S. Third St.
bunburytheatre.org
Times and prices vary (tickets available online and at the door)