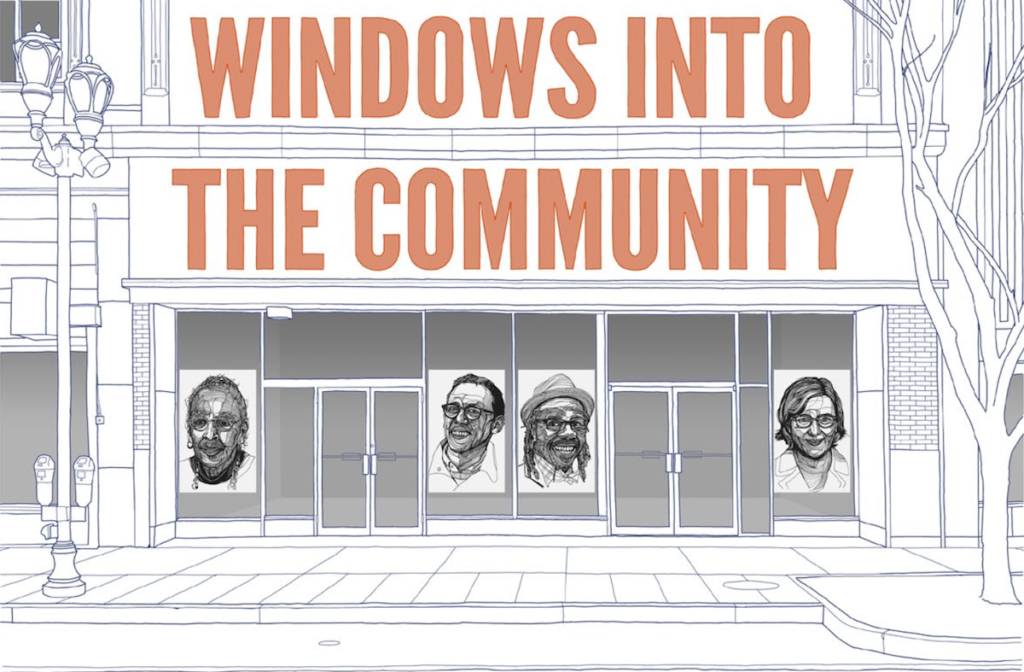 Tonight, join KMAC and artist Danny Seim for the opening of Seim’s, Windows Into the Community, drawing series. The reception is tonight March 16 from 6-8 p.m. at KMAC museum. The reception will give the public a chance to see the works and hear more about the project. This event is free and open to the public. There will be light refreshments but if you are not eating or drinking, masks are required. The pandemic rages on folks, so protect yourself and others.

The exhibition will remain on view until May 8 and the public can come anytime during business hours.

More about the project from the release:

The Windows Into The Community Project
Windows Into the Community is an ongoing project originally conceived by The Urban Design Studio at UofL. Through collaborations with their partners, including the Portland Museum, stakeholders and the community, the studio has been working on artistic interventions to spark interest in downtown while developing broader transformational goals. The impetus for the project is to celebrate and acknowledge the many hands it takes to build a community. This portrait series aims to highlight local people, both the famous and the obscure, who have made a positive impact on Louisville and Louisvillians while creating awareness of current efforts to move our city forward.

Seim’s original drawings, which will be featured in his exhibition at KMAC, have been enlarged and affixed to vacant or underutilized storefronts around downtown, in an effort to create a pop-up, city-wide street gallery, that provides some whimsey and renewed interest along our commercial corridors.

Danny Seim, who also serves as the Director of the Portland Museum’s AHOY! Project, uses his drawing style to “break down the hierarchy of popularity and status between the nominees” hoping to create a cohesive body of works that people across the city will want to view and learn about. The hand-drawn-ness of the project also encourages the audience to focus on the “many hands” concept of how cities function and grow.

The images are a mix of public personalities who are well known or unknown but who have done work to improve the city in a wide-range of fields both professionals and amateurs. These are people who have left a positive mark on the city.

The nominees for the project could be people who led large transformational change or those who led something as simple as a tree planting project to enhance their block of the city.

See the works tonight and through Derby and Mother’s Day Weekend. KMAC is located at 715 W. Main St. in downtown Louisville.