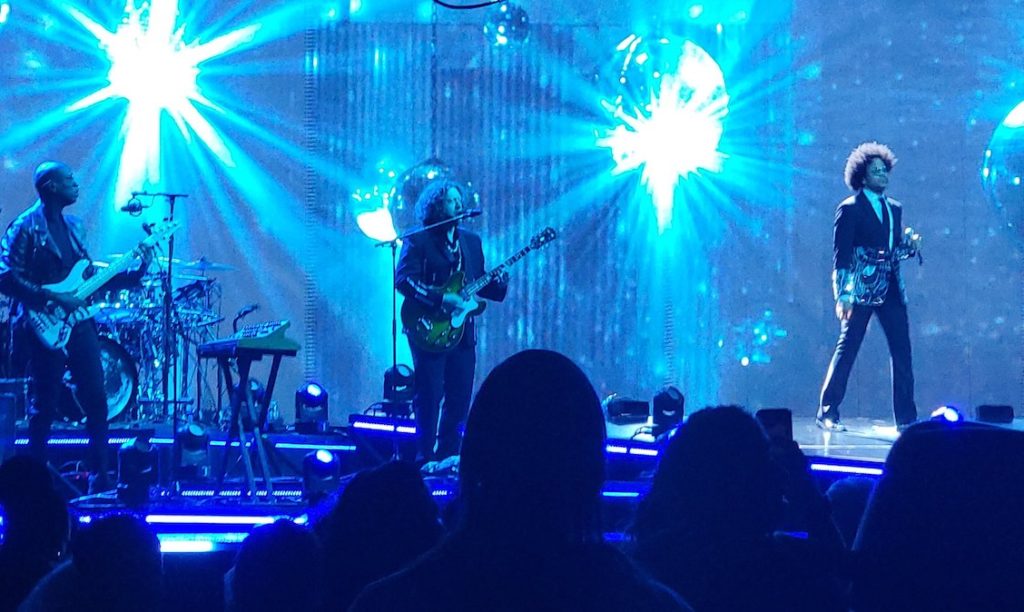 Maxwell's mirrored jacket was the perfect complement to his equally bedazzled audience.Photos by Erica Rucker

I don’t get to do reviews a lot. I get plenty of offers, but between a kid, life and COVID, it’s hard for me to be the reviewer. After talking with three-time Grammy winner Maxwell last week, I was excited about getting to see him for the third time in concert… and let me begin by saying this performance was top level, the best yet. So we’re starting from a very high bar.

There was a moment during Maxwell’s set when he commented about singer Joe’s set, and the crowd looked a bit confused. Did Joe play?

Sadly, crooner Joe went on early, and I completely missed his set as I ran into my cousins in the atrium of the Yum Center. Apparently, we were busy hugging and taking photos while he was singing. We didn’t even hear him, which we all found strange. It seems his set was missed by many and ran pretty short.

I was truly disappointed because he was high on my list for the evening. Because I really wanted to hear him sing, “All the Things,” amongst his other lengthy run of hit songs. I’m certainly not alone in that respect, and when I asked several people if they’d seen Joe, they had the same response, “We missed him, too.”

Despite missing Joe’s set, Anthony Hamilton delivered a blazing performance, tinged with gospel, even a little preaching. No, this wasn’t a Christian concert for sure but, as Black folks, we do what we do. One of his backup singers included a young woman from Kentucky.

Grammy-award winner, Hamilton, is best known for putting himself and his upbringing front and center of a rich, gritty, soul voice. His voice was honed in the church, hence the gospel edge to his show. His song, “Charlene” was a clear crowd favorite.

In Louisville, we are notorious for sitting calmly in our chairs even as we are greatly enjoying a show. This crowd, however, spent the majority of the night on their feet, dancing and singing.

Maxwell said in our interview that he wanted the night to be filled with joy, and this tour did not disappoint. Sitting in a room with so much Black joy was like getting a transfusion. We “hit different,” and when we come together for a concert, it is a celebration like no other.

Fashion is always the extra performer on a night like last night. When we dress up, it’s a bit extra. We saw velvet, vinyl, mink, gold jewelry and hair the color of flames. It was magnificent.

When Maxwell hit the stage, his mirrored jacket was the perfect complement to his equally bedazzled audience, and his energy sparkled along with his jacket.

For those uninitiated to Maxwell’s singing. His voice can go from a sexy growl to a lilting falsetto, even though he commented that this was the third show in a row, hinting that he felt his voice was maybe a bit tired. We couldn’t tell. His vocals were on point, and his new music melted perfectly with the old with the crowd feeling all of it.

For the crowd of mostly women, Maxwell paid homage to the lives and hearts of Black women, giving a special shout out to his mother, a Haitian immigrant who raised him in Brooklyn. Though not a woman, Maxwell also shouted out hometown hero, Muhammad Ali, who he said influenced him greatly as a young Black kid in New York.

There are moments in concerts when it is clear that a singer or band has hit a cosmic moment both with the audience and the music. Maxwell had several of those moments as he sang through his catalog. He would periodically stop as the audience finished his phrase, nicely and in the pocket. Singers do this a lot, and it feels planned. It didn’t feel this way at the show. Not only is Louisville a lovely town, we can sing too.

So moved by the Louisville audience, Maxwell commented that he was considering a move to the city. More to come on that, maybe? He would certainly be surrounded by a supportive community that would welcome him and his artistry warmly into the fold of the local creative community. New best friend, Maxwell… We really hope you meant that.

Favorites of his March 27 set were his renditions of his own hits, “Sumthin’, Sumthin’,” “Lake by The Ocean,” “Dancewitme,” and new hit, “Off.” On top of these, his rendition of Heatwave’s “Always and Forever” brought the crowd to a roar.

This man gave everything last night, and the show did not leave us wanting for anything…OK except maybe his version of the Kate Bush classic, “This Woman’s Work,” which seemed a strange omission considering the nod to Women’s History Month. Either way, Maxwell was sweating at the end of the show, and so were we.

If you’re hungry to see this tour again and maybe actually catch Joe’s set, they will be playing on April 7 at the Gainbridge Fieldhouse in Indianapolis.