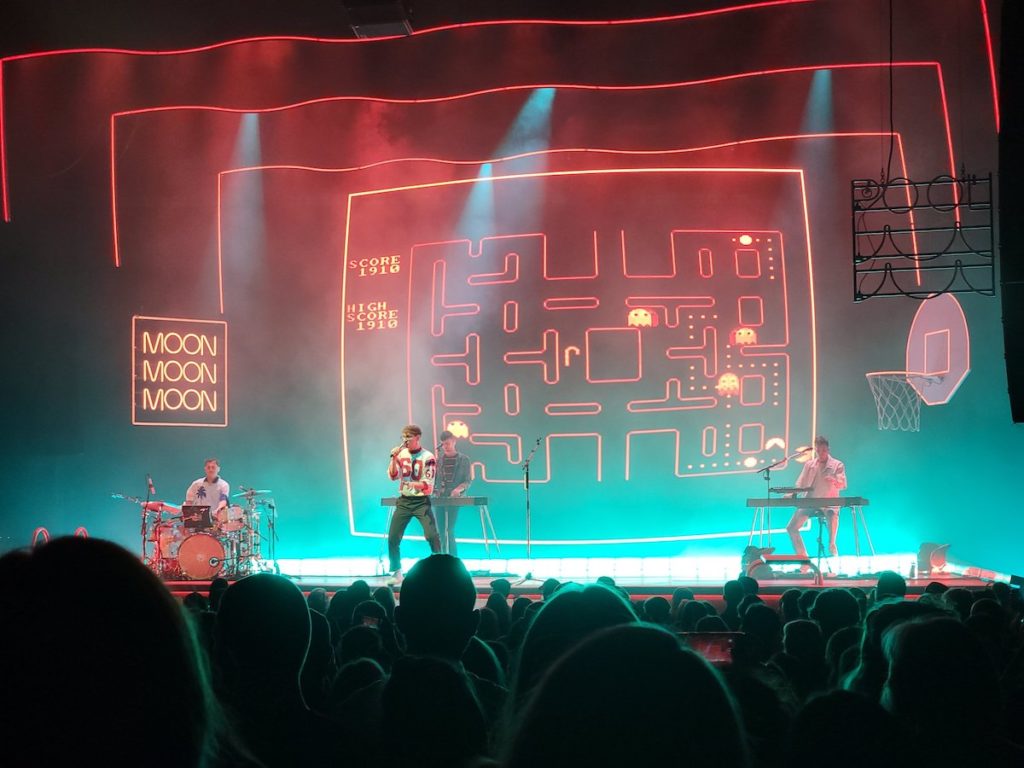 Glass Animals turned the Palace into a vacation party.Photos by Erica Rucker

First things first, oops that was an unintentional Imagine Dragons lyric from the opening of their hit, “Believer” that I only know because my son sings it incessantly. He also sings “Heat Waves” by Glass Animals a lot. When I got the opportunity to review the show, I knew that it was also a great chance to take the kid to a proper concert of a band he really likes, and now that it’s over, Glass Animals and Sad Night Dynamite have two new fans. It was also nice to have a young helper working the show with me.

Sad Night Dynamite, an English duo cozily situated in their connection to the acid-laced, trip hop genre, kicked off their set with their song “Smoke Hole,” a trip-hop infused tune that, live, brought more of a raw hip-hop feel with the vocals up front and the music almost secondary. The difference between the studio and live was stark to me for the Sad Night Dynamite set. I really love the recorded versions of their songs, and some of that didn’t translate to the stage. That isn’t a dig, mind you, this was more of an issue with the live mix and not the band. Their lyrics and delivery were spot on and fun. The Louisville Palace has notorious sound “pits” that muddy the mix and make the listening experience something to be desired, a tough task for a grand old theater.

The band, however, delivered song after song with high-energy and skilled musicianship as they added acoustic guitars, bass, drums and keys to their show. If they return to town, let’s hope they are outside where their sound can really travel or in a venue that is prepared for their unique mix needs, and let’s hope the crowd is ready to receive them with as much energy as they gave the crowd.

Fellow Brits, Glass Animals took the stage in support of their Dreamland album with “Life Itself,” and from the beginning of their set to the end, nary a behind touched the seats.

For an expert assessment of Glass Animals, I asked my son his opinion of one of his new favorite bands. As a newly minted 9-year-old concertgoer, he had some thoughts about the show.

“It was good, a bit loud,” he said. “Too many people screaming.” When asked what he thinks it means when many people are screaming he answers quickly.

“They like it,” he said. “They liked the music and visual arts of the show.”

“The same things they did.”

He’s correct, and the show was loud because the fans of Glass Animals are a lively and dedicated bunch. We were surrounded by beautiful and friendly characters, one in a kimono with a fan took great care to make sure all around were feeling comfortable including us. Much appreciated, by the way, because it was quite hot in the theater. Others shared glow sticks with the kid and helped make his experience one that he won’t likely forget.

Glass Animals, as a band, command their crowd perfectly through a set of danceable alt-pop rock hits. Singer, and fellow bespectacled adult, Dave Bayley, surprised me with his ability to get the audience to come along wherever he decided to go. The audience danced when he asked, they shouted when he didn’t. Whatever Bayley wanted from the crowd, they were willing to give.

Their stage felt like a vacation party with a diving board, video game backdrops and the band’s mascot, the pineapple, rounding out a much needed party vibe.
Some set favorites for me were “Space Ghost,” “Waterfalls Coming Out Your Mouth,” “Gooey,” and of course their recent hit, “Heat Waves.”

Glass Animals provided their audience an amazing night and gave me the chance to show my son what it’s like to dance and let go at a real concert. He was bashful at first, not sure what to do with his arms. It took a few tentative waves for him to understand that he could flail them about to the beat of the music and that it was encouraged and fun. Watching him scan the crowd and finally let go into the music was joyous. As a longtime music lover and concertgoer, having your children find a similar joy in music is surprisingly uplifting and endearing.

For us, it was a banner experience. I wasn’t familiar with either band other than the experience of my son’s singing and TikTok’s use of “Heat Waves” in many memes. These bands, whether you know them or not, will have you on your feet, dancing and forgetting that two hours before, you’d only heard a few songs in passing.