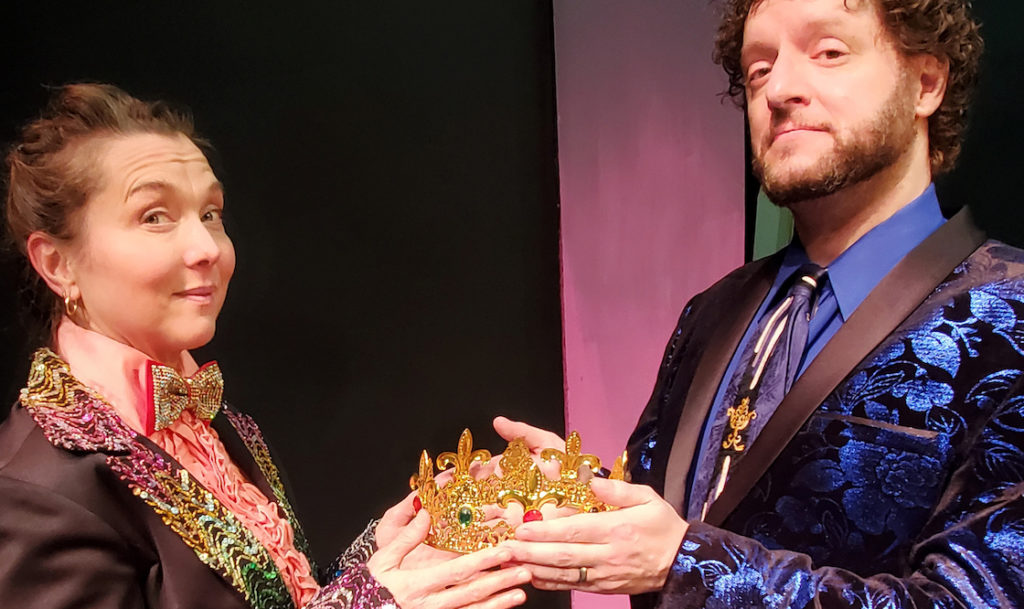 On stage, members of Pandora Productions’ large cast for the musical “Head Over Heels” warm up. Some physically stretch while others run harmonies from snippets of songs by The Go-Go’s with musical director John Austin Clark, as he stands at a keyboard behind a long model of a Manhattan skyscape.

At one point, costume designer Donna Lawrence-Downs comes from backstage to show director Michael Drury her work for one character. At her side stands an actor dressed in a red T-shirt declaring “Totally Tubular” with a Zebra-patterned jacket — a 1980’s concoction.

Not all musicals are the same, says Drury, as he talks about directing many of them over his 22 years as Pandora Productions’ producing artistic director. That also goes for the subgenre of jukebox musicals — and especially “Head Over Heels.”

The musical, which opened on Broadway in 2018, makes its Louisville premiere at Pandora Productions when it opens on Friday, March 4.  Jeff Whitty (“Avenue Q”) wrote the musical’s book, which was adapted by James Magruder, who works frequently in adapting and translating classic literature.

Featuring music by the ‘80s all-women group The Go-Go’s, the stage requires different scenes, and the dialogue is Elizabethan English — yes, the language of Shakespeare. It also is written in the rhythm of iambic pentameter, which the Bard often used. What, pray tell?

As Drury explains, The Go-Go’s infectious music infuses the story, which is based on a 16th century romance “The Countess of Pembroke’s Arcadia” by English poet and scholar Sir Philip Sidney. There is a king of Arcadia who, with his wife, have two daughters. But life is upended when a new oracle, who is non-binary, comes to town and declares four prophesies regarding his daughters and him and his wife. The prophesies involve the union of the daughters and others with unexpected lovers and set the characters on a journey. The characters and their relationships represent a range of expressions in their sexual identities, which include fluid identities.

“All of these people are on a journey to try to prevent these prophecies from happening and along the way, of course, all of the prophecies happen because they take the journey,” Drury says. “It’s really a story of love and acceptance.”

On Broadway, the sets and costumes were elaborate and mirrored Elizabethan styles. So, creating the world of Arcadia and its characters’ adventures on the Henry Clay Theatre stage where the company performs was a challenge for Drury.

Drury decided to make some changes, which involved juggling Pandora Productions’ large cast, big dance numbers, and various several set pieces. Instead of having the characters in an Elizabethan Arcadia and traveling to Bohemia, Drury sets the story in the 1980s, which simplifies the costumes, and places the story in New York City and Central Park, which designer Robbie Steiner’s set pieces reflect.

“I don’t like to do what somebody else has done,” Drury said. “That’s not why I create art. I create art to make something different.”

Drury and Pandora Productions are no strangers to pivoting. The pandemic has required the company to experiment to reach audiences. Last season, the company broadcast virtual productions and ended with in-person performances. This season, it has held in-person performances, which require mask coverings for attendees, and adopted a policy requiring proof of vaccination or a negative test within 72 hours.

As COVID-19 cases and the positivity rate continue to decrease in Jefferson County, Drury hopes “Head Over Heels” marks an essential pivot for Pandora Productions and the greater arts community.

“I’m hoping that ‘Head Over Heels’ launches a new feeling and comfort about coming back to the theater,” he says. “That’s my hope, not just for us, but for everybody in the arts which I think have suffered.”