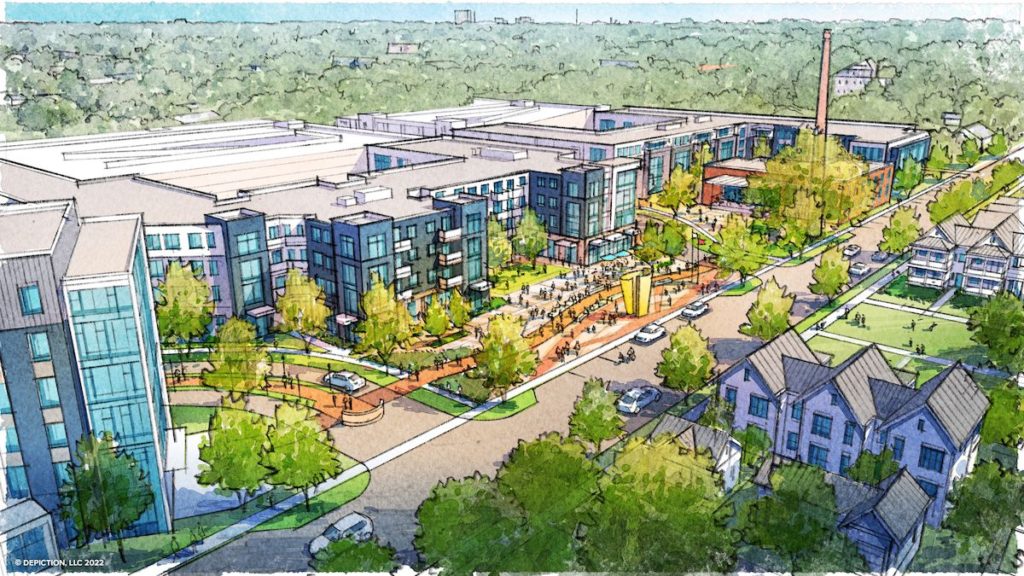 Paristown Preservation Trust revealed more detailed plans for the city’s former Urban Government Center property today, which include apartments, office space, a boutique hotel, condos, cottages and space for the public including a farmers market and a café.

“Having more people live and work in Paristown every day, it’s a big win for the restaurants not only in North Paristown, but in the neighborhoods,” said Steve Smith, the project’s developer who was also behind nearby developments including Old Forester’s Paristown Hall.

The new $183 million plan, which still needs city approval, contains more than what Paristown Preservation Trust originally proposed in its development application for the city. To satisfy city requirements on affordable housing, the company is partnering with Highland Community Ministries to build 70 affordable senior housing units and an 8,000 square-foot child care center across the street from 450 apartments on the main campus called Paristown Heights.

Paristown Preservation Trust plans to raze all the buildings on the Urban Government Center property, including the former Kentucky Baptist Hospital building, except for the steam plant, where it plans to open a post office, health center, public meeting space and café.

The plan calls for 20% of the development to be green space, with native plants and pollinator gardens and restoration of the tree canopy. The Germantown-Paristown Neighborhood Association had previously called for the city to transform the Urban Government Center property into an urban forest instead.

John Gonder, president of the Germantown-Paristown Neighborhood Association, says the development still doesn’t have a “thumbs up” from him, and he is hoping for more environmental concessions to be made in a community benefits agreement.

“You can’t watch the news or read the paper and not see some evidence almost every day of climate change, and plantin’ little things out by the walkway of an apartment complex is not really addressing that,” said Gonder.

The community benefits agreement is part of the city’s deal with Paristown Trust to sell the property to the company for $1.

Gonder said that Paristown Preservation Trust partnering with Highland Community Ministries does make the bitter pill of the development easier to swallow.

Here’s what else Paristown Preservation Trust plans to replace the Urban Government Center with:

Paristown Preservation Trust was not Metro Louisville’s first choice to redevelop the Urban Government Center. In 2019, a deal with Marian Group dissolved over permit disputes. Then, the city selected Underhill Associates, whose Paristown Green proposal involved repurposing the buildings on the site to create multigenerational housing, town homes, retail space, a restaurant, a child care and gym. Negotiations with the group fell apart after Underhill Associates asked for the city to help fund the project with American Rescue Plan money.

Smith told LEO that it would have been financially impossible for him to keep the current buildings on site.

“That is why the other two projects didn’t succeed is their math problem was not realistic,” he said. “And so our plan, you know the math problem works.”

The development agreement between the city and Paristown Preservation Trust states that the company will be eligible to qualify as a Tax Increment Financing district in exchange for providing affordable housing and will be able to apply for state and federal funds.

Paristown Preservation Trust plans to file its Zoning Pre-Application Plan with Louisville Metro Planning and Design Services by the end of March.