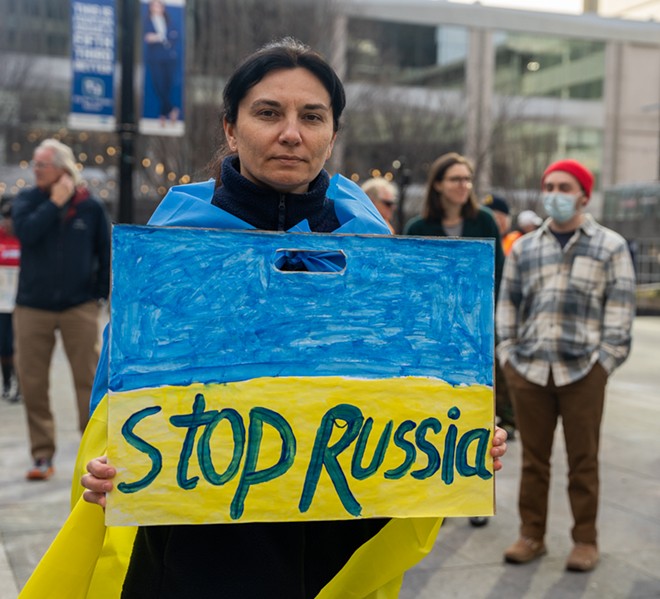 A marcher protests the invasion of Ukraine in Cincinnati on Feb. 28Photo by Casey Roberts for CityBeat

As the war ignited by the Russia invasion of Ukraine rages on, a local protest aims to bring awareness and raise funds for the ongoing humanitarian crisis that has followed the conflict.

This Sunday, March 20, from 1-4 p.m. at Waterfront Park’s Great Lawn, Slava Ukraini International will host a rally in support of Ukraine that aims to send money to those affected and displaced.

The rally will feature a march, followed by speakers who have been directly impacted by the war. There will also be items available for purchase, with proceeds sent directly to humanitarian aide. The group also currently has a silent auction for several items featured on its Facebook page.

NPR reported that, according to UNHCR — the U.N. refugee agency — almost 3 million people have fled Ukraine so far.

Russia is facing a flurry of accusations of war crimes as the civilian casualties grow. This week, Russia was accused of bombing a theater in the coastal Ukrainian city of Mariupol where civilians were said to be sheltering. According to satellite images seen by CNN, the word “children” was spelled out on two sides of the building.