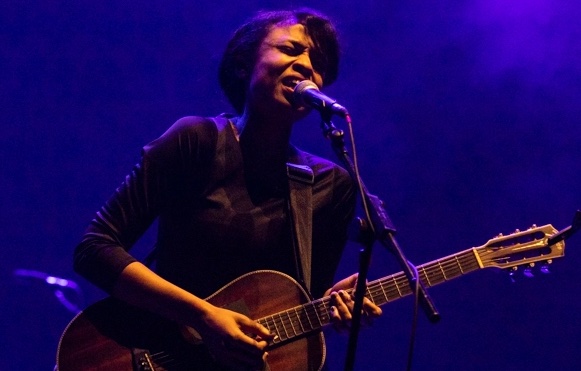 Adia Victoria on her recent stop in Louisville while she toured with Jason Isbell and the 400 Unit.Photo by Carolyn Brown

Adia Victoria’s current album, A Southern Gothic firmly cements her status as the mistress of “Gothic blues,” a musical style that centers itself in lyrical themes of loss, poverty, the South, ghosts, betrayal and more. Creating her album during the pandemic, Victoria was forced to improvise when she had to abandon her usual methods of in-studio collaboration, but it enabled her to take the time to experiment with layering sounds and rhythms which definitely enhances the album’s subject matter. On the heels of her recently released single, “Ain’t Killed Me Yet,” Victoria is coming back to perform in Louisville on Thursday, April 7, this time in the intimate setting of Zanzabar, a much different venue than the Louisville Palace where she last performed as the opener for Jason Isbell.

LEO caught up with her again to discuss the album and her songwriting practice. While you’re reading, turn on A Southern Gothic and thank us later.

LEO: Reviews have called A Southern Gothic more stripped down than your other albums, but to me the songs are so atmospheric and they are so full, there’s so much depth to them. Do you agree that it’s more stripped down or do you feel like as you recorded the album, you were able to put more into it?

Adia Victoria: When they talk about the songs being stripped down, I think what they’re hitting on is the process behind writing A Southern Gothic. That began when I was in Paris — much of it was written when I was away from my band. I was staying with some friends for a month right before the pandemic, and I was making a lot of the rhythm tracks with one of my great creative partners, Marcello Giuliani, over there. I was using things like beans and rice and cans and tins, just trying to find very found, rooted earth sounds and then going and layering the guitar, the blues riff on top of that. Later on in the process of mixing, T Bone Burnett showed me how to atmospherically mix a song so it has layers of depth and light — how certain sounds and mixing can make songs sound darker and then you can find the light in that song as well. That was very instrumental to filling out the atmospheric space on the record because it is so rooted inherently in my body and in the rhythms and the earth and percussion, percussive elements that aren’t necessarily too complex.

Do you feel like growing up in the church influenced your writing and your music in a way that is worth noting or do you notice that that has had an impact in how you write music?

Yeah, I would say growing up in the Seventh-day Adventist Church religiously I was “other” in a way where we were not the predominant religion in the South. There was more of a removal away from what we call secular society. So I already grew up with this separation, this disjointedness with the culture around me at large. I think that dislocation, that my religious upbringing allowed me to observe the world from even further away, to step back even further, to get a greater perspective on the way that the South works, the way that Southerners work, the way that white supremacy works, the way that my culture orders itself. So I would say that has definitely found a home in my art. And that’s not to even go into the prescriptions of the Church of good and evil, heaven and hell, all those other binaries that are put on the shoulders of poor Christian children.

I read an article about you making the distinction between being a poet as well as being a musician, and that was interesting to me because a lot of times they’re held together. Is there a reason why you make sure you identify separately as both a poet and as a musician?

Poetry is a way of speaking, thinking and ordering the world. Much in the way that a composer uses music and instruments a poet uses words to feel the world, hear the world. The first thing that I did as an artist as a little girl was I was writing little poems to myself, little rhymes and limericks and that was how I ordered the universe initially. I found that I have to be able to embody the lyrics of my songs before I can put music to them that there has to be this rhythm, there has to be this way that the words are seen alongside of the music, and I don’t know if that made my job easier or harder, but I do believe that my songs are poems, are stories first and foremost and the music accompanies the story, it serves the story.

It depends. I mean, I’ve done it every which way — I’ve found a million ways to skin this cat. I think it just depends on what rhythm speaks to me. Is it a guitar riff that’s been able to get my motor going, or is it me going on a walk around Paris and finding that rhythm, finding words and inviting myself to match a feeling? I try to allow myself to be open to the process and to arrive right when it when it needs me.

Adia Victoria is set to perform at Zanzabar on Thursday, April 7. The show starts at 8 p.m., and tickets are $18.