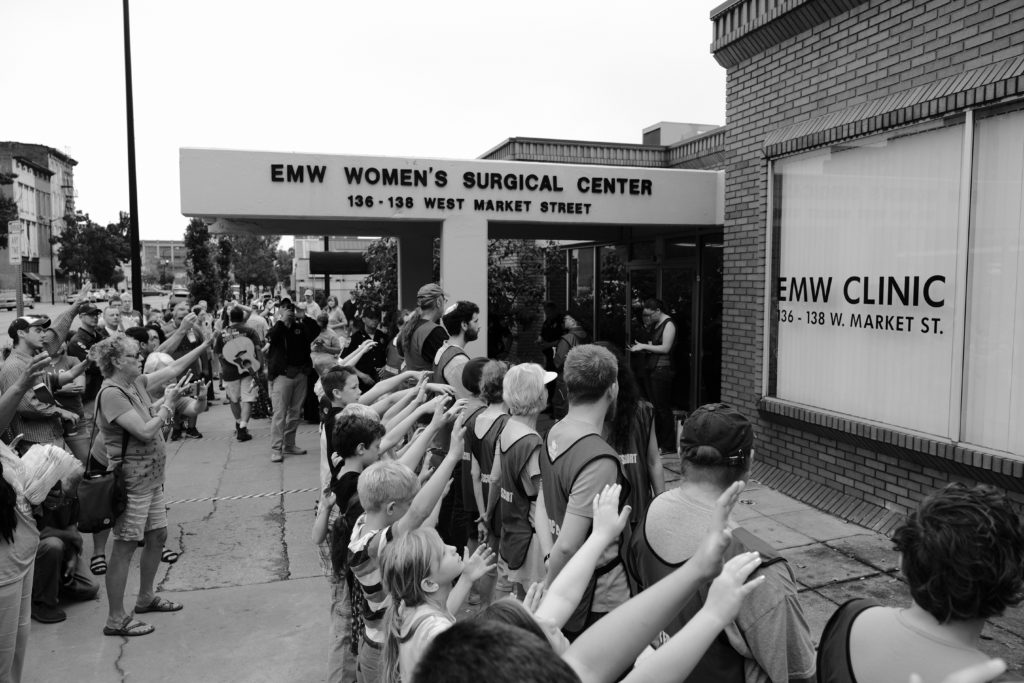 With the clock ticking until the governor’s veto period, on Tuesday the Republican-led Kentucky General Assembly passed sweeping legislation that would limit and restrict access to abortion in the state.

House Bill 3, a layered, omnibus bill sponsored by Rep. Nancy Tate (R-Brandenburg) would amend state law to make it harder for minors to get abortions in cases when a parent is not able or qualified to provide written consent, as well as restrict access to abortion medication. It would also ban abortions after 15 weeks of pregnancy, overriding the current law, which bans abortions after 20 weeks of pregnancy — similar to a controversial and legally-contested Mississippi law.

Since the bill cleared both chambers, it now goes to Gov. Andy Beshear, who has voiced support for abortion rights. Although if Beshear vetoes the bill, the Republican supermajority could easily override it.

During debate, with several protesters present, Sen. Karen Berg (D-Louisville ) — who is a diagnostic radiologist — a doctor who often does the first trimester of ultrasounds — said that the abortion medication aspect of the bill was based in personal belief systems and not medicine.

“Why are we doing this, guys? And I know the answer,” Berg said on Tuesday. “So, you have to ask, what is the purpose behind this legislation? Why are we so over-regulating, such a safe and and wanted medical procedure? The answer is very clear. There are certain legislators who feel that they a right to regulate their personal religious and their personal moral beliefs over the rest of us, under the guise of safety for women. I will tell you again that this procedure is exponentially safer than child birth. It is a medically-accepted procedure.”

Shortly after, Sen. Adrienne Southworth, a Republican from Lawrenceburg, framed the bill as positive under her own personal and moral beliefs.

“The reason we have to pass laws like this is to be sure that babies have their say as well, since the babies have such unheard voices,” Southworth said.

Several Democratic senators walked off of the floor instead of voting.

Minors in Kentucky are already required to obtain parental consent to undergo an abortion procedure. But, they can get an exception if they go through a process called “judicial bypass.” House Bill 3 would make that process more difficult by adding heavier standards to the qualifications that must be considered by the court, such as “stability,” “credibility and demeanor as a witness” and “ability to accept responsibility.”

The bill would also make it more difficult to obtain abortion medication. Under the measure, a physician registered with the Cabinet for Health and Family Services would have to examine the patient in-person prior to providing abortion medication. The physician would also be required to use a form on a public portal created by the Cabinet for Health and Family Services to obtain the consent required prior to providing an abortion-inducing drug.

On Tuesday, lawmakers added and approved a floor amendment that would ban access to abortion after 15 weeks, absorbing language from Senate Bill 321, sponsored by Sen. Max Wise (R-Campbellsville), which caught national attention after a passionate explanation from Sen. Berg (D-Louisville) on her no vote.

The ban after 15 weeks is modeled after a similar Mississippi law that’s currently being weighed by the Supreme Court. Several states, such as Florida and Arizona, have mirrored the legislation that challenges Roe v Wade, as lawmakers on the state level wait for possible changes to national abortion rights.

Lawmakers also voted down an amendment on the Senate Floor on Tuesday that would have exempted patients in cases of rape or incest from the new criteria.

Before that vote Sen. Denise Harper Angel (D-Louisville), who proposed the amendment, said, “Without [the amendment], this body turns its back on the victims of heinous crimes, and leaves them with no choice than to raise a child that resulted from violence, or to put that child up for adoption.”