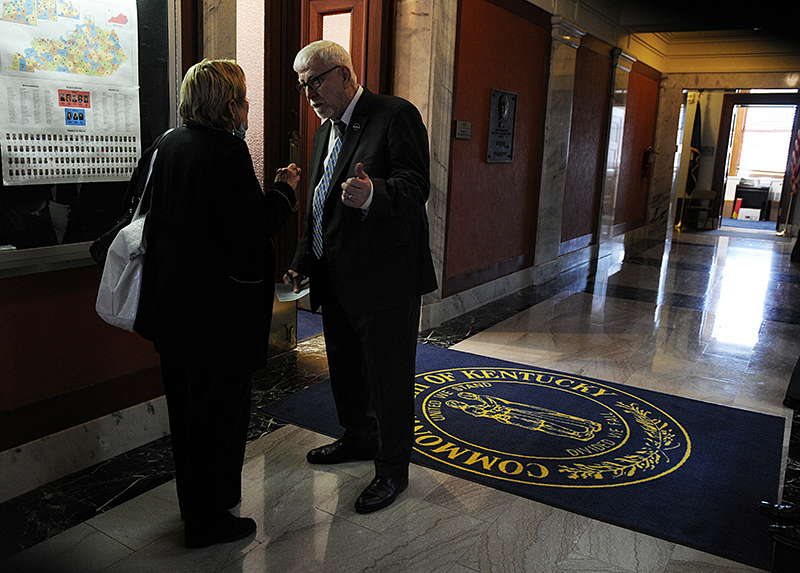 Rep. Danny Bentley (right) speaks with Rep. Mary Lou Marzian on Feb. 23. In response to a floor amendment from Marzian on March 2, Bentley went on a rant about Jewish women.Photo courtesy of LRC Public Information

At a press conference about “civility and respect” in public education, a Kentucky state senator found himself answering a question about decorum in the state legislature, specifically about antisemitic comments that have been made by his colleagues recently.

Sen. Danny Carroll said that there is no issue with antisemitism within the Kentucky state Senate.

“I think those claims are ridiculous,” he said.

The past couple weeks demonstrate otherwise.

Yesterday, state Rep. Danny Bentley went on a rant before a vote on a bill that would limit the use of medication-induced abortion, discussing the sexual habits of Jewish women and making false claims about the drug’s origins that involved the Holocaust.

All lawmakers have apologized for what they said. All comments have elicited responses from Kentucky Jewish groups that have called them antisemitic.

Rep. Walker Thomas was the legislator who first used the “jew them down” phrase during the hearing last week. Sen. Rick Girdler repeated it but corrected himself.

Rep. Bentley’s rant about Jewish women occurred after Rep. Mary Lou Marzian proposed a floor amendment to exempt Jewish people from the bill’s abortion provisions, arguing that the Jewish faith does not teach that life beings at conception.

Bentley said, “Do you know that a Jewish woman has less cancer of the cervix than any other race in this country or this world? And why is that? Because the Jewish women only have one sex partner. That’s the reason. They don’t have multiple sex partners. To say that the Jewish people approve of this drug now is wrong.”

Bentley also falsely claimed that RU-486, also known as the abortion drug Mifepristone, was invented during World War II and was originally called Zyklon B, which Nazis used to kill Jewish people during the Holocaust.

He added that the drug was made by a Jewish person, which is true — although it was invented in 1980.

About the company that makes RU-486, he said, “Why would they do it? Because they’re making money on it.”

“Words matter, and leadership matters,” they said. “We call on all elected officials and community partners to forcefully denounce antisemitism and all forms of bigotry, especially when they emanate from officials elected to serve the people of the Commonwealth.”

Bentley did apologize for his comments, providing a statement to the Courier Journal saying, “I meant absolutely no harm in my comments today and sincerely apologize for any they caused. Last week we received a heartbreakingly sad reminder that anti-Semitism still exists in our society and I apologize if my comments today caused similar pain or any doubt that I stand with the Jewish Community against hatred. My intention was to speak as a pharmacist to the history of RU-486 and respond to a proposed amendment. I clearly should have been more sensitive with my comments.”

Girdler and Thomas apologized for their comments last week.

Thomas told the Herald Leader, “I sincerely regret using that term and apologize to anyone harmed by my use of it. This is not who I am, nor is it what my faith leads me to be. It is a phrase I have heard throughout my life, but this experience has provided me with an opportunity to reflect on the impact that words have and the fact that we must be smarter today than we were yesterday.”

“I have no hate or malice in my heart for anyone in the Jewish community,” he said.