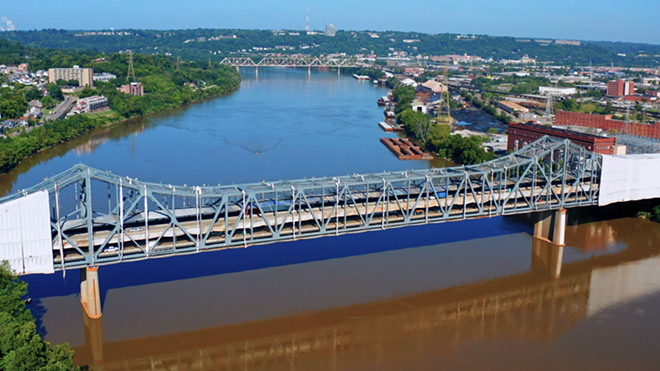 The Brent Spence Bridge connecting Cincinnati and Covington may finally get its glow-up, thanks to heavy alignment from Ohio and Kentucky leaders.

Kentucky Gov. Andy Beshear, Ohio Gov. Mike DeWine and officials from both states gathered Monday to watch as the governors signed a memorandum of understanding outlining plans to jointly apply for and use federal dollars to revamp Greater Cincinnati’s longtime traffic nuisance.

“We think it (applying jointly) puts us in the best position to move very quickly after securing the dollars. It’s critical to helping us win,” Beshear said.

Plans from the Ohio and Kentucky transportation teams call for the Brent Spence Bridge to be repaired while a toll-free companion bridge is erected nearby to help alleviate traffic. Beshear said during the Feb. 28 briefing that he and DeWine would jointly request a total of about $2 billion for the project.

Opened in 1963, the Brent Spence Bridge carries traffic north and south on I-71 and I-75 across the Ohio River. For decades, the bridge has been a source of daily traffic jams, extended safety and maintenance projects, and efficiency failures for one of the nation’s major freight corridors. A website for the Brent Spence Bridge’s 2017 maintenance project states that the structure was originally built to carry 80,000-100,000 vehicles per day, but traffic in recent years has doubled to 160,000-180,000 vehicles each day.

“There is no bridge in this country that is as necessary and needing of a change,” DeWine said.

On Monday, Beshear and DeWine signed their intent to apply for grants that will become available through the $1 trillion infrastructure bill that Congress approved and U.S. President Joe Biden signed in November. About $110 billion will be available to repair aging bridges and roads throughout the country, the largest such federal investment in about a decade, the New York Times reported.

States must apply for the funding, competing against other states for the limited federal pot, officials said. The federal government has not yet begun the application period, but the Ohio and Kentucky teams have worked together to align on individual and joint bridge plans plus outline funding responsibilities so that they can quickly apply when the time comes.

Kentucky Transportation Secretary Jim Gray said that the Brent Spence Bridge and its companion bridge form a design-build project in which design, engineering and construction officials from both states align on plans from the outset and throughout the project. This, he said, will improve the project’s quality, timeline and costs.

Gray said that because of the Brent Spence Bridge’s longstanding problems, its position as a major freight thoroughfare and the collaboration between Ohio and Kentucky leaders, the bridge project is likely to receive federal funding. Beshear insisted that he believes funding is imminent, adding that Kentucky and Ohio leaders jointly have talked many times with the U.S. Department of Transportation.

“The I-75/I-71 corridor is among the most important stretches of freight traffic anywhere east of the Mississippi River. And unlike anytime before… the recently passed Infrastructure Investment and Jobs Act tells us that we don’t just have ‘a chance’ — I’m pretty sure we’re going to get this done,” Beshear said.

There’s at least $39 billion in federal funds available specifically for bridge projects, DeWine said, noting that the Feb. 28 memorandum of understanding is the latest of several such joint documents between Ohio and Kentucky about the bridge.

Each state would apply separately but in tandem, ultimately combining what likely would be “two pots” of money. If approved, Ohio and Kentucky would contribute the remainder of the funding after the federal dollars are allocated. Beshear said that as long as there’s significant federal help, both states have multiple ways in which their budgets could source any remaining money necessary for the project.

DeWine noted that as of today, total Brent Street Bridge project costs are expected to be about $2.8 billion, with that number to grow the longer the work is put off.

Gray said he expects that applications will open in the next couple of months with federal decisions likely by early fall. Ohio Department of Transportation Director Jack Marchbanks added that if the bridge project receives a federal grant by the end of the year, a design procurement package could be “on the street” by fall 2023, and repairs to the Brent Spence Bridge and the construction of its companion bridge could be completed within five years in a conservative estimate.

“I want us to be able to break ground next year,” Beshear interjected with conviction. “We will take their timetable, we will divide it by two, and we will push from there.”

The Brent Spence Bridge, which carries the freight equivalent of 3% of the nation’s gross domestic product according to the National Association of Manufacturers, is in dire need of improvements and repair after seven decades in existence. In February, the American Transportation Research Institute named the I-71 and I-75 confluence at the Brent Spence Bridge the second-worst truck bottleneck in the entire country— the same ranking as in 2021 and three spots higher than in 2020.

For about eight months beginning last March, the Brent Spence Bridge closed half its lanes for maintenance. The bridge finally reopened to regular traffic on Nov. 8.

Watch the Feb. 28 announcement below.