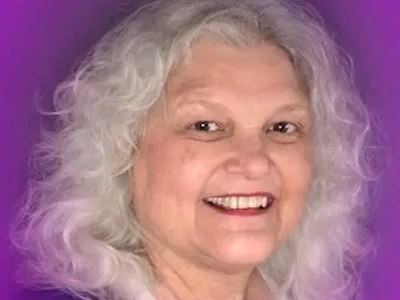 Yvonne Miles was a character. You can tell from the obituary she wrote herself.

Miles filled her obituary, which was posted to the Courier Journal’s website on March 10, with jokes and anecdotes.

“In order to finally have the smokin’ hot body I’ve always wanted; I chose to be cremated and my ashes spread at an undisclosed site,” she wrote. “I still want to stay on this side of the grass! The idea of being buried just kills me (pun definitely intended).”

Miles was a retired paralegal who worked as the Dubois Circuit Court Reporter in Jasper, Indiana, according to her obit. While she preferred murder cases, her favorite civil case, she said, was the “Chicken Blowout” trial.

She might have gotten her sense of humor from her mother, Violet Buescher, who preceded her in death and who Miles called “acerbic” in her obit.

She is survived by her husband, Brian J. Miles, her son Michael F. Sutton, his wife Laura (Scheuer) and her beloved grandson, Dashel — as well as her 20-pound cat Coltrane and two siblings “neither of whom deserve mention here,” she wrote.

Miles’ ashes will be scattered with those of her first cat, Tori Sue Torkelson.

To no surprise, Miles planned a party to celebrate her “awesome trip through life,” which she wrote will include all her favorite songs on a Funeral Playlist. Each guest will get two drink tickets.

If you won’t get to be there to toast her, Miles requests that memorial gifts be “made out to the Kentucky Humane Society, NOT the United States Humane Society.”

Miles signed her obit off with, “Peace, Love, and Happiness to Everyone!”