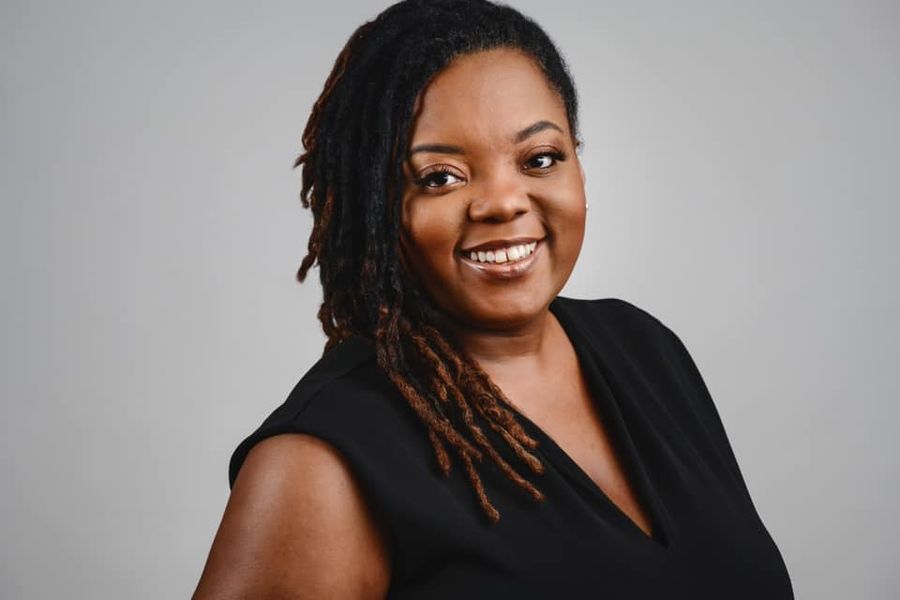 Erica Denise is a dynamo of activity. She is a singer, actor, motivational speaker, former coordinator of fine Arts at Louisville Central Community Center (LCCC) and is now at Actors Theatre of Louisville as their director of learning and creative engagement. Denise’s passion for working with Louisville youth to express themselves through the arts led her to create an evening summer camp that engaged 52 kids and led to her role at LCCC developing a youth repertory group and teaching kids that there are many jobs in theater arts that can be pursued. All this work culminated in her being honored by Arts-Louisville with the Barbara Cullen Theatre Educator Award at their ceremony Feb. 26. I spoke with Denise about some exciting things on the horizon at Actors and about receiving the award.

Erica Denise: We are revamping the New Voices Festival. It’s been around for about 15 years. It was a huge, very popular program for Actors Theatre. And it started as a residency in the schools. They would take teaching artists and go into the school and teach playwriting, and then, after the residency was over, they would have the students submit 10-minute plays, and it got so big to where they were getting about 800 submissions every year. So, they would choose 10 of them, and then it was it turned into a competition. They would choose 10 of them, produce those shows every year, at the New Voices Festival, and they would fully produce the show using the apprentices that Actors Theatre would have. One thing that didn’t sit right with us [Denise and Robert Barry Fleming, executive artistic director] was the whole competition thing. How do you judge work like that and say, ‘Well, you can’t be produced because of whatever reason?’  We’re taking that competition element out. We’re going to, instead of have it be just like a two or five week residency, we’re going to have it be a year long program after school, where we’re going to — because New Voices isn’t just for play writers and words on the page — you could tell stories through dance, you could tell stories through song, you can tell stories through instrumentation, and so we’re going to have all of those different elements involved. They will start in October, and it’ll go through March and every day, or maybe not every day I’m still working through it, maybe two days a week after school they will come. They will come and get training in these different disciplines while they’re working on their own projects. So if you’re in the dance portion of the after-school program, you’ll be creating choreography and telling your story through dance. If you’re in the acting portion of that you can still write your play or whatever or tell your story through that. If you’re in the music portion of it, you can write your song and tell your story through song. And then in March, it will culminate with a production of all of this new work that the students have produced.

Have you always wanted to be able to make your living as a singer and actor?

You know what? I didn’t know it was possible, and so I always had it on the back burner as a hobby. It was — I’m not gonna say it was a secret passion because people did know that I wanted to sing and wanted to perform. That was no secret, but I did not really say that I wanted to pursue it professionally. Because one, I didn’t think that it was possible. Two, I just never thought I measured up and would be good enough. And I used to, really — what’s the word I’m looking for — honor the fact that I had imposter syndrome. No more. I’m like, there’s no honor in saying that. When I was notified that I was getting this award, the Barbara Cullen Award, and I looked at all of the amazing things that she did,  I’m like, well, somebody wants to honor me in that way, with all of the things that she’s done.  I had to look back and say, ‘You know what you absolutely deserve to be here. You’re not an imposter and you’re going to stop saying that.’ It really wasn’t until I was notified that I was getting this award that I was like, I’m no longer saying that anymore.