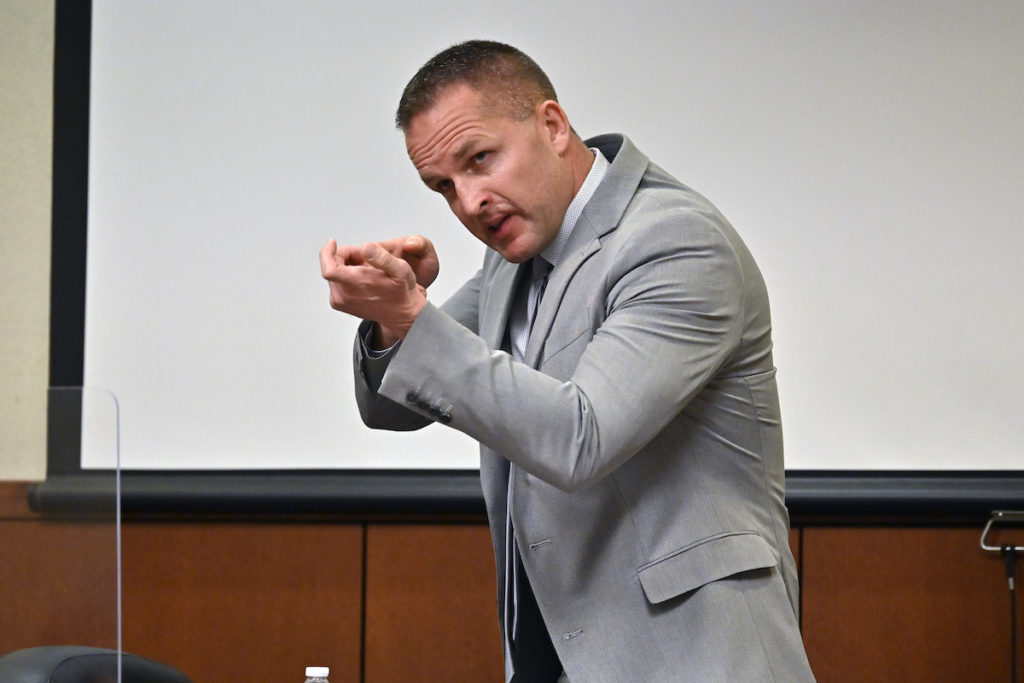 Testifying for more than three hours, former LMPD detective Brett Hankison took the witness stand at his own trial on Wednesday to defend the shots he fired during the botched March 2020 police raid on Breonna Taylor’s apartment. He also used his time on the stand to address Taylor’s family and to apologize to Taylor’s next door neighbors, whose apartment was struck by three bullets fired by Hankison, ultimately leading to the wanton endangerment charges he is on trial for.

“I saw Ms. Napper and Mr. Etherton up here for the first time. And I felt sincere empathy for them,” he said referring to Cody Etherton and Chelsey Napper, the couple who were in the apartment next to Taylor’s at the time of the shooting with Napper’s 5-year-old son. “If my daughter was shot at or bullets came into our house, that would be very concerning. And I apologize to her for that.”

He followed that by addressing Taylor’s family, saying: “She didn’t need to die that night.”

As Hankison said that, Taylor’s mother, Tamika Palmer, got up and left the courtroom.

Hankison faces three counts of wanton endangerment in the first degree — one charge for each occupant of the apartment next to Taylor’s. Wanton endangerment is a Class D felony and each charge is punishable by up to five years in prison. Neither Hankison nor any other officer involved in the March 13, 2020 raid is charged in Taylor’s death. He was fired from LMPD for “blindly” firing 10 shots shots during the raid. None of Hankison’s bullets struck Taylor.

Making frequent eye contact with the jury, and at times crying, Hankison defended his actions during the raid, in which he fired 10 shots into Taylor’s home through a sliding-glass door and bedroom window. He also said he thought his fellow officers were being “executed” by a person inside the apartment shooting a rifle.

“I knew Sgt. [Jonathan] Mattingly was down. And I knew they were trying to get to him. And it appeared to me that they were being executed with this rifle,” he testified.

In the raid, Mattingly was hit in the leg by a single shot from a 9mm pistol that was fired by Taylor’s boyfriend Kenneth Walker as the door was breached. No rifle was found by police at the scene and investigators determined that police shot 32 rounds and Walker fired one round, all from pistols. But Hankison’s perception of a rifle has been a cornerstone of his defense argument.

Hankison described how as the door to Taylor’s apartment was breached, he saw a figure in “an army stance or a tactical shooting stance” inside the apartment as a shot was fired and a muzzle flash illuminated the figure’s silhouette. Based on the sound, the stance of the person and the appearance of the muzzle flash, Hankison said, he believed that the person was firing a rifle.

Hankison repeatedly mimicked holding a rifle, with one hand back, as if positioned on the grip and trigger of the gun with another hand forward supporting the barrel. That position is not consistent with how handguns are fired.

He also testified that as additional gunfire rang out it sounded like “different calibers” being exchanged and that gunshots sounded “like semi-automatic rifle fire.”

“I felt helpless knowing that I had a handgun and was facing rifle fire,” he said.

His belief that there was a subject with a rifle in the apartment led him to put out a radio call for help where he asked officers equipped with rifles to come to the scene. On Tuesday, an LMPD officer who responded to that call described training his rifle on Taylor’s neighbors’ apartment, as Etherton, one of the people who lived there, came to the home’s shattered sliding-glass door.

After Taylor’s apartment door was breached at the outset of the raid, Hankison says he retreated out of the “fatal funnel” in front of the door, turned a corner and began firing at muzzle flashes through the sliding-glass door of Taylor’s apartment.

Hankison also testified that he was unaware that there was an apartment behind Taylor’s, saying he thought the address had two apartments upstairs and two downstairs instead of four on each floor. Despite standing in the small outdoor vestibule where four doors were present ahead of the raid, Hankison said his focus was on the target apartment, and his view was likely blocked by fellow officers who were “large figures.” He said that in a briefing before the raid, no diagrams of the apartment building or maps were presented to the team executing the search warrant.

Asked by his attorney Stew Matthews if he felt like he did anything wrong during the raid, Hankison said “absolutely not.”

Asked later by prosecutor Barbara Whaley if he was concerned that he might hit fellow officers by firing through the sliding glass door, Hankison again said “absolutely not.”

The jury will hear closing arguments on Thursday before entering deliberations.