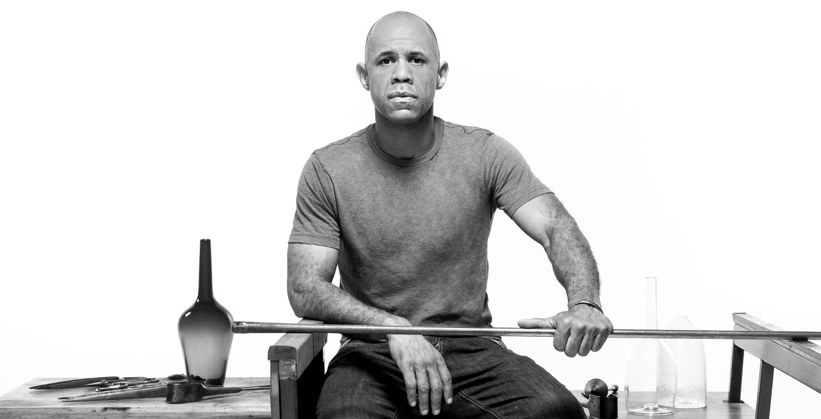 This story was made possible by grant funds from the Great Meadows Foundation.

The roar and swoosh of fires blazing in furnaces reverberate and artist Corey Pemberton raises his voice enough so a small group of visiting youth can hear.

“He’s the master,” Pemberton says, pointing to the man nearby with a t-shirt emblazoned with the words “Better Together” and a shaved head.

In the cavernous glass studio on Main Street, Pemberton, a Virginia-born artist visiting from his Los Angeles home, and fellow artist SaraBeth Post, visiting from Pittsburgh, are working with Ché Rhodes. Since 2005, Rhodes has been the UofL Hite Art Institute professor and glass artist overseeing the glass program housed at the university’s Cressman Center for Visual Arts.

“We both look up to Ché very much,” Pemberton says.

This Thursday evening, they are giving six students from the Smoketown neighborhood’s Steam Exchange Community Arts Center lessons in making glass works using the fire and heat of furnaces and a range of tools. This trio of artists are showing these teens the steps in making glass and giving them hand-on experience, an endeavor headed up by Rhodes.

Since arriving to establish UofL’s glass program, Rhodes’ reputation as an artist and teacher has been solid. But these days, his work has gained a resounding pulse, starting at home with a pair of exhibits at KMAC Museum and extending beyond Louisville with the acquisition of his work into the collection of the Smithsonian American Art Museum and the announcement last week of a national award for his work as an educator in the craft field.

Among KMAC Museum’s exhibits are a group show titled “Crafting the Vernacular,” including works by Pemberton and Post, a UofL alumnus, which Rhodes co-curated with Curatorial Director Joey Yates, and a solo installation of Rhode’s work called “Moments of Longitude.” The exhibit is the subject of The Urban Glass Art Quarterly’s current edition’s cover story.

“Crafting the Vernacular,” on view through April 3, with its work by six glass artists who identify as Black, doesn’t have pieces that focus on the racial violence of the past several years. Instead, Rhodes and Yates, working with participating artists, chose works expressing personal concepts such as those that spring from the artists’ childhoods, common experiences and frequent reflections. There’s Post’s “Bobalobs,” resembling the hair accessory that holds a ponytail. In her piece, two faceted, glass balls are united by a colorful braided hair weave. Pemberton’s works include two trios of glass vessels resembling Zulu baskets with vivid patterns that evoke texture. In making these works, the artist explored his African heritage. Not all works are made of glass. Pemberton’s paintings are here as well as mixed media works by other artists.

Rhodes’ “Moments of Longitude” presents an environment populated by diverse forms of glass globes — some on posts or encased in glass, others elevated near the ceiling and attached to either ropes or chains that hang to the ground. They create an unearthly sensation as they also evoke ideas of the ocean and harbors or even drifting underwater. Rhodes, who is from Cincinnati, says he once considered studying marine biology after childhood years spent visiting his grandparents in New York City, attending a high school in Rhode Island and once studying a semester at sea.

During a February panel discussion at KMAC, Rhodes says the work came out of a challenge he gave to himself to create more personal work. He wanted to address outlooks on death, the space between life and death, as well as what is noble and not noble.

KMAC Museum’s Yates had been talking with Rhodes about working on an exhibit for many years. Then, just before the pandemic, they began to talk more seriously about what an exhibit might look like. “Crafting the Vernacular” and “Moments of Longitude” took shape as the two began to work with the participating artists, many of them also involved in Crafting the Future, an organization Pemberton helped found (he is now the director).

Crafting the Future works to diversify the art, craft and design field by connecting BIPOC artists through providing students with scholarships, and in the past two years, has organized one-day Better Together events that gather these artists and include demonstrations, workshops and exhibits.

Through his relationships with his former students, like Post, and fellow artists, including those in Crafting the Future, and university colleagues, he has gained significant respect.

Post cites how Rhodes has helped Crafting the Future work on big collaborative projects it tackles during Better Together events.

“He’s kind of the ringleader for that and is able to come up with a vision or plan that we can all work on together,” Post says.

While a UofL student, Post says she saw Rhodes as a guide for her and others — helping decipher ways to find solutions to dilemmas and not coddle them. She grows a bit solemn when she speaks about how Rhodes has been her mentor going back to her student days there, a time when she describes herself as “a messy person.” He also helped her more than she expected.

“I had some really major personal things happen while I was in school,” Post says. “Ché was the first person that I called whenever things were happening in my life. That’s just because I knew that he was good at understanding and would be able to help me figure out the next steps.”

The story doesn’t surprise Rhode’s colleague and UofL Hite Institute of Art and Design Chair and artist Mary Carothers. “I’ve heard students literally say that Ché has saved their life or changed their life in a way that has made them a better person and provided them future direction,” she says.

Looking back on his own youth, Rhodes now likens himself to someone who was misdirected and in need of guidance. He says his pathway to a career as an artist was “mostly default.” Growing up in Cincinnati and during his high school years at an elite Rhode Island boarding school he dabbled in music and art. But he also, generated mayhem with what he described as his “subversive attitude” at a high school institution that had a culture with a lot of unhappy boys, he recalls. Instead of graduating, he was kicked out for low grades, but later was able to attend his last year of high school at Cincinnati’s School for Creative and Performing Arts.

Then Rhodes enrolled at Centre College, part of an eleventh-hour decision, and chose art as a major because he knew he always enjoyed those classes. There he met Stephen Powell, the well-known artist and professor who died in 2019. Apart from his parents, Rhodes says no one has had more influence over his life “in every single way.” Rhodes recalls Powell as exceedingly generous, modest and humorously self-assured at times. “I always say, I would definitely be dead or possibly incarcerated if I had never encountered him,” Rhodes says.

Powell’s death hit Rhodes hard. And so do many of society’s problems, which he often seriously contemplates. Now at 48 years old, he says he has become increasingly cynical. While he doesn’t see art as an absolute answer, he believes the humanities are what make us human. So, Rhodes adjusts his work to encourage behavior that would somehow be substantively beneficial or test one’s moral fiber. Case in point: his piece “Labor” in “Crafting the Vernacular.”

For this work, Rhodes created dozens of blue glass bottles for display on a computer-controlled conveyor belt activated by a nearby button on a pedestal. When the button is pushed, the belt moves to send a bottle toppling into a chute. It breaks when it hits the bottom.

The indifferent mentality to breaking glass vessels (and the labor linked to creating them) that are part of “Labor,” Rhodes says, act as metaphors for how we treat labor that have made products throughout much of history. This reflects items created under slavery to those under contemporary unfair labor practices. It also reflects on how we treat items and the environment in general.

Several unknown individuals have pushed the button. But knowing people would be tempted do this and want to make amends, Rhodes set up a system. Two people he saw push the button have used it. Those people each made a $60 donation to Crafting the Future for student scholarships at prestigious arts and crafts institutions, such North Carolina’s Penland School of Craft. (Rhodes, Pemberton and Post studied there, and Rhodes has been a trustee since 2008.)

“You know, they went on the website, thinking, well, I’ll pay $60 — and it’ll be OK,” Rhodes says. However, he still takes issue with breaking the glass, defining it as one that negates the moral, social and environmental costs that went into creating the blue glass vessel.

Like his work with “Labor,” Rhodes often tries to not give into his cynical nature. He thinks about how to set things right and what role his art can play. This was his mindset long before the pandemic and 2020’s racial violence.

This was his mindset when he requested to meet with Mayor Greg Fischer in the early years of his first term after Rhodes was asked to create the sculpture for the Keepers of the Dream Freedom Award. The award, given by the city since 1988, goes to citizens who best exemplify the ideals and vision of Dr. Martin Luther King, Jr.

Before agreeing, Rhodes, a Portland neighborhood resident since moving to Louisville more than 15 years ago, wanted to discuss a few issues of concern with the mayor, the Louisville Metro Police Department among them. Rhodes, whose father was a Cincinnati police officer, says he has observed the main problems being, under-policing as much as it is over-policing in areas. When Rhodes and Fischer met, Rhodes says the conversation never progressed to a subject past policing. Over nearly a decade of creating the award, he met with the mayor’s office a few other times to continue the conversation, he says. At one point, Rhodes was referred to the chief of police, he says, but the city addressed very few issues discussed.

When a representative of the mayor’s office wrote him last year about creating the 2022 prize, Rhodes, reflected on the events of 2020 and the city’s lack of progress in addressing issues he had first raised a decade ago. He declined to continue making the prize.

Meanwhile, Rhodes has plenty on his plate in addition to his responsibilities as a university professor. In January, the Smithsonian American Art Museum announced it is acquiring of one of Rhodes’ works which also will show in an exhibit titled “This Present Moment: Crafting a Better World,” opening May 13 in the museum’s Renwick Gallery in Washington, D.C. To top it off, last week Rhodes received notice he has been chosen to receive the James Renwick Alliance for Craft’s Distinguished Craft Educator’s Award in an event just after the exhibit’s opening. The award is a sweet success as Rhodes’ mentor Powell received it in 2012.

But even with the accolades, he doesn’t seem affected. “I don’t need to be appreciated,” he says. Still, he is grateful, especially considering he didn’t know he “was on anyone’s radar.”

Meanwhile, another unexpected gift recently arrived in Rhodes’ life — a new student. This semester in the UofL glass studio Rhodes runs, he began teaching his late mentor and great friend’s 20-year-old son Oliver Powell the art that bonded the student’s father and Rhodes.

“It is really,” Rhodes says with a pause, “kind of the most amazing, meaningful thing I could ever imagine.”