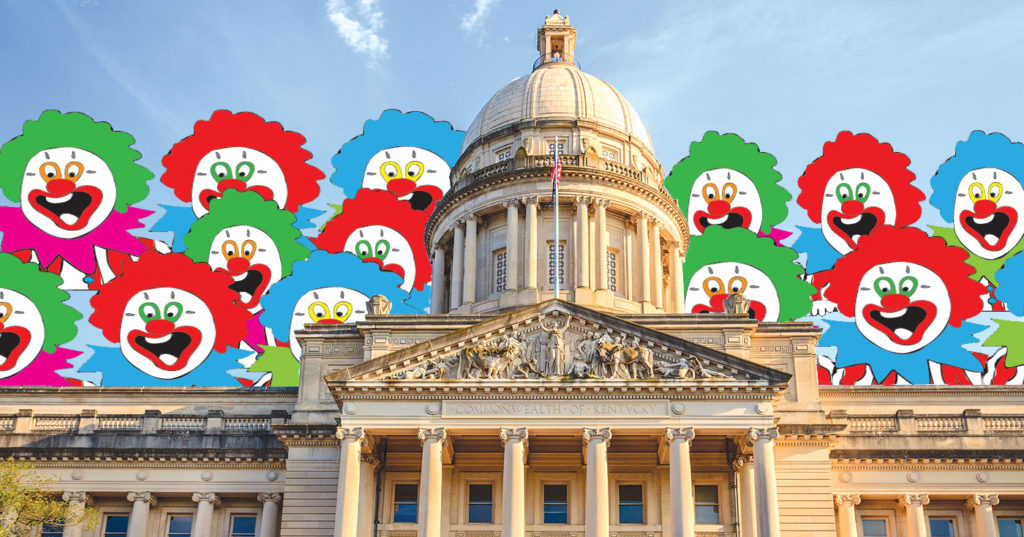 The Kentucky Capitol is filled with clowns.

It happens every year: The legislative session starts out slow. There are some bad ideas being floated around — and some good ones — but they are just that. Ideas. You think that the Republican supermajority couldn’t possibly stomach stripping away public assistance, gutting public schools and finding yet another way to restrict abortion in Kentucky — all in one session. But then the home stretch is in sight and… it happens.

Over the course of two days this week — Tuesday and Wednesday — legislators passed a flurry of bills before the veto period begins. Now, if Gov. Andy Beshear rejects their legislation, they can override it.

They took the opportunity to pass bills that most people with souls, like Beshear, would find distasteful. Here are eight of them that you should be mad about. Take note of the names attached to them.

House Bill 3 is a layered, omnibus anti-abortion bill sponsored by Rep. Nancy Tate (R-Brandenburg) that would amend state law to make it harder for minors to get abortions in cases when a parent is not able or qualified to provide written consent, as well as restrict access to abortion medication. It would also ban abortions after 15 weeks of pregnancy, overriding the current law, which bans abortions after 20 weeks of pregnancy — similar to a controversial and legally-contested Mississippi law.

Senate Bill 205, sponsored by Sen. Robby Mills (R-Henderson), would require the state treasurer to maintain and publish a list of financial companies that they believe are boycotting energy companies that deal in fossil fuels. Warnings to those companies would follow and there would also be a path created for government entities to divest from said companies.

Missing out on state revenue

Kentucky lawmakers passed a bill cutting the state’s income tax, which might make you rejoice until you think about this: The state will lose out on over $1 billion in revenue over two years because of it, according to a fiscal note. And the cut will primarily benefit Kentucky’s one-percenters: The Kentucky Center for Economic Policy reported that a 5% to 4% cut would stick an extra $11,056 in the pockets of the top 1% while the bottom 20% would only see a measly $20. The passed bill, HB 8 (sponsored by Rep. James Petrie, R-Elkton), could cut Kentucky’s current income tax rate of 5% by half a percentage by 2023, with more decreases proceeding that. Meanwhile, the state budget is leaving teacher raises and more on the table this year (although the budget bill does contain funding for universal pre-K, which is a bright spot.)

Making it harder to get public assistance

Kentucky Republicans are making it harder to get public assistance based on a premise that Democrats say is mostly false: That there is fraud that needs to be cracked down upon. Senate Minority Leader Morgan McGarvey pointed out on the Senate floor yesterday that the rate of fraud in Kentucky’s food assistance program is less than 1% and that the state already investigates and charges intentional program violations at a high rate. The bill itself , HB 7, (Rep. David Meade, R-Stanford, Rep. David Osbourne, R-Prospect) sets up extra burdensome rules to access food and medical assistance in the state.

The war on drugs is not over in Kentucky. Lawmakers passed a bill, HB 215 (Rep. Chris Fugate, R-Chavies), increasing penalties for fentanyl traffickers. The only problem is that addicts themselves can often be labeled as traffickers. This particular bill would increase the minimum amount of time that convicted offenders must serve from 50% of their sentence to 85%.

House Bill 248, sponsored by Rep. Daniel Elliott, R-Danville, would limit the governor’s power by only allowing the attorney general to use state funds to challenge the constitutionality of a bill passed by the General Assembly. Basically, the Republican super majority is still big mad at Beshear for calling them out on their bullshit.

So much for local control. JCPS has come up with its own school security plan, trying to find a compromise between parents and board members who wanted police in schools with families of color who said that it made them feel unsafe. Their solution was to assign an officer to a group of schools instead of just one. But Louisville Rep. Kevin Bratcher wants to push JCPS further, penning a now-passed bill that requires schools to go over their plans with the state government. Schools will also be required to assign one officer to each school campus if the funds and officers are available.