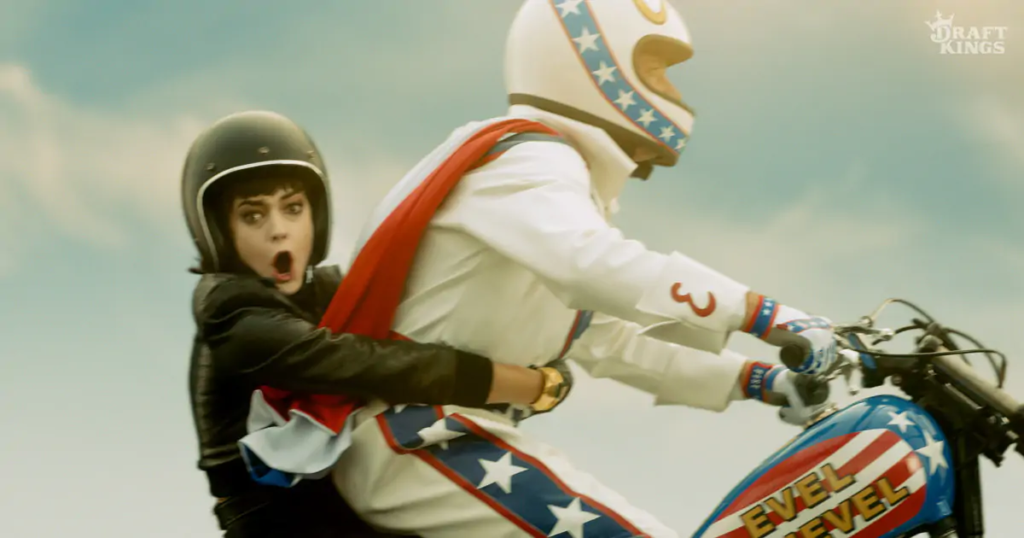 Emily James is from Louisville and the new mascot for DraftKings.Photo via DraftKings

If you watched the Super Bowl last night, you might have seen a Youth Performing Arts School alum during a commercial break.

Emily James, who graduated from the duPont Manual High School performing arts magnet in 2011, appeared in an ad campaign for sports betting company DraftKings as their new mascot, the Goddess of Fortune (also referred to just as “Fortune”), promoting their “Free Million Dollar Bet” campaign for the Super Bowl.

The video aired during the third commercial break of the first quarter last night.

(Don’t worry if you missed the “Million Dollar Bet” campaign — ironically, it wasn’t open to Kentucky residents anyway as sports betting is still not legal in the state.)

In the ad, “Life’s a Gamble,” Fortune jumps off the DraftKings blimp, intercepts a field goal atop a goal post, interviews a young Joe Namath, does a motorcycle stunt with Evel Knievel, tattoos one half of a couple and drives on the Super Bowl field with modern-day Namath.

It’s a high-adrenaline series of events. Fittingly, the commercial’s director is Doug Liman, who also directed “The Bourne Identity” and “Edge of Tomorrow.”

James, who took a break from a rom-com she’s filming at the American Film Institute in Los Angeles to speak with LEO today, said her own excitement has been equally high.

“I’m just really overwhelmed,” she said. “I’ve got so many texts and so many DMs that I feel like I need to respond to, but I think I can take my time,” she joked.

Even though she’d already seen the video multiple times before it aired, watching herself last night “honestly didn’t feel real.”

“It’s just kind of slowly hitting me,” she said. “My brain isn’t comprehending it.”

That’s to be expected, though — her first ever commercial project just so happened to be a Super Bowl commercial.

James is primarily a stage actress who has appeared at the Geffen Playhouse and other theaters in Southern California. She says that her theater experience was crucial to getting the role of Fortune, and she credits YPAS for her career successes thus far.

“I honestly don’t know where I would be without YPAS,” she said. “The foundation that they gave us was so professional and so college-level.”

James transferred into YPAS as a junior in high school. At her previous high school, Christian Academy, she’d only had a minor role in one play, so she initially felt like she was behind her YPAS classmates — as she points out, YPAS students “were training for two hours a day, every day, even when we were 16 and 17.”

But taking an intensive acting class with Georgette Kleier and studying theater legends like Stanislavski motivated James to “play catch-up” and deep-dive into the field by reading plays and doubling down on her theater studies. (Disclaimer: James and this reporter were in one of Kleier’s directing classes at YPAS together.)

In a follow-up text to the author, James added that Kleier’s “incredible teaching changed [her] life and set the foundation for [her] love of the craft.”

“It was my first ever acting class,” she wrote. “I was just mind blown and instantly caught the acting bug.”

According to a recent AdWeek article about the campaign, this won’t be your last opportunity to see James as Fortune — the character will also make appearances with DraftKings in the future. Currently, she also appears frequently throughout the company’s social media.

You win, I pay. Fortune favors those who put it on the line. pic.twitter.com/DRh9ljAUnA

You can also watch her in a teaser ad, “Fortune Awaits,”  that debuted earlier this month.

Beyond that, James said, “I’m very excited to see where this is gonna lead. I definitely want to transfer it over to cool roles on TV and film.”