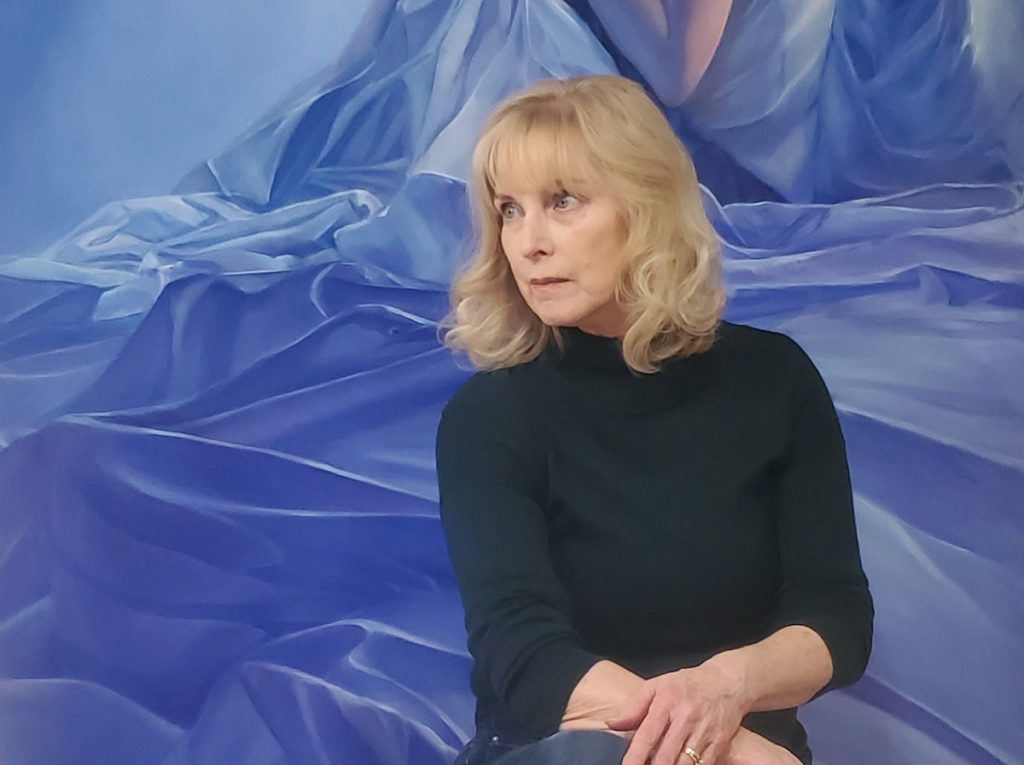 Debra Lott and her painting "The Blue Heron," which is among the pieces of art heading to the moon as part of the Lunar Codex project.Provided photo

Art is heading to space, and two Louisville artists are among those chosen to put works in two time capsules.

Artist Heather Brunetti creates realistic paintings and portraits and is one of the artists chosen to send her work to space. With her, fellow Louisville artist Debra Lott will also have work traveling to the moon. Brunetti and Lott’s work along with several other artists’ work will be added to two time capsules, “a main capsule and a second one for redundancy.” The first capsule will launch sometime this summer, and the second will launch in the fall of 2023.

The addition of Brunetti’s and Lott’s work to the capsule will make them two of the first female artists to have work sent to space. The last time artists were sent to the moon was in a small “mini-museum” attached to the leg of the lunar module Intrepid and left on the moon during the Apollo 12 mission. That capsule contained the work of six male-only artists.

Samuel Peralta, a doctor of physics and artist, is the executive director of Incandescent, a company that provides investment, development and strategic advisory to tech and media companies. Incandence is overseeing the time capsule project, which is known as the Lunar Codex.

LEO asked Brunetti and Lott a few questions about their involvement with the project. Here’s what they shared via email:

LEO: How did you get the opportunity?  Did you think it was a joke when you were asked?

Heather Brunetti: ‘Pearl’ was included in the project by Samuel Peralta who first came upon my work when he curated the art exhibition ‘Shelter’. I first was notified by PoetsandArtist when ‘Parting Ways’ was included through their publication at the beginning of the project. I was definitely intrigued, but knew of Samuel Peralta and all the incredible things he does so I was not surprised.

Debra Lott: The opportunity came to me through an art competition offered through 33 Contemporary Gallery with the theme of ‘Shelter’. My painting, Blue Heron Dreams was selected by the curator of the competition, Samuel Peralta . Later Samuel Peralta  announced his project – the Lunar Codex- and selected artists form [sic] his curated exhibit- Shelter to be included. The art director of 33Contemporary announced this news to the selected artists so – no- I did not think it was a joke.

What are your thoughts about sending your work into space?

Brunetti: I’m humbled to be included with so many incredible artists. I think it’s amazing to have created something that will have a reach far beyond what I could ever have imagined. I find it fascinating to learn of all the places my artwork goes after it leaves my studio. They have their own “lives” and stories. ‘Pearl’ by far will have the best story yet.

Lott: This is an amazing opportunity and definitely a once in a lifetime opportunity. It’s wonderful that Peralta- a creative artist himself has included select artists and creatives in his project. It gives me and other artists an opportunity to feature our work in a very unique way.

Do you get to travel to see the launch?

Brunetti: I don’t have details about the exact launch date yet. I’ll probably enjoy it from afar if they stream it.

Lott: Of course I never dreamed of my art or anyone’s going into space. It’s taking some time to get my head around it and how extraordinary it really is. I’ve witnessed space travel from the beginning at a very young age – especially growing up so close to Cape Canaveral. I’m not sure if artists are invited to the launch but Peralta has stated that it will be streamed and he will have first  access to images and videos so I’m sure he’ll share with the artists.

“Special payloads are carried on space-bound objects secondary to the primary mission. In this case the capsules use analog and digital technology to store their data. The analog capsules use Nano Fiche technology which stores 150,000 pages of material on a sheet the size of printer paper. The digital capsules are similar to traditional memory cards.

Contained in the capsules will be an impressive collection of art, from illustrative to stories, poetry, films, music and more.  Peralta has curated most of the items himself including Brunetti and Lott’s work which were both part of a Chicago exhibition in which artists were to depict the idea of ‘Shelter’. Brunetti’s piece entitled ‘Pearl’ is a beautifully realistic portrait of a woman lost in gaze out a sunlit window. Lott’s selected painting, ‘Blue Heron Dreams’ is part of a series titled, “Dreams of My Daughter.” This painting depicts the dream world of a young woman responding to anxieties in her sleep, similar to those suffered during the Covid pandemic. Brunetti has a second piece, which will be included through a PoetsandArtists publication featuring work from an Australian Exhibit entitled ‘Storytellers’ where her piece ‘Parting Ways’ was displayed.”