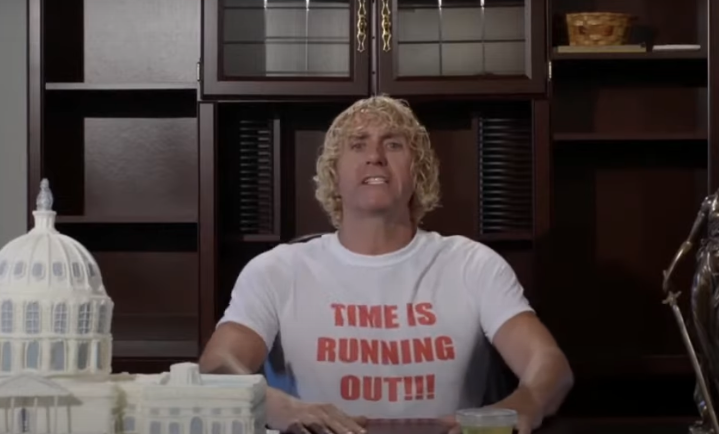 George Foking Washington, besides running for Congress, has made an interesting series of YouTube videos.Photo: YouTube Screengrab

If you think U.S. Rep. Thomas Massie — who recently tweeted a quote from a neo-Nazi claiming it was Voltaire — is the most bizarre person running for Kentucky’s 4th District, you would be wrong. Earlier this month, Alyssa Dara McDowell — who is best known for rushing the stage at a GOP watch party to falsely tell the crowd that Matt Bevin was elected governor before being escorted away — filed to run for the seat.  Then, last week, George Foking Washington formally entered the seat’s royal rumble. Washington’s campaign website is called flushthecommode.com and contains a series of wacky YouTube videos including one in which he pours what appears to be urine on the Capitol building. He also compared the news media to a condom with a hole in it. Charmed, we’re sure.

Kentucky is more than 2,000 miles away from Silicon Valley, but even we’re not safe from obnoxious tech bros. A local group of entrepreneurs have teamed up to create a collection of Derby horse themed NFTs, which if you don’t know, is “exclusive” digital art that you can’t do much of anything with besides brag that you have it. Admirably, Party Horses LLC is trying to combat the inherent uselessness of an NFT by throwing in real-life items and experiences like a Derby party. Now that we think about it, it’s not such a bad idea to corral all the Bitcoin buddies into one space so us normal folk can enjoy the first Saturday in May without hearing about Elon Musk’s latest asinine tweet.

Welcome to 2022, when a scandal isn’t an opportunity to think about any wrongdoing — but is a great chance to run for office. William Bennett, the Marion C. Moore School teacher fired for fighting a student last August, is now running for a state House seat in Elizabethtown. Tell us, did he display the levelheadedness required in a leader when he pinned a 16-year-old JCPS student to the ground and pulled his hair during a confrontation?

Clark Memorial Hospital in Jeffersonville is now the site of a free, 24/7 Naloxone vending machine. Turns out, it’s one of 19 that will be deployed across the state at jails and medical sites thanks, in part, to the state government. We love to see innovative, humane responses to the opioid crisis. Safe injection sites would be a great next step.