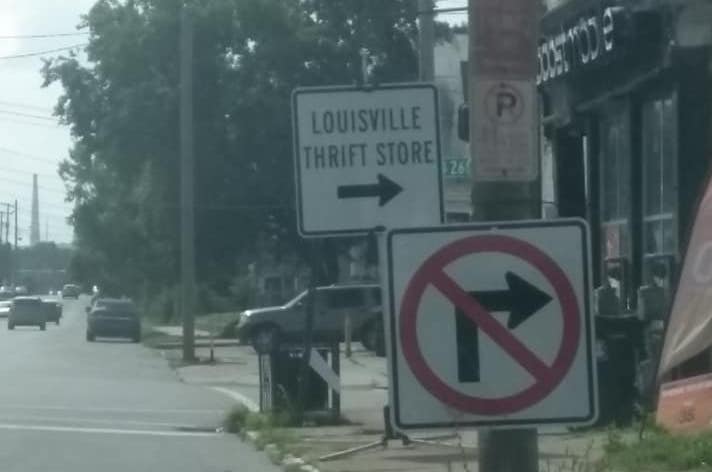 After 14 years in business and a legacy of helping the community, the Louisville Thrift Store (2540 W. Main St.) is closing.

The Black-owned thrift store in Portland had already gone through troubles at the start of the pandemic: they had to close for two months in 2020 and were denied PPP business loans.

Last summer, though, things took a hard turn for the worse: the Louisville Metropolitan Sewer District set up road signs and barricades around the store while they worked on a sewer project from June through December, making it difficult for customers to get to or find the place, minus some foot traffic.

“I lost 90% of my business for six months, which is hard to survive, especially when I was already down because of the pandemic,” said John Scott, who owns Louisville Thrift Store.

But even beyond the MSD situation, he said, December is already a difficult month for a secondhand shop: around Christmastime, customers tend to buy new items more often than used ones.

The store will have to close by the end of this month. Until then, it’s having a going-out-of-business sale.

Scott and his late brother opened the store in 2008. Scott told LEO that the last place he ever saw his brother was inside the store; he still says good morning and good night to him every day when the store opens and closes.

“When we opened up, me and my brother, we wanted to be rich,” Scott said. “My mission changed after a while where I just wanted to help people.”

Even through its hardest periods of struggle, the store has always been a fixture of generosity in the Portland community. Scott says he has hosted hundreds of events for the public over the last 14 years, including Christmas parties with Santa, Halloween parties, a haunted house, and free breakfasts. At the Christmas parties, Scott even made sure that Santa gave every child money. He also had a recurring feature on Saturdays where a few customers would be selected to receive a free $25-$50 shopping spree inside the store.

Even through his own financial difficulties, Scott says he is sympathetic to others who are struggling.

“All stores have shoplifters,” he said, “but we see people stealing all the time and we let ’em go. What they didn’t know was, if they asked for it, we would have gave it to ‘em. We figure, if you’re stealing at a thrift store, you must really need it.”

Scott, who is 70, drove for DoorDash last year to pay his dues to the store’s landlord until his back pain made it impossible to continue — as he said, “For a 70-year-old person, getting out of a car 20 or 30 times a day, it’s not easy.”

Still, Scott doesn’t begrudge the landlord, whom he says was also hurt by the store’s loss of income over the last eight months. Scott said that if he had the money for it, he’d find another location for the store — ideally in the same neighborhood.

“I don’t want to leave the Portland/West End area, that’s one thing for sure,” he said.

There are a lot of good people in the area, he said.

When LEO asked what else he wanted our readers to know about his situation, he said, “Just let ‘em know that I’m gonna miss ‘em all. I’ll miss the people and doing things.”

“I made a lot of friends, and I was happy to serve them for 14 years.”

If you’d like to support Scott, he is accepting donations via CashApp ($louisvillethrift) and Venmo (@louisvillethrift; select “Businesses” when you search for the account name.) The store is open for the time being every day Monday through Saturday from 9 a.m. to 4 p.m.