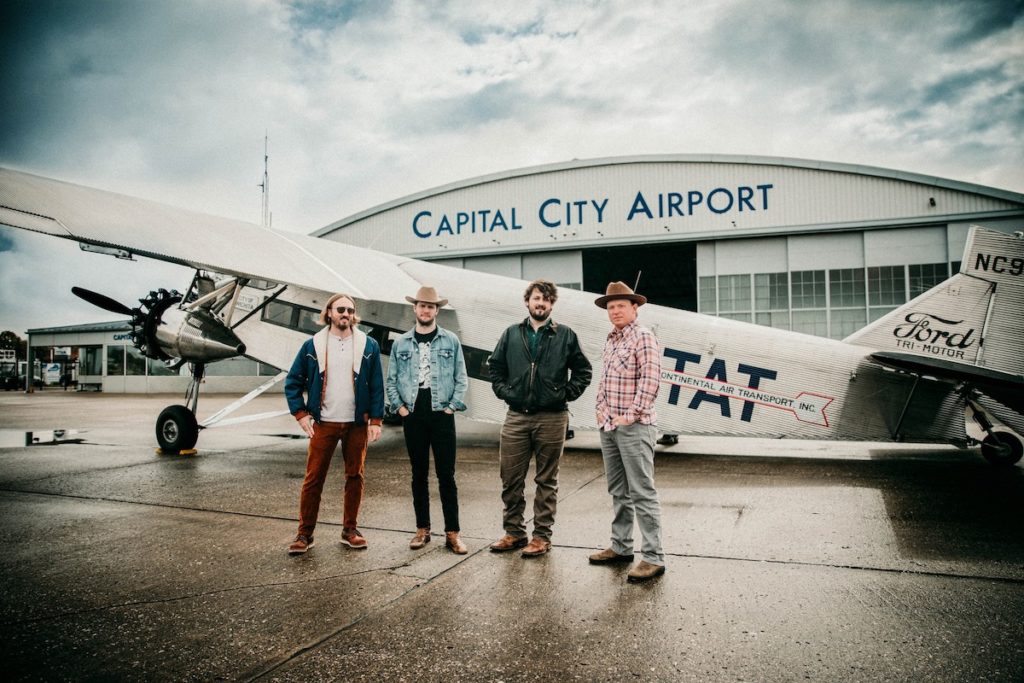 The Wooks' new album Flyin' High pays tribute to Tony Rice, the guitarist for J.D. Crowe and the New South.Photo via The Wooks/Facebook

The Wooks are a regional string band with ties to both Lexington and Nashville. Over the years, the act has developed a distinctive style and cultivated a faithful fanbase through its original songcraft and master-level musicianship. We recently caught up with founding member CJ Cain to discuss his love for J.D. Crowe and Wendell Berry, as well as his group’s stellar new album, Flyin’ High, whose Louisville release party is happening this week at Zanzabar.

LEO: The bluegrass world lost another legend recently. And this one practically lived right down the road from you. What are your thoughts on J.D. Crowe and his legacy?

CJ Cain: You could probably make a good case for several people to be in that No. 2 slot as far as all-time greatest banjo players after Earl Scruggs. But for many of us in the field, it would be J.D. hands down. He’s someone that everyone wanted to be but yet he was just a regular, approachable guy that you could have a meaningful conversation with whenever you saw him around town. He had a great sense of humor, too.

Tony Rice was, famously, the guitarist for J.D. Crowe and the New South at one time. Could you speak to the connection between him and the latest Wooks LP, Flyin’ High?

I only got to hang out with Tony as a peer on one occasion. That was at RockyGrass, and my buddy Chris Eldridge [of the Punch Brothers] was prodding him to tell stories about living in Lexington back in the day, mostly for my benefit. But for me and countless other musicians, Tony’s lasting influence was profound. So, after his passing last year I knew I wanted to honor him in some way on the record we were making. I don’t know why, but it occurred to me that maybe I ought to look up Bill Wolf to see if he would have a go at mastering the tracks. I honestly didn’t even know if he was still kicking. But he was, and he agreed to work on our project. For a guy who had a hand in shaping all of the quintessential albums in the Tony Rice canon, and a lot of other iconic releases, it was amazing to see how much work he put into this one. And the results are priceless. Next time, we’re going to get him involved earlier on in the process because he said he wants to set us up in the same sort of configuration he used when he recorded [Rice’s supergroup] the Bluegrass Album Band.

LEO: Some of the covers you perform, like “Dear Prudence,” and “Sisters and Brothers,” were also staples of the Jerry Garcia Band’s concerts. As an ostensibly bluegrass ensemble, what sort of cues do you take, generally speaking, from the Grateful Dead universe?

I mean, just being a fan of that band became a lifestyle for a lot of people, so obviously there are a lot of lessons you can learn from what they did to build a loyal following and so forth. On a more personal level, Old & In the Way [another Jerry Garcia side project] was one of the groups that first got my dad excited about bluegrass. And his intense interest got extended to me and that’s how I fell into it at such a young age. The Wooks have actually been known to do quite a few Dead-related tunes, depending on who was in our lineup, and which parts of that songbook they were drawn to.

LEO: Speaking of line-up changes and transitions, what do you think about [former Wooks member] Jesse Wells’ subsequent creative partnership with Tyler Childers?

I think Tyler owes me big-time! I’m just kidding. They’re both still two of my closest friends. Jesse’s a great fiddler, but with Tyler he also gets to play electric guitar, banjo, mandolin, and whatever else you want to put in his hands. It’s worth noting, however, that Jesse has appeared on every Wooks album so far, including the new one. We got him to come back and participate, which was pretty cool.

LEO: At this point in your career, how do you measure success?

Whenever I hear someone in the audience singing along to words that I wrote, it  makes me feel like I’m doing something right as an artist. Having Wendell Berry — who was one of my biggest influences as far as writing lyrics — come up after a set and tell me how much he enjoys our music was another benchmark.

The Wooks’ album release show takes place at Zanzabar on Thursday, Feb. 24. The Dirty Grass Players will be playing as well. Doors open at 7 p.m., and the show beings at 8. Tickets are $18. You can purchase them here.