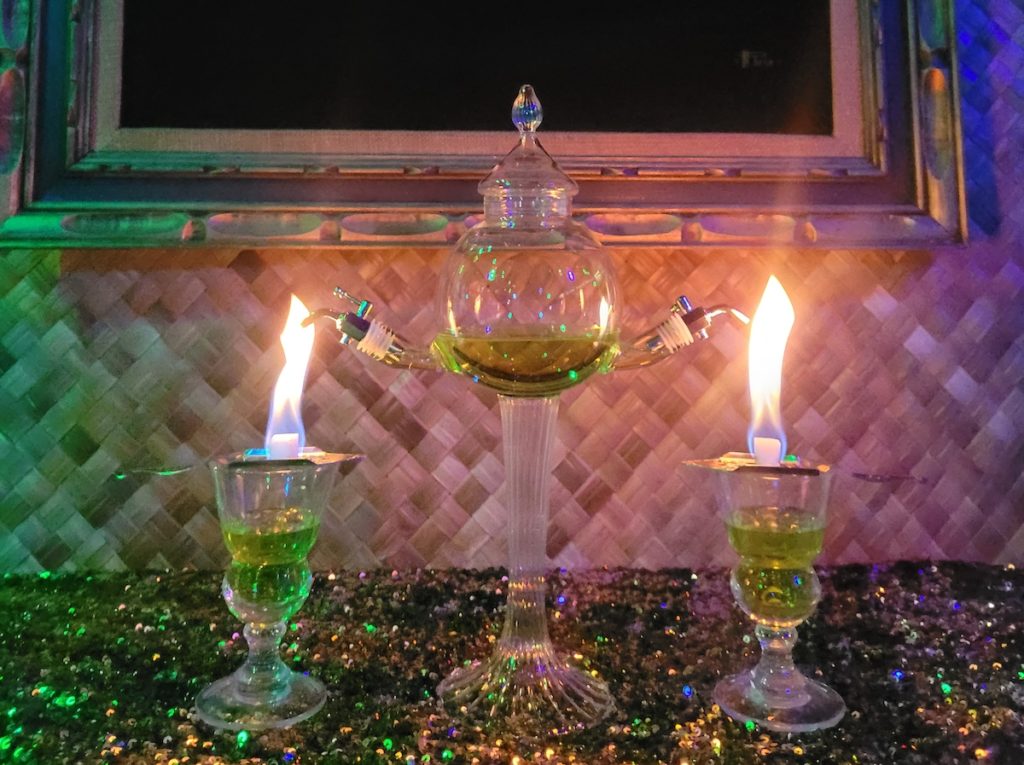 The green fairy is descending upon The Limbo through March.Photo courtesy of Olivia Griffin.

The Limbo, a tiki bar downtown (411 W Chestnut St.), will open a pop-up this Friday called The Green Fairy Lounge, which will be themed around absinthe and the musical “Moulin Rouge.” The pop-up is slated to run through March.

The Green Fairy’s libations menu will, of course, include plenty of absinthe, which you can get in a flight of four or in a French 75 cocktail flight that also features traditional gin creations. There’s also a Sazerac, sidecar and French Connection on the menu.

This isn’t the first time that The Limbo has operated a themed pop-up; in December, the bar was full of Christmas paraphernalia amongst its tropical decor for a “National Lampoon’s Christmas Vacation”-themed pop-up, which featured drinks like “Bit Nipply Out” and “Eat My Rubber.”

Olivia Griffin, who owns The Limbo and its next-door neighbor Riot Cafe, told LEO that Christmas Vacation will return this December. There’ll also be a Tim Burton-themed pop-up in October and November to carry the bar from Halloween into Christmas. This, she said, will appeal to the people The Limbo attracts: as she described them (lovingly), “dark, quirky, queer weirdos.”

Once The Green Fairy is over, her next focus will be revamping The Limbo’s patio to add growing space for edible plants.

Griffin is a longtime fan of “Moulin Rouge.” Its main themes — love, glitz, sex, and camp — work for both Valentine’s Day and Mardi Gras, which gives the pop-up two months of longevity. (Of course, green also works for St. Patrick’s Day.)

A love-and-sex theme is also a natural fit for a bar that hosts kink events regularly throughout the year. One upcoming Mardi Gras show, “Fat Fat Tuesday,” will feature only plus-size performers.

But Griffin and her staff aren’t just doing this pop-up for fun: they’re doing it to offset a concerning drop in traffic.

Recently, Griffin made a public post on Facebook saying The Limbo was at its lowest point financially ever due to snowstorms, a lack of activity downtown and insurance premiums.

While it’s not uncommon for winter to be slow at The Limbo, Griffin told LEO that niche downtown venues like hers suffer more than other bars.

“We really rely on tourism and business travel foot traffic, and because we’re not a neighborhood bar, we don’t have those nightly 15-75 people that will pass through,” she said. “We are still battling the issue of locals not wanting to come downtown for a variety of reasons: for COVID, because of the protests that happened [in 2020], people don’t feel safe, because of the weather. Trying to get people to come downtown who don’t live downtown or near downtown is like pulling teeth.”

Griffin ended her recent Facebook post asking for patrons to help by visiting her bar during the month of February.

“We are a part of the fabric of what makes Louisville cool and weird,” she told LEO. “We just want to welcome more locals to seek us out and come find us.”