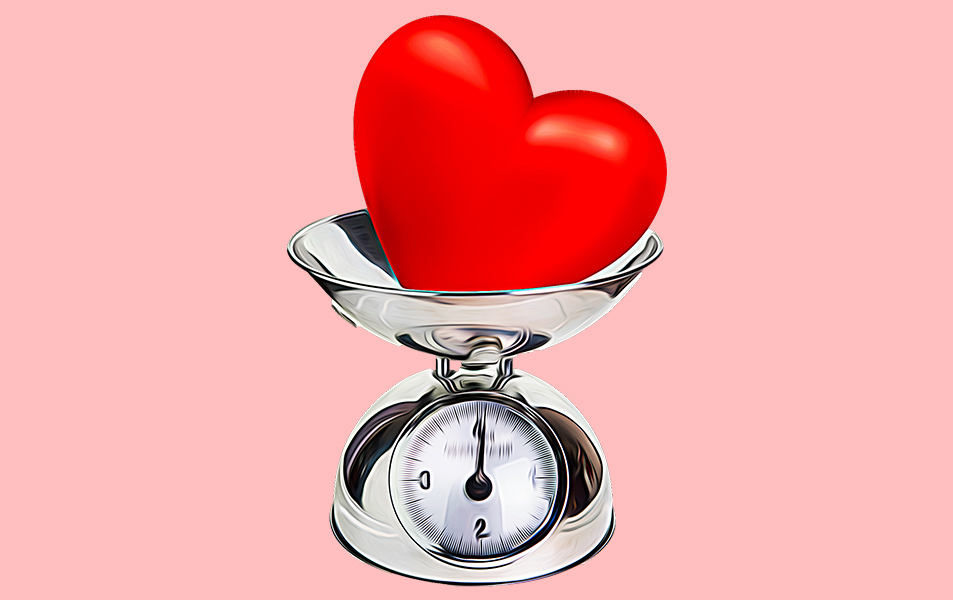 [This essay was written by an anonymous Louisille writer. Some names and identifying details have been changed to protect the privacy of individuals in this story.]

A few miles away from my tiny storage-closet-turned-bedroom, the financial analyst in Westchester was begging me for photos of my belly. He was desperate for details: Was it hairy? Was it round? Saggy? Did it have stretch marks? Lots of them? Did it hang over my waistband? Why didn’t I want to show him what it looked like? Just one photo? Please?

I left him on read. This man was an FA — a “fat admirer,” a man who likes fat women — and this was the beginning of my second attempt to date within the FA community. I was back on the fat dating site Feabie (pronounced like “Phoebe”), resurrecting a long-dormant account, but all I was getting so far were unsolicited sexual comments with no respect for my boundaries and men who were flaky about conversations. I was a few weeks away from changing my bleak perception of the community, but I had to wonder: is this my romantic lot in life?

But in the fall of 2017, the in-person world of fat fetishism and fat admirers (FAs) was a new venture for me, and I was eager to explore it. Following a traumatic summer fling with an emotionally abusive (and closeted) fat admirer and a two-year break from dating and sex, I decided that I was ready to give FAs another try.

My first Feabie date was with a six-foot-four programmer and part-time standup comedian named Albert who sported Dahmer glasses and thick headphones. We met at a noodle restaurant in Chinatown, halfway between his apartment and mine. His knees scraped the underside of our table. Rather than taking the train, he insisted on walking the entire length of the way there and back, across the Brooklyn Bridge, in the early October cold.

I was newly awash with free time, thanks to dropping two classes at school to accommodate the demands of a freelance client, and eager to fill it with the privilege of being a single woman in New York City. Albert’s last date (his first ever from Feabie) had ghosted him, so he wanted to prove that I was, in fact, real, and that he could make a good connection with a woman from the site. Fascinating idea: that a fat woman could be the object of desire to the point that he would be disappointed by her ghosting him.

It didn’t work out. I wanted to talk; he was very introverted; our senses of humor didn’t really align, and a bunch of my jokes didn’t land. We now follow each other on Instagram, but that was the end of it. I probably exist in one of his standup routines.

A few weeks later, I got an intriguing message on Feabie. On my profile, I had written: “Take me to a wrestling match, improv show, or concert — bonus points if it’s yours!”️

Out of the many heys and hellos and what’s ups in my inbox, this new message was a welcome relief. It read: “I can take you to a pinball tournament!”

The message was from Connor, a 26-year-old engineer who looked like a mashup of James Franco and Nick Jonas. He lived outside of Nashville, where I was born; our initial conversation established that we’d even been born in the same hospital.

Over the next two weeks, he and I began to talk every day. I was fascinated: unlike many other Feabie guys, he was never overtly sexual, and he always typed in full sentences. We talked at length about the world of competitive pinball, then gaming, then politics, then journalism, then our day-to-day lives. It was the beginning of something beautiful, and I was certain of that.

Then I straight-up ghosted him for four months. It wasn’t on purpose, per se; I just happened to meet the guy who would be his predecessor, my 34-year-old Russian painter now-ex, at a bar, and we hit it off right away. When that relationship crashed and burned, Connor was the first person from Feabie that I wanted to talk to again. He had already forgiven the ghosting, and it wasn’t long before we were making plans to see each other in person.

Thus began the most impactful vacation of my life.

Funnily enough, one of the most revelatory parts of my trip was watching TLC shows with Connor. I have a love-hate relationship with TLC, and TLC has a love-hate relationship with fat people. They don’t love us, but they certainly love making money off of us. Their current and past shows include titles like “1000-Lb Sisters,” “Big Medicine,” “Big Sexy,” “Too Large,”” I Eat 33,000 Calories a Day,” “My Big Fat Fabulous Life,” “Hot & Heavy,” and, of course, “My 600-Lb. Life.”

I couldn’t get enough of Connor’s comments on the YouTube clips of these shows that we watched on his big-screen TV. He pointed out the hypocrisy in a mini-documentary about a feeder/feedee relationship (a relationship where one person feeds the other for sexual pleasure): namely, that the video spliced clips of a condescending doctor between the main subjects in a way that made them look careless. Connor said that a documentary about hobbies like, for example, motocross would never do that; that, if anything, the risks would only be mentioned as something that the participants were bravely conquering, not dismissing.

We also watched a video that parodied the episode of Saved by the Bell where a fat girl wins Zack in a date auction, much to Zack’s vocal dismay. I asked Connor a rhetorical question: “You wouldn’t be complaining if a fat girl won you in an auction, would you?”

Connor’s directness about fat bodies was new, and it changed how I referred to myself. Rather than calling myself more delicate terms — “plus-sized,” “curvy,” “bigger” — I started to more often acknowledge that I was straightforwardly fat. Around him, I talked frankly about my cellulite and my wide upper arms. He loved my double chin and even called me his “body pillow” when we cuddled. It was a blunt truth, but he wasn’t wrong: I was fat, and it wasn’t a problem.

Connor was almost everything I wanted in a guy: he had a steady income, a tidy apartment, and a job that allowed him to work from anywhere; he was handsome, and he was interested in me. In fact, on one of our first dates to a lakeside park, he asked me what kind of wedding I might want. Even the banalities of living with him for two weeks — getting groceries together, cleaning, etc. — felt so natural.

Still, he was unquestionably a straight twentysomething man — he didn’t own a can opener and mostly cooked himself chicken and broccoli. One of his kitchen cabinets was filled with old Nintendo controllers. Yet it was easily forgivable. Nearly everything else that I wanted in a long-term relationship was there and within reach.

As an FA, Connor was a tour guide in my homeland, a fluent speaker of my native language. Not only did he understand the more uncomfortable truths of plus-sizedness –– we sometimes need special furniture; we may need to take breaks when we walk; we do often like large portions of food –– he wanted to accommodate them as much as possible. He spoke fondly of his future plan to build a “fat-friendly” one-story house. He was always patient with my endless questions about the finer details of his kinks and the FA world as a whole — a matter of curiosity, not prurient interest.

A few offhand remarks of his did throw me occasionally, though. When Connor made reference to a particular element of his fetish, I responded with confusion. He heaved a frustrated sigh.

“You’re one of the few people who knows about this side of me,” he said, closing his eyes.

“Few” was a curiously relative term; he had been to (and had been very, ahem, active at) a number of “bashes” — parties for fat women and their fans. Still, when he confessed his attraction to fat women to a college frat brother several years prior, the friend warned him, “I wouldn’t tell anyone else about that if I were you.”

In that moment, as I was sitting on his couch half-naked, the absurdity of it all came rushing over me. He was totally fine to hold hands with me in public, to make out with me in public, to be assumed a couple in public, to go to restaurants and the beach and multiple parks, to tell his closest friends that I was staying in his one-bedroom apartment for two weeks, but for them to think that he might want to have sex with other women who looked like me — well, that was just too far.

A wicked irony about my relationship with Connor is, although his attention and affection cured a lot of my insecurities, there was one thing that they unintentionally made worse.

Connor didn’t want me exactly as I was. He wanted me to get bigger.

It’s not like I should’ve been surprised. I can’t pretend I didn’t see him sneak a glance or three at even larger women as we were walking or driving around town. I’m not blameless there, though; I may have ogled a few bodybuilder-type guys through my sunglasses at the beach. But Connor had once bragged about 600-lb model Mary Boberry calling him “cute,” albeit too young for her. A love of even bigger women was just part of him.

Oh. So only one of us was googling the cost of an elopement in Montego Bay or apartment listings on the Upper East Side. I see.

This uncomfortable realization highlighted the complicated truths of being the object of this particular fetish. On the one hand, it’s liberating: the old trope of the partner losing attraction after you gain a baby belly or “let yourself go” inherently does not exist with a fetishist. Plus, there’s a certain joy in being seen as beautiful in moments of “imperfection,” like burping and farting. What better way to do so than with someone who thinks burping and farting are hot?

On the other hand, it gives you a new awareness of your body that is hard to shake, even months (or years) after the relationship ends. When I look at myself in a mirror, I sometimes still hear Connor’s voice in my head remarking on my “baby rolls” — new, growing rolls of fat, like love handles. I also can’t let go of a comment he made once, when he said that, at 500 pounds, I’d “waddle even more than [I] already do.”

I didn’t know I waddled.

I visited Connor a few more times after that vacation, but it was a little impossible to recreate the same magic of the original trip since he’d confessed that fantasy. He ended up breaking up with me in early August over a Facebook video call. It was so unceremonious and indirect that I didn’t even realize I had been dumped until weeks later.

I’m left asking myself: How do I reconcile that? How do I redeem my experience of not winning in romance with the notion that Feabie granted to me — that fat girls can and do win in romance?

I’m still figuring that out. But that experience made me realize that my body is not an impediment to love — sometimes, it’s the first step to it.