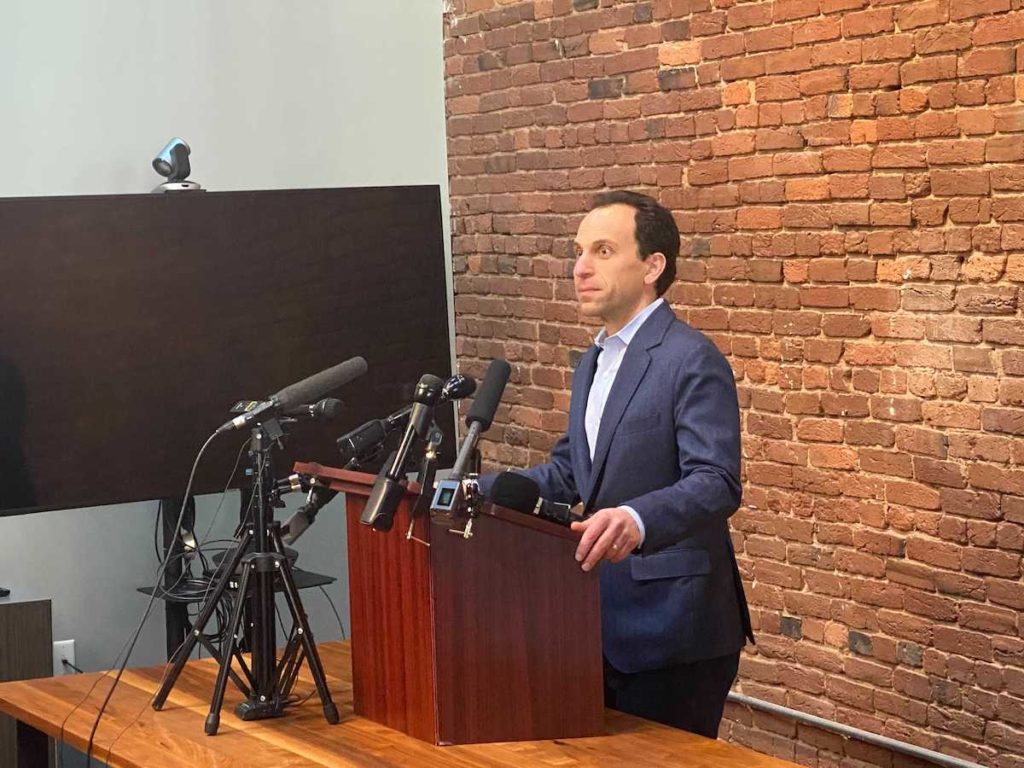 Louisville mayoral candidate Craig Greenberg said on Monday that he was in a meeting with campaign staff when a shooter opened fire.Photo by Josh Wood

Democratic mayoral candidate Craig Greenberg survived an apparent assassination attempt on Monday morning when a man entered his Butchertown campaign office and opened fire. At a 5 p.m. press conference, Greenberg described how that morning, he and four members of his campaign team were in a meeting when the gunman entered the office.

“When we greeted him, he pulled out a gun, aimed directly at me, and began shooting,” said Greenberg.

The mayoral candidate said one of the people in the room was able to get the door shut and that they then barricaded the door. No one was injured, but one bullet grazed Greenberg’s sweater and shirt, he said.

“We are extraordinarily grateful for our safety,” Greenberg told reporters. “We are shaken, but safe.”

Shortly after the shooting took place, Louisville Metro Police Department Chief Erika Shields told the media that a person had been detained by LMPD and that they appeared to be acting alone. Shields said there was not a known motive at the time, but that it seemed that Greenberg had been targeted.

At 10:15 a.m., the LMPD said they responded to the 1200 block of Story Avenue after receiving “reports of an active aggressor.”Greenberg’s campaign office is located at Butchertown Market at 1201 Story Ave. Greenberg’s office is not located on the first floor of the building.

“I don’t know if you’ve ever been to his office, but you just don’t walk off the street and walk into his office,” Metro Council president David James told LEO. “[It’s] complicated to get where his office actually is in the building.”

LMPD closed the stretch of Story Avenue around the Butchertown Market to traffic after the shooting, but later reopened it. Greenberg said he would not comment on the shooter’s motivations while police have an ongoing investigation.

At his press conference, Greenberg appeared emotional while talking about being away from his wife and kids.

He also said the situation is reflective of the rampant gun violence in Louisville.

“Today is not a day for politics, but it’s not lost on me that the violence my staff and I experienced today is far too common in our city,” he said. “Too many Louisville families have experienced the trauma of gun violence. Too many in Louisville were not as blessed as my team and I were today to survive. Clearly, much more work needs to be done to end this senseless gun violence and make Louisville a safer place for everyone.”

On Twitter, Mayor Greg Fischer said he was grateful that no one was injured and thanked the police for a quick response.

I am very saddened by this attack at the offices of Craig Greenberg. I have spoken to Mr. Greenberg and am grateful that no one was injured. I’m thankful to @LMPD and our federal partners for their quick response in clearing the scene and detaining a possible suspect.

Shameka Parrish Wright, another Democratic mayoral candidate, said on Twitter that she was advised by LMPD Deputy Chief Jacquelyn Gwinn-Villaroel after the shooting to update her security protocol. Wright also said she was praying for Greenberg and his family and that she was relieved no one was injured.

“My family & I have seen gun violence over & over:-( Everyone on all sides is impacted. I wish him well. My team & family have been worried about my safety,” she tweeted. “No candidate should have to deal with this. Today we’re focused on making sure everyone from all campaigns is safe.”

The Rev. Timothy Findley Jr., who is also a Democrat running for mayor, said in a tweet that the shooting was “unacceptable.”