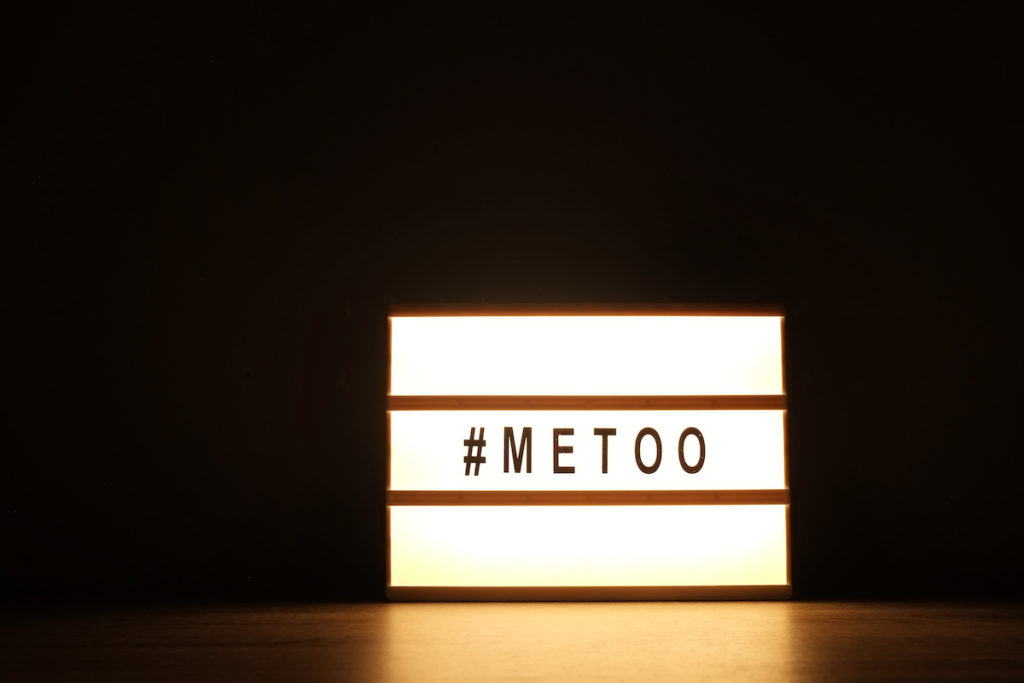 From 2017-2019, no star shined brighter in the social justice sky than #MeToo. Until one day, it didn’t. Adobe Stock

Over the past 11 years, I have worn many hats at Bellarmine University. When I first stepped foot on campus, it was as an admissions counselor, tasked with recruiting the best and brightest to Kentucky’s premier private university. As a graduate student, I learned from world-class professors such as Kyle Barnett and Ruth Wagoner in the communication department. As an alumnus, I’ve served as a mentor to several students interested in the law as a profession through the alumni mentor program: one of the largest in the nation. And back when I was DJ Joe Dubb, I spun records at numerous school dances on the Belle of Louisville and the Muhammad Ali Center.

One role that has eluded me at the School On The Hill, however, has been that of guest lecturer. Since I began my sexual assault prevention work in 2015, I have longed to return to my alma mater to work with the current generation of Knights. Numerous Instagram messages to the school’s Greek organizations and a courtesy meeting with the Dean of Students were unsuccessful in opening this door. Luckily, Bellarmine offers a fantastic stage for those with ideas worth spreading: TEDxBellarmineU.

This year’s installment of TEDxBellarmineU, which I will speak at on Feb. 18, is themed “Now What?” The event webpage provides a description of the program, stating:

“Unprecedented changes have wrought havoc on our world, continually pushing and pulling humanity through challenging situations such as a global pandemic, racial tension, mass shootings, and extreme political division. In spite of these challenges, we must listen to one another and forge onward, seeking answers to quell turmoil with safety, unity, justice, and peace. From a wide range of experience, disciplines, and genres, our selected speakers will share their ideas on what to do now as we move forward.”

With such a robust theme, what better place to discuss the next steps needed to advance sexual assault prevention?

A Movement, Direct Action And Momentum

Finding its origins on the MySpace page of Brooklynite Tarana Burke, the #MeToo Movement was founded in 2006 with the purpose of uniting and empowering the survivors of sexual assault and harassment. Over a decade later, a tweet from actress Alyssa Milano would catapult Burke’s movement viral. #MeToo provided survivors nationwide a platform to share their stories and experiences with sexual misconduct. The movement finally allowed for a long overdue conversation about sexual assault and harassment on a global scale.

But #MeToo was more than just talk. It was about action as celebrity serial abusers such as Bill Cosby, Harvey Weinstein, and R. Kelly finally faced justice for their decades of inflicted abuse. Other celebrities such as Aziz Ansari and Louis C.K. would be “checked” for their questionable behavior. #MeToo even made it to some of the highest offices in the country as we tuned in to hear Dr. Christine Blasey Ford bravely recall her experiences with then Supreme Court hopeful, Brett Kavanaugh. From 2017-2019, no star shined brighter in the social justice sky than #MeToo.

Until one day, it didn’t.

It’s certainly not uncommon for social justice movements to cool off after a period of glowing in the spotlight. The 24-hour-news cycle delivers us stories at a pace that forces us to move to the course before we have a chance to fully digest what is currently on our plate.

Men Need To Step Up

Activist Brenda Tracy famously stated, “There are good men out there, but they’re not speaking up and doing their part.” Thus, if the question regarding #MeToo is “now what,” then the answer is men. Men doing our part is exactly what’s needed to progress the fire sparked in Brooklyn 15 years ago. Men must be willing to indulge in meaningful self-reflection that fearlessly evaluates our beliefs and actions, both past and present. We also must engage in compassionate listening that doesn’t quickly jump to conclusions but that allows us to understand another’s human experience.

Most importantly, men must hold other men accountable. Be it correcting a friend that catcalls a woman walking down the street, or physically interfering when we see an assault in progress, we must intervene. Not being a bad actor yourself is no longer enough. We must take the tone-deaf hashtag of #NotAllMen, and work tirelessly until we can say #NotAnyMan.

TEDxBellarmineU takes place in Bellarmine’s Wyatt Hall on Feb. 18 at 4 p.m. The event is a part of the university’s homecoming week. And for me, it is truly a homecoming as I return to my alma mater not as an employee, alumni or DJ. But as an expert in my field, ready to share my work with the school that has been the foundation of my academic life.