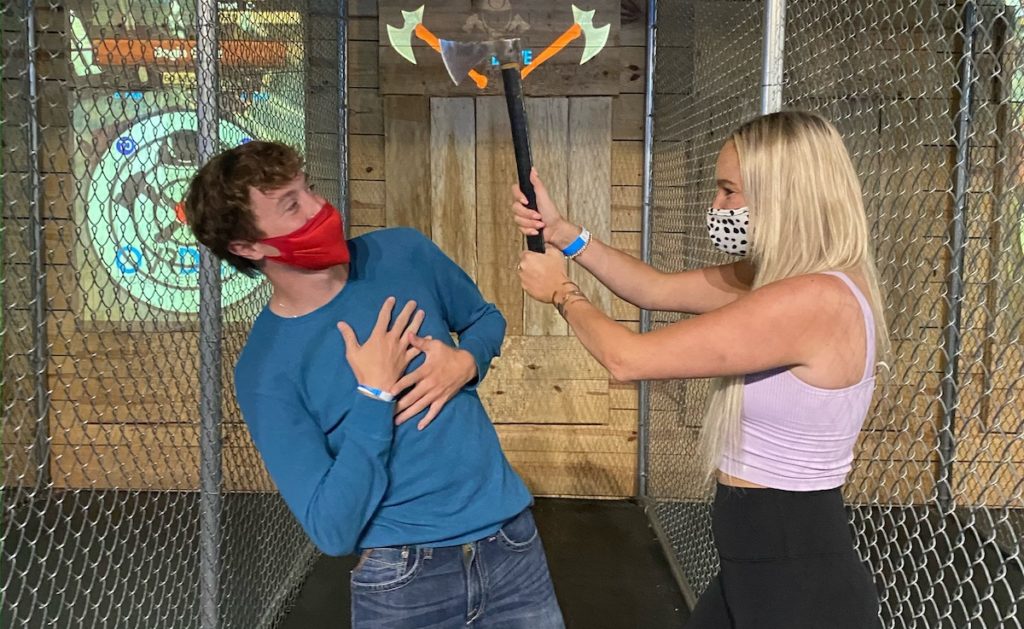 Matthew Wurnig with one of his 50 Dates.Provided photo

Sometimes, it just takes a simple idea to bring a little light to the darkness and some fun to the world. Matthew Wurnig decided during the COVID lockdown to create a TikTok series, 50 Dates 50 States. Initially, because of the pandemic, Wurnig set out to have 50 virtual dates with 50 girls, one in each state. His channel has garnered over 70 million views and 365,000 followers. His instinct was correct, and on March 1, Wurnig will be coming to Louisville for a date.

His date? Jayde Saylor, a sports reporter for WYMT in Hazard, Kentucky.

Wurnig worked as the director of fun for the Bismarck Larks, a baseball club in North Dakota, and while doing what the young folks do, he jumped on Tinder, and when he noticed that he could change his location to any state, he got the idea for his channel. Once he hit 100,000 followers, he left his job and decided to grow his series.

This new season, he’s equipped with a new car, new dates and changing things up. The series will culminate with a winner who will accompany Wurnig on a four-day, all-expenses paid date to Puerto Rico.

Here’s our chat with Wurnig followed by our email exchange with Saylor.

LEO: Why did you start this process?

Matthew Wurnig:  I started “50 Dates 50 States” when quarantine first happened and COVID first hit, and everyone was wondering what it was, and everybody’s locked in and didn’t really know what was going on, and people were kind of scared, and everything started turning virtual. And so I was like, OK what if I tried to go on a virtual date with a girl in every state? And then, from there, I started going on virtual dates, like three or four a night.

I decided to go up the ante and meet them all in person, girls I went on a virtual date with, and after season one where I laid the groundwork, built a following and kind of built a brand, I decided to do it all over again for season two and make it even bigger and better.

Have any of these become long-term relationships or friendships?

Have you picked all the dates for the new season?

You know, I picked the majority of them, but I have the application still open because there’s still some states where we haven’t picked dates for. And so, applications are still open and girls can apply to be a date for their state. Right now we’ve received over 10,000 applications in total, which is pretty wild.

Are you looking for love this season?

I just think I’m more open-minded to it this season, and it’s not going to be as, like last season, it was just more so ‘oh friends’ and, let’s meet people and all that, but I think this one might be more of a serious approach, because I’ll be picking a winner, and me and her will spend four nights together in Puerto Rico. I feel like picking a girl and bringing her there, I’ve got to have some feeling towards her.

Who is your Kentucky date?

Her name is Jayde.

Wurnig’s Kentucky date is Jayde Saylor, a 23 year-old Alabama University graduate and sports reporter for WYMT out of Hazard, Kentucky. Wurnig connected us with Saylor, and we asked her about going on a date with Wurnig.

LEO: What made you apply for the show?

Jayde Saylor: I saw some of Matts TikTok’s from season one and he just seemed like a great guy and a lot of fun. I wanted to get the chance to meet him and have a fun day together.

Was there an interview process after the application?

I filled out the application and Matt dmed me on Instagram to let me know I was picked for Kentucky. There was no further interview process, we just set up a phone call to go over everything.

What do your friends and family think about this?

My friends and family are super excited I’m going on the date. They think it’s such a cute and fun idea, what he’s doing. They aren’t surprised at all that I decided to apply because that’s just the kind of thing I would do. They’re all very excited to hear the details after the date and watch everything related to it.

What do you hope will come from being part of the series?

I just hope for a fun day and a new friendship to come from the date. I think Matt and I hit it off on the phone, so I think good things will come from it. It’s hard to say anything else without actually meeting him in person but I’m super excited for the date and anything that comes from it.