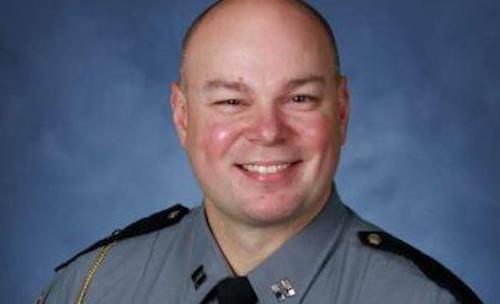 A Kentucky State Trooper who was reassigned for his whereabouts in D.C. on Jan. 6 is suing the department for defamation, saying he was sightseeing that day.

In communications to the press, the KSP said that Captain Michael Webb, who was in charge of KSP recruitment before his reassignment, attended the Jan. 6 rally.

In the lawsuit, which was filed Monday in federal court, Webb said he repeatedly told his commanders that he did not attend the rally.

Although, after leaving D.C. on Jan. 6, Webb did text a superior who had messaged him saying that he hoped Webb was not near the riots. Webb responded, “Negative, we left before the rally ended and didn’t march to the Capital. My daughter went with us, so we went site-seeing at the monuments instead of the march. We are already out of D.C. and headed back. It was a last-minute thing my wife wanted to do, and I couldn’t let her go alone. How did you know I went?”

This text exchange is also contained in the lawsuit.

A lawsuit only represents one side of a story. LEO reached out to KSP for comment on the suit but the department has yet to respond.

The monument is less than a mile from the White House Ellipse, where President Donald Trump held a Stop the Steal rally on Jan. 6.

Webb says in his lawsuit that he and his family didn’t depart from the Washington monument until 12:40 p.m.

Webb’s wife also posted a photo to Facebook on Jan. 6, showing her and her daughter at the Washington Monument, according to the lawsuit. The Kentucky Center for Investigative Reporting has reported that this photo shows Webb’s wife and daughter at the rally, with his wife sporting a Keep America Great Again hat. The post does not mention her husband.

The lawsuit says that Webb and his family went to the Lincoln and Vietnam War Memorial after leaving the Monument and departed D.C. at 2:40 p.m. after Webb received a push notification on his phone from Fox News, notifying him of the riot at the Capitol.

After returning from D.C., Webb was reassigned to the KSP’s Investigations branch while the department investigated him for his whereabouts on Jan. 6. They issued press releases during this time, saying Webb attended the Jan. 6 rally, according to the lawsuit.

On Feb. 24, the lawsuit says that the inquiry into Webb finished, finding no evidence that he had violated KSP standards of conduct.

The lawsuit says that Webb is currently on medical leave, having experienced a nervous breakdown.

It requests damages and a trial by jury.