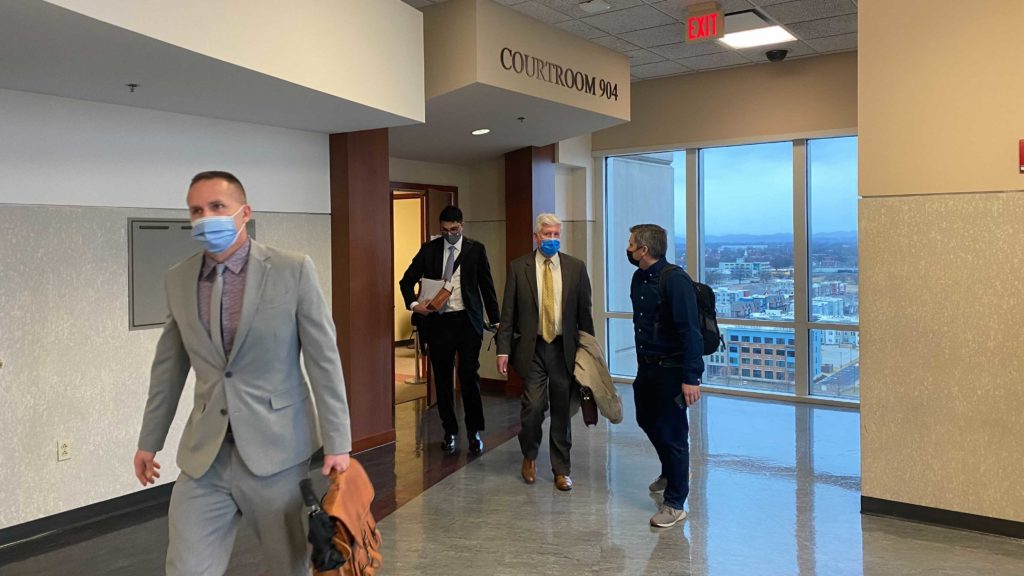 Brett Hankison walks out of the courtroom on Tuesday, Feb. 22 after a jury was selected in his wanton endangerment trial. Photo by Josh Wood

A jury has been seated for the trial of former LMPD Detective Brett Hankison. The trial will begin in earnest tomorrow and is estimated to take up to two weeks.

On Tuesday afternoon, 15 people — 12 jurors and three alternates — were selected for the jury. They come from a pool that was whittled down from 250 potential jurors at the start of the month to 48 who were called to questioning today.

Hankison is charged with three counts of wanton endangerment from shots he fired during the March 13, 2020 LMPD raid that killed Breonna Taylor. His charges are not for her death, but rather for shots he fired that went into a neighboring apartment where three people were present. If convicted, Hankison faces between one and five years in prison on each charge. No officer has been charged for Taylor’s death.

While the first round of juror questioning earlier this month focused on things like how much potential jurors knew about the case and their opinions on the police and 2020’s protests, the bulk of Tuesday’s discussions focused largely on whether potential jurors were able to serve in a potentially long trial, health concerns and whether jurors knew potential law enforcement witnesses.

A jury of 15 people — 12 jurors and three alternates — was finally selected on Tuesday afternoon.

The 15 were selected from a pool of 47 jurors questioned by prosecuting and defense attorneys on Tuesday.

The potential juror whose ex-son-in-law is an LMPD officer who is named in an evidence exhibit and who may be called to testify was dismissed after Judge Smith sustained a motion from the prosecutors.

Judge Smith said that even if the woman’s ex-son-in-law was not called to testify, that he would likely be on her mind while listening to other officers on the witness stand. “I fear that may be somewhat distracting for her,” said Judge Smith.

The woman who indicated that she knew potential witness and LMPD officer Mike Nobles — and would put more weight on his testimony given her positive opinion of him — was also dismissed after a motion by the Commonwealth.

One potential juror, a Black woman, said she could not be sequestered as she had a one-year-old child and no way to take care of the child. She added that her mother worked and that neither she nor her mother had a car.

Judge Smith sustained a motion by the defense to strike that potential juror, saying she was doing so “out of an abundance of caution.”

During the morning panel of potential jurors, only one person said they knew somebody on the list of potential witnesses read off by prosecutor Barbara Whaley. That potential juror has had professional contacts with former police chief Steve Conrad.

In the afternoon session, however, multiple potential jurors said they knew LMPD officers listed by the prosecution.

One potential juror, a white woman, said she knows Mike Nobles — an LMPD officer who prosecutors listed as a potential witness — and was friends with his wife. Asked if she could view him the same as other witnesses, she said she likely could not. “I respect his word, if that makes sense,” she said.

Another potential juror, a white man, said he was a fraternity brother of one of the LMPD officers on the list, but said that would not cloud how he viewed any testimony from that officer versus testimony from other witnesses.

Whaley brought up how one potential juror’s ex-son-in-law was an LMPD officer whose name is included in one of the exhibits entered into evidence and how that officer could potentially be called as a witness.

If he were called to testify, “I wouldn’t want to be here,” said the potential juror. “We don’t speak. It’s not good terms.”

She asked to be dismissed.

A couple of other potential jurors have interacted professionally with people named as witnesses.

Group juror questioning resumed a little before 2 p.m. with 23 potential jurors sworn in. There was supposed to be 24 jurors in the afternoon panel, but, according to Judge Smith, one who the court was waiting for called to say they thought they were meant to report on Wednesday. That juror was dismissed.

During the morning panel, several potential jurors brought up concerns about facing hardships due to the potential length of the trial or potentially being sequestered.

Prosecutor Barbara Whaley worked to alleviate those concerns, indicating that the trial is not expected to go longer than two weeks. Whaley also said that if the jury is sequestered, it would only be during final deliberations and last one night at most.

But Hankison’s attorney, Stew Matthews, told jurors that nobody could predict how long the trial would last or how long they would be sequestered if they were sequestered.

After jurors departed from the morning panel, Judge Smith asked attorneys whether they thought the trial would go longer than two weeks.

“I would certainly hope not,” said Matthews.

During the morning panel, Matthews also indicated that Hankison would be testifying in the trial.

According to a list read by prosecutor Barbara Whaley, many of the potential witnesses who could be called to testify in the trial are current or former LMPD personnel.

Among them is former LMPD Chief Steve Conrad, who was the head of the department when Taylor was killed. Conrad was fired on June 1, 2020 after an LMPD and National Guard response to a curfew violation resulted in the killing of West End BBQ chef David McAtee.

Robert Schroeder, who served as interim chief after Conrad’s firing, may also be called to testify.

At the conclusion of the morning panel of jurors, four were struck and released from service. One of the jurors released had complained about back issues and difficulty walking. One said they would have to work at night in addition to serving on the jury. The other two had limited time they could be excused from work and still receive their pay.

One man who had requested to be dismissed, a high school athletic coach who has an upcoming tournament, was not. Judge Smith said she considered his conflict to be “an extracurricular activity.”

The remaining 20 potential jurors were told they could go home for the day and that they would be contacted either this afternoon or this evening to tell them if they had been selected for the jury.

For a preview of what to expect from the trial, click here.

Matthews asked potential jurors if they would have any physical limitations that would make it hard for them to walk around that location.

Matthews also said that jurors would be shown photos from Taylor’s apartment, including some that may show Taylor’s body. He asked if that would make any potential jurors too “squeamish” or “upset” to participate in the trial.

While much of the questioning during initial round of voir dire focused on things like what potential jurors had heard about the case and their opinions of police and Louisville’s 2020 protests, the focus of Tuesday has largely been on potential logistical concerns like scheduling and health.

Several jurors requested to be excused due to health concerns or scheduling conflicts.

Hankison returned to court on Tuesday wearing a grey suit and blue surgical mask. Ahead of jury selection on Wednesday morning, Judge Ann Bailey Smith agreed to let another officer involved in the raid, former LMPD Sgt. Jonathan Mattingly, invoke his Fifth Amendment rights and avoid testifying in Hankison’s trial. Despite asserting his Fifth Amendment rights, Mattingly has written a book about the raid that killed Taylor that is set to be released next month and has frequently spoken publicly about events that night. Mattingly was shot in the leg by Taylor’s boyfriend, Kenneth Walker, as LMPD breached the door to her apartment during the raid.