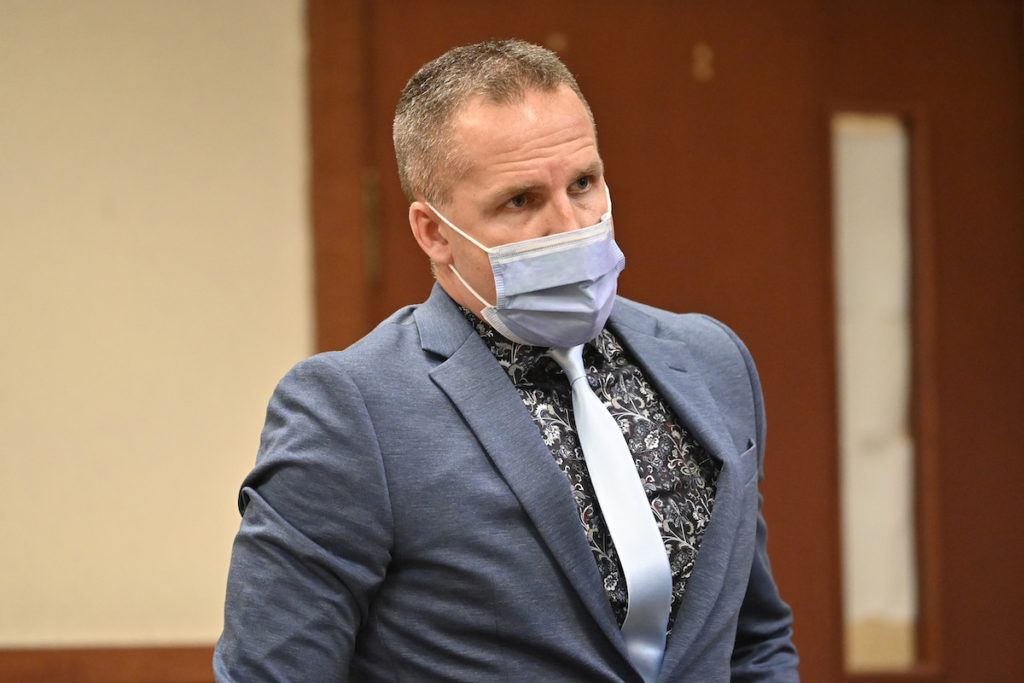 The wanton endangerment trial of former LMPD detective Brett Hankison is not about the police killing of Breonna Taylor, but rather shots Hankison fired that went through Taylor’s living room wall and into a neighboring apartment where a pregnant woman, a child and a man were present.

But Breonna Taylor’s death is inescapable. The jury has heard at length about the warrant secured for her apartment. They have heard accounts over whether or not police knocked and announced their presence at Taylor’s door. Her picture hangs on lampposts visible from the courthouse entrance a block away. Her family sits in the courtroom.

In his opening statement on Wednesday, Hankison’s attorney Stew Matthews, said, “This case is not about the death of Breonna Taylor. But, in fact, it’s totally about that in the sense that that’s what started this whole situation.”

The centrality of Taylor’s death to the trial was on full display on Friday, with prosecutors at times zooming out to look at other aspects of the raid instead of focusing solely on the 10 shots Hankison fired.

Former LMPD Chief Robert Schroeder appeared on the stand for less than a minute to open the day, with prosecutor Eric Finke asking Schroeder if he made a determination regarding Hankison’s employment after reviewing the Public Integrity Unit case on the raid on Taylor’s apartment.

“He was terminated from employment with Louisville Metro,” said Schroeder.

“Thank you chief, I think that’s all the questions I have,” said Finke.

At the end of the day on Thursday, Schroeder was briefly on the stand and asked by Finke what his findings were after reviewing the Public Integrity Unit case file. Hankison’s attorney, Stew Matthews, objected and attorneys were called up to consult with Judge Ann Bailey Smith, who soon dismissed court for the day saying a “legal issue” had come up that would take time to deal with.

In his June 2020 termination letter firing Hankison, Schroder wrote that Hankison’s actions during the raid on Taylor’s 3003 Springfield Drive apartment “displayed an extreme indifference to the value of human life” when he “blindly fired ten rounds” into her home.

Prosecutors then called a detective with Attorney General’s Office’s department of criminal investigation, Herman Hall, to the witness stand. Prosecutor Barbara Whaley’s questions with Hall focused on whether a witness from the day before — Aaron Sarpee, who was in the apartment upstairs from Taylor’s home during the shooting — had told him that he heard police knock and announce before the botched raid.

Hall said Sarpee had told him he had heard them knocking and announcing. An audio recording of Sarpee saying he had heard police announce their presence was also played.

Yesterday, Sapree said he did not hear police announcing their presence as they knocked on Taylor’s door and did not recall making earlier statements that he did to investigators.

The prosecution’s questions then focused on a bullet casing Sarpee had said he had found at the scene when retrieving his car from the parking lot after the shooting. Hall described the casing as a “rifle casing” and said Sarpee had found the casing in landscaping in front of the apartment. While Sarpee testified he found the casing the day after the shooting when he was picking up his vehicle, Hall said Sarpee was not specific about when he found it and said he found it “while he was picking up his daughter one day.” Sarpee testified on Thursday that he was at 3003 Springfield Drive picking up his daughter from her babysitter, who lived in the apartment above Taylor, at the time the raid occurred.

The alleged presence of and firing of a rifle by someone in Taylor’s apartment — which was mentioned by Hankison in his initial interview with Public Integrity Unit investigators — has been a persistent theme brought up by the defense. In that interview, Hankison told investigators he saw a person in a “military-style shooting stance” with a rifle and that he thought his fellow officers were being “executed.”

Hankison’s attorney, Stew Matthews, has argued that the presence of additional firearms or narcotics within Taylor’s apartment was never known because the home was never searched in accordance with the search warrant. However, a Public Integrity Unit investigator who testified Thursday said that his department’s search of the apartment was comprehensive and that no additional weapons or narcotics were found. The only bullets recovered at the scene were fired by pistols belonging to the police and Taylor’s boyfriend, Kenneth Walker, who fired one shot.

In Matthews’ opening statement on Wednesday, he said there was not going to be any dispute about the evidence in the case, but rather the reasoning for why Hankison fired the shots he fired.

“This is not a case of, ‘Hey, we’ve got the wrong guy sitting in here’ or ‘Somebody else did it’ — Brett Hankison is the one that’s charged, he’s the one that fired the shots that are the subject of the case,” said Matthews. “That’s not an issue.”

That, however, did not stop the prosecution from spending much of Friday calling state and federal-level ballistic experts to the witness stand to go over repeatedly how bullets were matched to guns fired by police officers in the incident and how trajectories were tracked.

When one of several ballistics specialists of the day, Bryce Ziegler, an FBI forensic examiner based in Quantico, Virginia, was on the stand, prosecutor Barbara Whaley inquired about rifle round casings turned over as evidence. In addition to the casing found by Sarpee, the attorney general’s office said in 2020 that another was found in Taylor’s sister Ju’Niyah’s bedroom behind a storage chest and was turned over to the state via the family’s attorney.

On the stand, Ziegler said that the two casings were .223 caliber. Such rounds are frequently used in rifles such as the AR-15. He said his analysis had determined that the casings came from bullets that had been fired by the same weapon.

Throughout the trial, investigators have said there was no evidence that a rifle was fired during the raid, and no rifle was recovered from the scene.

Friday saw Breonna Taylor’s sister, Ju’Niyah Palmer, and her mother, Tamika Palmer, return to the courtroom. The two had been kicked out of the trial on Thursday after Tamika wore a jacket emblazoned with Taylor’s name and picture to court.

On Friday, Ju’Niyah was wearing a jacket emblazoned with the logo of Until Freedom, a prominent New York-based social justice group that was active in the protests in Louisville that followed Taylor’s death in 2020.

“He’s just staring at us. He wants to say something but he can’t,” said Ju’Niyah of the sheriff’s deputy in the courtroom.

On Thursday, a staff attorney for Judge Ann Bailey Smith told LEO that “standard dress code” for courtroom spectators was that “no one should wear any attire or display any object that is so inherently prejudicial that it would deprive the defendant of a fair trial.” The attorney, Bob McClure, added that the rule was based on state and U.S. Supreme Court cases and “addresses the concern that any apparel that prominently displays sympathy for either side in a trial may prejudice the jury, or appear to do so, and could result in a mistrial or an appellate court’s reversal of the jury’s ultimate decision.”

Despite the rule and the ejections on Thursday, one man who came to the courtroom on Friday, Bruce Sweeney, was wearing a purple hoodie with the words “Breewayy Warriors” and a picture of Taylor on it.

LEO did not see anyone asked to leave the courtroom during Friday’s morning session.

Speaking to LEO outside the courtroom, Tamika Palmer called the proceedings “bullshit.”

“I think that to just charge them for one family is insane. There’s a total of eight families in that building. In my opinion, you endangered every family in that building,” she said, adding that bullets fired by police during the raid entered the apartment above Taylor’s home yet there were no charges for those rounds.

Asked about what she thought the outcome of the trial might be, Tamika Palmer said, “Finding him guilty is one thing. The problem is the sentencing, right? You can find him guilty, but if you’re still just going to give him a slap on the wrist, what is the point of all this?”

“And it’s still not about getting justice for Breonna,” she added.