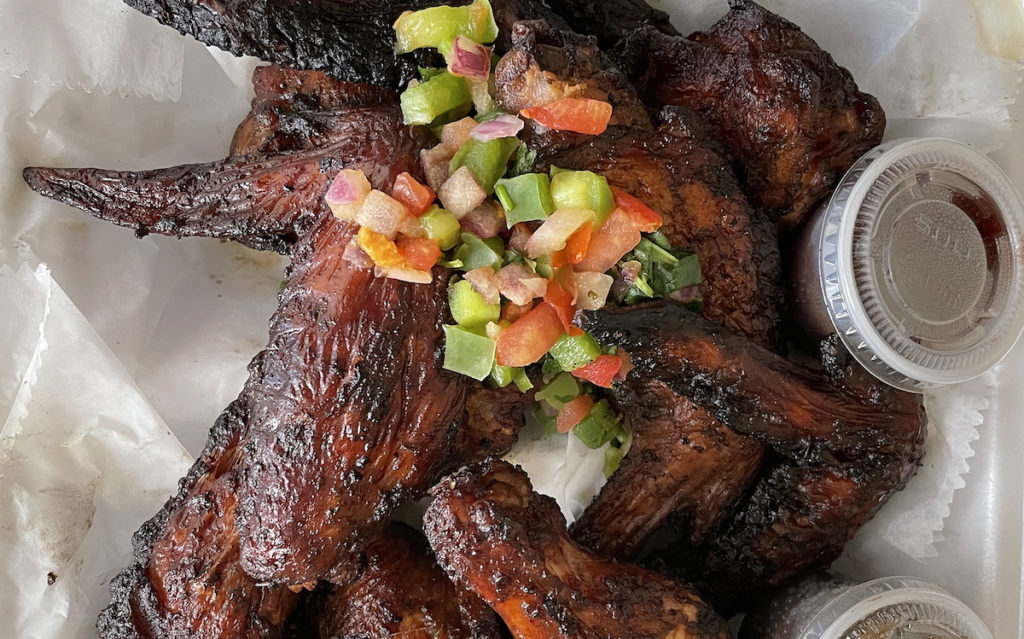 Oversize wings from Eden & Kissi are meaty, charred, and as smoky as a four-alarm fire.Photos by Robin Garr

My friend Erica posted a Facebook challenge: “Y’all…look. This place. These wings. Go. Robin Garr, have you been here yet?” It came with a photo of a succulent golden brown chicken wing the size of a turkey wing, a tantalizing treat from Eden & Kissi.

That was last September, and I really meant to get right out to this little takeout spot in Buechel. But one thing after another got in the way. So here we are, four and a half months later, and suddenly, with the omicron variant hanging around, great Jamaican takeout sounded good.

I skimmed the menu – not as easy a task as you might think, but I’ll get to that – phoned in our order, and headed for Buechel. A friendly woman handed over a giant bag of goodies still sizzling from the grill out back, and away we went. We got wings, of course, and I’ve got to tell you that Erica was right. I fought the wing and the wing won. In a very good way.

We got a bunch of other Jamaican goodies too — or as Eden & Kissi’s Facebook page explains it, “a fusion of Afro-Caribbean food with a French touch — and it was all good, just as praiseworthy as those meaty, smoky wings.

Eden & Kissi has a Facebook page but no website, Twitter or Instagram. They post the day’s menu with photos around 2 p.m. every day. But these posts don’t show prices. GrubHub and DoorDash have menus with prices, but they don’t always fully agree on content or price, and I prefer to give my money directly to the restaurant anyway.

Should I have asked when I called in my order? Yeah, I might have learned in advance that our extra-large meal was going to fall a bit above the “cheap eats” range, especially with a comparatively grilled pompano on the menu. But hey,  the food was delicious and the price was fair for what we got.

Let’s look at the details. The daily menu always begins with a special, which may include such delights as taco Tuesday (with Jamaican fillings), oxtails, salmon and potatoes, Jamaican jerk chicken or beef patties, curry goat stew and more.

The wings were huge, charred dark brown with black spots, and had lots of meat. We chose the smoky option and got a blast of char and smoke before biting through the crisp skin to reveal perfectly cooked tender but not dry meat.

The pompano was left whole, round and flat — big enough to fill the box; skin, tail and head were left on. The grill imparted a smoky flavor similar to that on the wings. It was charred all over and extremely crisp. The flesh was perfectly done, completely cooked, flaky, not dry. Be aware, it was full of bones — you get that with a whole fish.

It was perched atop a portion of mixed greens, collards and perhaps other greens, which had been finely chopped and long cooked. A delivery menu calls it meatless, and we didn’t spot any meat bits or flavor.

A “loaded” jerk veggie pita was beautifully plated, which was impressive in a clamshell box. A pita was laid flat and topped with lettuce leaves, white rice, pretty yellow rice, a ration of black beans and finely diced, colorful veggies. It was surrounded by fried plantains and boasted an overall gentle whiff of Jamaican jerk spices.

All three dishes came garnished with a pretty, multicolor brunoise — neat tiny dice — of carrots, celery, green and red pepper, and onion with a refreshing whiff of tart vinegar or citrus marinade. This attractive, precise treatment may reflect the French touch in Eden & Kissi’s cuisine. All the rest seemed pure Afro-Caribbean, and that’s fine with me.

A bottled hibiscus drink —  “a healthy juice and tea for people’s wellness,” the Facebook page asserts — was impressive. It’s bright reddish purple, with a haunting floral fruity scent that reminded me of pomegranate or cranberry. It was very sweet but plenty tart to keep the sugar in balance.

A hearty lunch that could have fed three or four totaled $51.91, plus a 25% tip. A more standard two-plate lunch, without the relatively pricey fish, would have been around $25 plus tip.