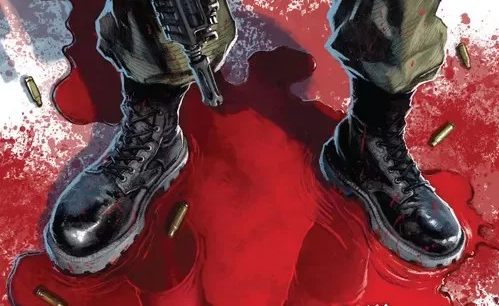 The latest Peacemaker comic does not give off Deadpool vibes, but we're looking forward to see where the story goes.

Written Garth Ennis
Art by Garry Brown
Review by Krystal Moore
Christopher Smith is being considered for a new job. His old one involves being part of Delta Force, special ops, all that sort of thing. In a military cemetery, he meets with the woman who’s been assigned to evaluate his psychological profile to see if he’d be a good fit for this super secret new team. He launches into his life story and from the beginning, it’s quite tragic, starting with the murder/suicide of his parents and siblings. From one family to the next Christopher ends up alone.  Eventually, he finds the military where he excels and begins his transformation into the Peacemaker as he moves from one successful project to the next.

If you saw the last Suicide Squad movie, you’ll be familiar with the character played by John Cena.  In this telling of his story, we find that much of the tragedy around him was actually brought about by himself.  When we learn how and why he took on the Peacemaker name, it’s really quite chilling.  I’m curious to see if this book follows the movie and TV show and becomes comedic.  I was expecting something along the lines of Deadpool, but so far, not so much.  I should have known better since it was written by Garth Ennis.  I’m looking forward to issue No. 2 to see where this story and character are going in the Black Label DC book.

Written by Brian K Vaughan
Art by Fiona Staples
Review by Felix Whetsel
Saga is BACK, baby! After a three-and-a-half-year hiatus, the dream team of Fiona Staples and Brian K. Vaughan has returned and the story of Hazel and her family is back on the stands.

(Note: This will include spoilers for the first fifty-four issues, so if you’ve forgotten or aren’t caught up, tread carefully! For those with the memory of a goldfish like myself, there is a very handy recap of everything pre-hiatus over on Polygon.com)

With the death of her father, 10-year-old Hazel is left being raised by her mother and her mother’s new business partner. While the grief of losing a parent has certainly hardened Hazel, she hasn’t lost her playful charm or her ability to get in trouble. The same goes for Alana — though changed by time and circumstances, she’s still the sharp, funny, and snarky Alana that we got to know in the first half of the story. She’s simply doing her best raising not only her daughter, but also Squire, the orphaned son of Sir Robot.

This issue also features the return of the Will, with Marko’s horned-skull in hand. The disgraced mercenary is one step closer to saving his name — and Gwendolyn has plans for him.

Needless to say, there’s a lot of ground covered in this double issue. There’s no recap, but despite hardly remembering the first nine arcs I didn’t feel lost jumping in head first. Opening the first page to Hazel already in trouble and on the run felt like sitting down with a familiar face.