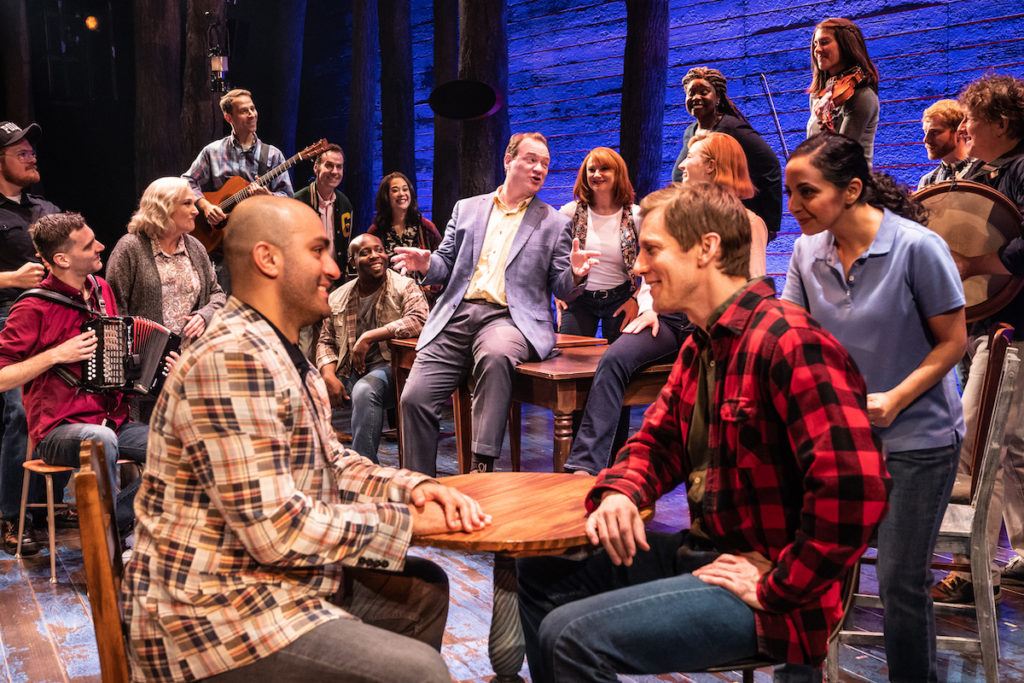 The North American Tour of 'Come From Away.' Photo Credit: Matthew Murphy.

“Come From Away” tells the true story of how the small town of Gander, Newfoundland took in 7,000 stranded airline passengers during the aftermath of Sept. 11, 2001.

“David and Irene [the show’s creators] call it a 9/12 story because it’s what happens after 9/11, after how the kindness and compassion of the Newfoundlanders helped all the people who ‘came from away,’ helped heal them,” says Christine Toy Johnson, one of the principal actors on the tour, performing as Diane. “I feel very strongly that we need this story of intentional generosity and kindness right now.”

Sometimes these stories need to be seen in order to know that they are possible. As one of the show’s characters says, “I don’t think that would happen back home… but it happened here.”

Johnson grew up in the suburbs of New York City and has either been a performer or training to be one her entire life. She also has worn several administrative hats, acting as chair for Actors’ Equity’s equal employment committee as well as treasurer for the Dramatists’ Guild — a union for playwrights and musical librettists.

“I’m very aware of the challenges facing an Asian American person in this business, so I’ve always been very active as an advocate for diversity inclusion and activism in our industry,” says Johnson. “It’s an extraordinary group of people [in the cast and crew.] I also know that they purposefully put together people that they feel can really embody the values of the story.”

Those values include the virtues of acute compassion in extreme situations that are certainly inspiring on their own but even more relevant in a divisive society that is still in the midst of a global pandemic. The themes of a good piece of theater remain malleable, interacting with society’s ever-changing context. One strong example of that comes toward the beginning of the show, a moment that depicts the passengers and their sense of isolation and disconnectedness from the world while forced to remain aboard their respective planes while authorities figure out what to do with them.

Another — that will not be spoiled in so much detail — comes near the show’s end. So much of “Come From Away” is uplifting, so it is a welcome additional color to the story when the show takes the time to address the changed reality many Muslim people faced after Sep. 11, even if it is brief.

“I think you’re right on target… I think that’s very intentional on [the creators’ part], that there is… the story is not about that part of what happened, but you cannot ignore it. It is a very big part of it,” agrees Johnson.

The events that the creators of “Come From Away” adapted also lend themselves well to its mass appeal. Many, if not all, of the characters are based on real people from every corner of the world. A cisgender, gay couple are some of the show’s main characters, a man accustomed to prejudice and suspicion over his skin color is met with welcome at every turn when tasked with an unusual assignment, an Orthodox Jew organizes a kitchen that also feeds vegans and members of other religions with dietary restrictions, and there is a moment of beautiful ingenuity when a group of Christians use the numerical system of the Bible to find verses and communicate with each other across language barriers.

It has been more than 20 years since Sept. 11. Culturally, society is in an interesting period where these events still affect the living world and people have direct experiences with the day but also where there is a new generation of young people who were not alive for it. Part of a show’s social responsibility, especially one that deals with historical events such as “Come From Away,” is to educate and bring that history to life.

Johnson agrees: “For me, a really good piece of theater might not answer all of the questions, but it certainly raises them… It gives us this alternative lens to look through at [Sept. 11]. Not that we shouldn’t know the horrible aspects of it because we absolutely must, but… the divisiveness that’s been happening over the last several years. I feel like there’s such a big need for us to come together in unity and shared purpose. To coexist more than peacefully but also harmoniously.”

Indeed, as one of the more enduring lines in the show says, “Tonight we honor what was lost, but we also commemorate what we found.”

“Come From Away” opens on Tuesday, Feb. 15 as part of PNC Broadway in Louisville’s 2021-2022 season at The Kentucky Center and runs until February 20. To learn more and purchase tickets, please click here.