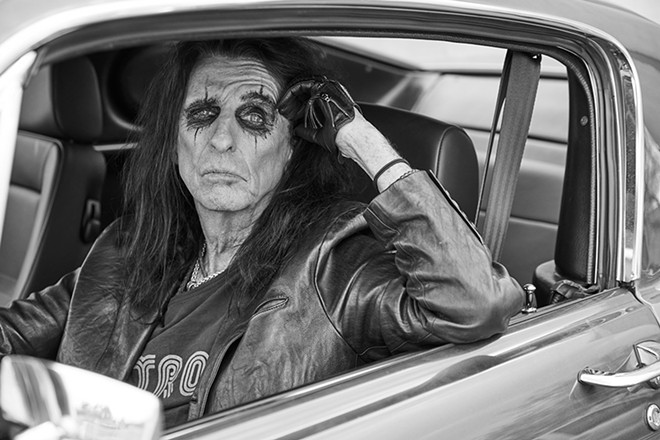 Every aspect of an Alice Cooper tour is planned with an almost hypercritical sense of deliberation. Take a look at the poster for Cooper’s current tour, a continuation of last fall’s run of 25 East Coast dates; there’s no given title to the tour — the only words, beyond Louisville’s Feb. 3 stop and other upcoming dates, are Cooper’s name and “Detroit Muscle,” located on the illustrated vanity license plate on the front bumper of a tricked-out Mustang.

When addressing the question of whether or not Detroit Muscle is indeed the tour’s official designation, Cooper notes that the phrase is merely an identifier for the Motor City’s innate strength (“The plate is the fact that, in Detroit, it’s all about muscle cars and muscle music, so it’s making the statement that it’s all about Hard Rock,” he says). Then he reveals the cookie within the poster’s design.

“That’s my Mustang,” Cooper said of the grill illustration directly under his name. “I’ve got a ’68 Bullitt Mustang that I had built, and it looks exactly like the one in the (Steve McQueen) movie (Bullitt). I even toyed with the idea of putting bullet holes in it. A 600 HP Coyote engine in it. It’s a beast.”

Just like the car’s owner, Cooper’s reputation for wildly inventive and exhaustively athletic stage shows is the stuff of legend, but the pandemic forced the Vincent Price of Rock & Roll to mothball his touring activities.

“We did 25 cities down the East Coast last fall, but before that we had 18 months off,” Cooper says. “We’re used to doing 200 shows a year, and having 18 months off, we were going insane.”

The current jaunt ostensibly promotes last year’s brilliant Detroit Stories album, but is actually a showcase for some of the best songs of Cooper’s long, illustrious career.

The album shocked even Cooper himself when it debuted at No. 1 on Billboard‘s Top Album Sales chart. It also cracked the top 50 of the overall Billboard 200 chart as well as the top 10 of the industry bible’s Hard Rock Albums, Top Rock Albums and Independent Albums charts.

“We wanted to do a Hard Rock album, but we couldn’t do that in Nashville or L.A. or New York. We had to do it in Detroit,” Cooper says. “Once we got there, it started taking on a different personality. When I get with (producer) Bob Ezrin and the idea is good, generally the album shows up and it does really well.”

“Detroit Stories had an impact because there’s history there,” Cooper continues. “Somebody reminded us that it was the 50th anniversary of Love It to Death, which was our first hit record which we did in Detroit. It was a total coincidence but something drew us back there. Maybe there was some kind of synchronicity.”

As usual, Cooper’s road spectacle has a lot of moving parts requiring Herculean efforts by an enormous crew, a tricky proposition in the third year of the COVID-19 pandemic. Like everything else in his life, Cooper is more than prepared for the task at hand.

“We’ve got 53 people on the road, we got tested every night, everybody was triple vaxxed, and not one person got sick,” Cooper says. “We kept a bubble but not a tight bubble. We didn’t have any VIPs backstage, but we were off playing golf in the morning, we went to malls and went to movies. It just goes to show, if you’re triple vaxxed, you’re not letting much in.”

As noted, this tour tangentially coincides with 2021’s Detroit Stories, but the current live set list only offers up a couple of songs from Cooper’s most recent album. After 50-plus years and 28 band and solo albums — he’s currently at work on two more, “to make it an even 30” — assembling a set and a running order that will please every fan is nearly impossible.

“It’s the hardest thing in the world. It’s the same for the Who or the Rolling Stones or anyone who’s been around for 50 years,” Cooper says. “All of our records are the soundtrack to somebody’s life. I hear a Stones song and go, ‘Oh, I know what car I had.’ But I’m not really thinking, ‘Well, Alice, you’ve been around that long. People will want to hear something from Easy Action.’ We can’t go that far back, but we do try to find good stage songs that fit this show.”

“This show has a storyline in it, so I have to go, ‘What’s a good stage hook?’ A song like ‘Generation Landslide’ is a great record, with a great lyric, but we’ve tried it onstage and audiences don’t react to it. They give it a nice polite clap. But a song like ‘Feed My Frankenstein,’ that’s a stage song,” Cooper adds.

Cooper admits that the majority of the current show is determined by a natural fear of fans storming the tour bus with torches and pitchforks.

“Out of the 25 songs we do, 18 to 20 of them are must-dos or the audience will get pissed off,” he says. “If we leave without ‘Under My Wheels’ or ‘Poison,’ we’ll get killed. We only have about five we can play with there. We fit in a couple from the new album, and there are theatrical bits where I go, you know, ‘Roses on White Lace’ would be exactly right to get from A to B here,’ so we put that in. But then every e-mail is, ‘I can’t believe you didn’t play…’ I have to go for pleasing 80% of everybody.”

Cooper doesn’t give much away about the new show beyond the fact that “there’s the Alice Cooper castle, and anything can and does happen in that castle; it starts out Rock & Roll, then gets more theatrical then finally goes into insanity.”

He’s quick to credit his touring band with the intensity and energy of the show: guitarists Tommy Henriksen, Ryan Roxie (“He’s a Rock & Roll, Jimmy Page-type guitarist”) and Nita Strauss (“She looks like a Victoria’s Secret model and plays like Eddie Van Halen…she’s a shredder”); drummer Glen Sobel (“Almost every drummer in any band out there, he was their teacher”); and bassist Chuck Garric, as well as Cooper’s wife Sheryl Goddard, are all incredible in his estimation.

“I’d put this band up against anybody,” Cooper says with obvious pride. “They’re all amazing.”

Cooper knows what kind of lowered expectation there might be surrounding a Rock god in the twilight of his career (“’Ooh, he’s 74; this is the slowed-down version, he’ll be walking through it…’”), but he’s maintained a workout regimen that includes a two-mile run every night, hearkening back to his high school and college track days. He and Goddard both had and beat COVID in the pre-vaccine days of the pandemic, and he’s barely lost a step after his six-decade Rock & Roll Hall of Fame career (a chance mention of Special Forces guitarist Mike Pinera reveals Cooper is also enshrined in the International Knife Throwers Hall of Fame).

So what should one expect of the de facto Detroit Muscle tour?

That was, and will always be, Alice Cooper — Rock’s first and best villain, still guillotining, or something close to it, after all these years.

Alice Cooper is set to perform at the Louisville Palace on Thursday, Feb. 3. The show starts at 8 p.m. and tickets start at $35. To buy tickets, click here.

This story originally appeared in LEO’s sister publication, City Beat. For more stories from them, visit their website.