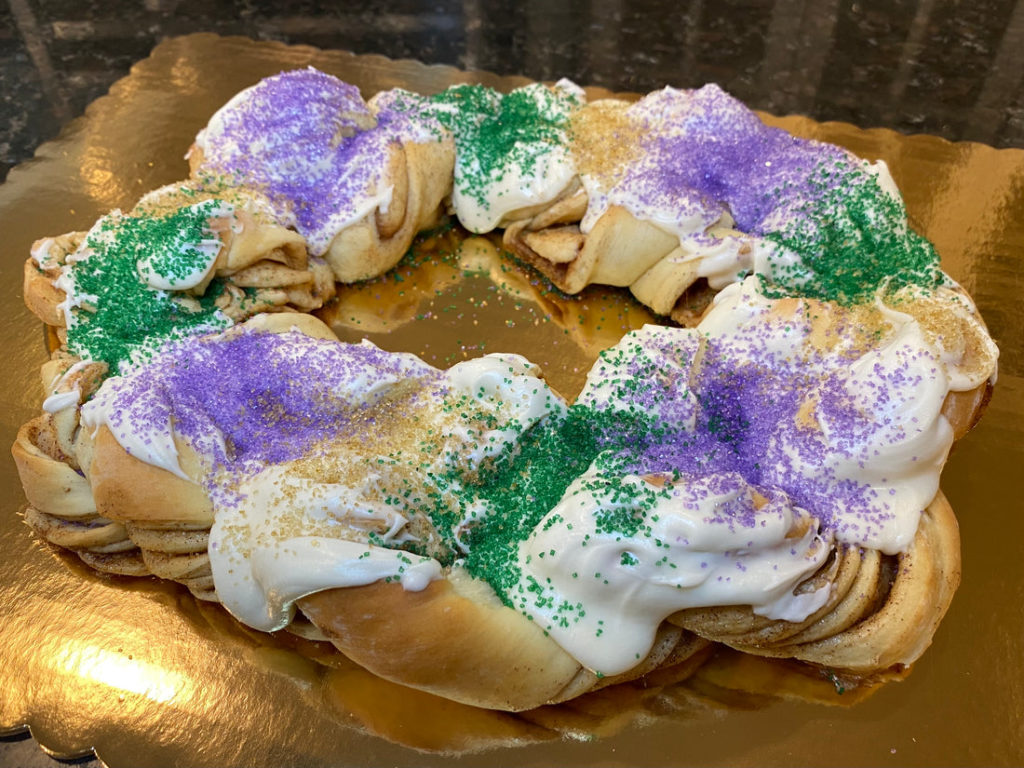 With the arrival of Mardi Gras next Tuesday, March 1, comes the resurgence of king cakes, the traditional New Orleanian cinnamon roll-esque pastry decked out in purple, green and gold sprinkles and/or beads. Part of the king cake tradition also includes hiding a miniature figure of a baby, meant to represent the infant Jesus, inside the dish.

We’ve rounded up this list of some of the bakers and venues in Louisville who are selling king cakes — and items inspired by them.

Note: most of these, as indicated below, have to be ordered in advance, and premade king cakes tend to go quickly. Call a venue to check availability.

Heitzman Traditional Bakery and Deli
9426 Shelbyville Road | https://heitzmanbakery.com/ | 502-426-7736
This family-favorite bakery’s king cakes tend to go quickly, so make sure you pick up yours while supplies last.

Small Batch Craft Bakery
8308 Croydon Circle | smallbatchlouisville.com/products/new-orleans-king-cake | 502-889-1131
Native New Orleanian Lee Kresovsky makes these king cakes in honor of her hometown. They’re $25 each and available for pickup through March 1; order at the link above.

Wiltshire Pantry
1310 East Breckinridge Street | wiltshirepantry.com/shop/product-category/holiday/ | (502) 581-8560
You’ve only got until 5 p.m. on Thursday, Feb. 24 to place your order for one of Wiltshire Pantry’s king cakes, which you have to pick up at the address listed above. Their King Cake with Cream Cheese Filling & Vanilla Icing option costs $35; the Braided King Cake with Bourbon Praline Filling and Caramel Icing is $45.

Williams Bakery
1051 N Clark Blvd, Clarksville | facebook.com/WilliamsBakery | (812) 284-2867
Also across the river is this “old-fashioned” bakery in Clarksville, whose king cakes go for $35. They’ve got glazed donuts decorated in Mardi Gras colors, too.

Hi-Five Doughnuts
1011 E Main St | hifivedoughnuts.com | (502) 409-5584
Speaking of donuts: Hi-Five is once again offering their jumbo king cake donuts (not traditional king cakes, to be clear) for $25. (Call ahead to place your order.) If those aren’t your thing, they’ve also got regular donuts covered in purple, green and gold sprinkles.

Hi-Wire Brewing Louisville
642 Baxter Avenue | hiwirebrewing.com/louisville | (502) 717-4500
Last but not least is this also-not-a-literal-king-cake “King Cake,” which is actually a seasonal stout from Hi-Wire Brewing. They’ll be re-releasing it at a party at their taproom this Saturday, Feb. 26, from 2 p.m. to 6 p.m. The drink contains “coffee, chocolate, vanilla, lactose, cinnamon & pecans,” and they’ll continue the “baby” tradition with a sticker hidden on some of their 4-packs.