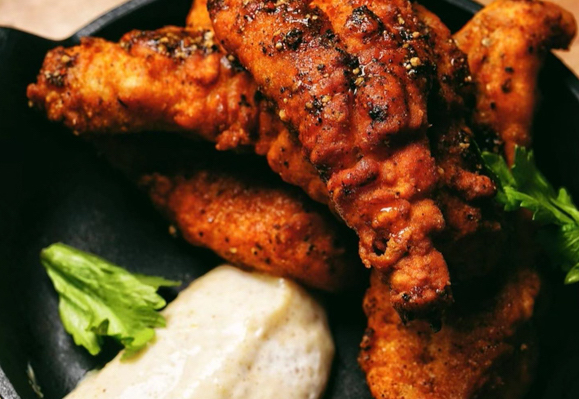 Late last year, the owners went on a culinary tour of Southern cities, including New Orleans, Nashville, and Oxford, MS, which provided them with inspiration for their menu.

The name “North of Bourbon” refers, in part, to Bourbon Street, one of the most famous areas of New Orleans.

However, Chef Lawrence Weeks, one of the co-owners, told LEO that the team doesn’t want to showcase only New Orleans cuisine on their menu; rather, they “want to spotlight some of the things that people don’t commonly think about when they think about the South.”

He listed the numerous ethnic groups who have made their influence on the food landscape of the South: “a Mexican population; that’s why you get the Mississippi Delta tamales,” “the Chinese population, where you get dishes like yaka mein,” “the Vietnamese population that originally went down in Louisiana for shrimp fishing,” and “a Sicilian population — that’s why we have pasta on the menu.”

“We don’t want to put ourselves in a box, where we’re going into it pigeonholing ourselves,” said Weeks. “I think that the trip really was to open our eyes up and educate us so that we can better educate the guests on what the true South actually is.”

Relatedly, Brad Jennings, another co-owner, told LEO that it’s continuously important for the team to establish strong connections in the city. All of the draft beers that North of Bourbon serves are local –– except one, which comes from Louisiana. The restaurant gets its dry-aged beef from a farm in Princeton, Kentucky, and its coffee comes from Bean, right down the street.

“It’s really important for us to stay in the community,” said Jennings, “as much as possible [and] get to know the folks in the area. That’s something that I’ve always enjoyed as far as being in the service industry, and it goes from meeting people so they come in on a regular basis every other Tuesday to really becoming friends and family and getting to know folks and become part of their life.”

The bar had its grand opening event on New Year’s Eve, which Jennings and Weeks both agreed was successful. Jennings said that a lot of people were “surprised” by the restaurant –– pleasantly surprised, that is.

“Otherwise, we would have thrown them out,” he joked.

North of Bourbon is located at 935 Goss Ave. and replaces what used to be Mr. Lee’s Lounge. It’s closed on Sundays and Mondays, but it’s open from Tuesday through Thursday from 11 a.m. to midnight and Friday and Saturday from 11 a.m. to 1 a.m.

The other co-owners of the restaurant are Eric Jennings, Brad’s brother, and Stacy and Daniel Holyfield.