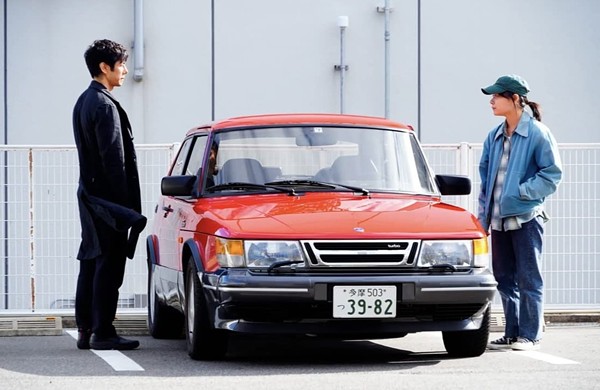 A scene from "Drive My Car."

Digressive, literary, expansive in feeling, narrow in scope: with hardly a plot to burden it, “Drive My Car” is the filmed work this year that best offers up the pleasures of psychological-realist literature. Hardly the only form of fiction writing, this space is a genre as much as any — with clichés and received expectations of its own. Centering the existential and emotional concerns of an artist in middle age, privileging one man’s interiority while offering a broader vision of the world, the film manages to work in a space in which many have aspired to success and failed. In adapting and expanding a short Haruki Murakami story with a profound sense of freedom, Ryusuke Hamaguchi’s demonstrated with this and his other considerable works released this past year that there’s little he couldn’t capture about the life of the mind.

With each of Hamaguchi’s recent works as a director, he’s sampled from a different palette. Less a multi-instrumentalist of genres as traditionally understood than a master manager symphonic array of tones and registers applied mostly to a subjective form of realist filmmaking, Hamaguchi’s style feels both distinct and reliably authoritative from film to film. “Drive My Car”’s opened following his scripting credit for Kiyoshi Kurosawa’s wryly Hitchcockian period thriller “Wife of a Spy,” as well as his direction and writing of the nearly ethereal, considerably lighter anthology “Wheel of Fortune and Fantasy” — itself coming after the brimming melodramatic romance of “Asako I & II.” In each, Hamaguchi manages to get at the existential realities of day-to-day life with a touch that’s never belabored, stemming naturally from the rich psychology of his characters. Whether capturing the seasoned, embittered outward gaze of a middle-aged lead, the hopes and ecstasies of an idealistic twenty-something, or the whiplash between trust and need that fuels a charged thriller, Hamaguchi’s malleable approach to form allows him to deliver works that feel both psychologically circumspect and shot through with the visions of his principle characters.

In “Drive My Car,” our lead is an actor and theater director Yūsuke Kafuku (Hidetoshi Nishijima) best-known for his guiding and starring roles in Anton Chekhov adaptations. Married to Oto (Reika Kirishima), a screenwriter whose artistic inspirations come at the most charged moments between them, he finds the terrain his experience and marriage have long rested on to be shifting underneath him. Now approaching middle age, his relationship has both evolved in ways that beguile and yet retain a certain spark: some elusive aspect that, as an artist, he works continually to get a grip on the place of in his life and process.

“The text is questioning you,” he tells a performer later of Chekhov’s work on “Uncle Vanya,” a personal standby he works to put on for much of the film as part of a residency with the Hiroshima theater festival. But being drawn to work with such material doesn’t always mean he’s up for answering to it, and “Drive My Car” largely orbits around such experiences of a life artistically and otherwise haunted. Over the course of this revived production, Yūsuke’s forced to accept the services of an exceptional professional driver named Misaki Watari (Tôko Miura) — and rehearses on long commutes in his own Saab for the title role in dialogue with Oto’s recordings of the play. This time is different, however; for the first time staging “Vanya,” he’s helming a production he’s declined to star in, altering his relationship to both this day-to-day routine and his own artistic work.

In choosing “Uncle Vanya” as a centerpiece, Hamaguchi makes the ability of art to speak across time, language, and personal ability one of “Drive”’s central themes. For Chekhov puts to words the agonies Drive’s characters cannot, and Yūsuke’s relationship to the material, the mysteries contained within it, and the people which do or don’t surround him with each restaging leave him struggling under the work’s transfixing weight.

This process isn’t all interior or hermetic, though (even as Nishijima’s severe performance renders these quiet processes beautifully). Theater, like film, is a work most often done collaboratively, and “Drive My Car” draws out its feelings through the processes of casting, rehearsal, and less professionalized social meetings. Yūsuke’s production is strongly multilingual, drawing the talents of actors from around the globe, speaking and signing in a range of modes. Over its production, he all but barks directions at performers, struggling as a director to bridge the gulf between their respective interiorities and the artistic vision proffered by his own wounded, emotionally repressed self. This aspect draws the attempts to communicate — and to do so in the wake of the film’s sparse but scarring emotional ruptures — into sharp relief. Over “Drive”’s course, Nishijima is doing what all film- and theater-makers must do in delivering on a vision; he’s trying to communicate from the depths of his relationship to the material, a well sprung from the materials of his own life.

This would seem muddled and abstract if Hamaguchi and his collaborators weren’t so certain — and really, so exceptional — in their formal work. In shooting and editing, they channel the decisive rigor of the film’s lead, delivering each scene with an air of honed but evocative precision. In laying out the materials so clearly — and not shying from underlining some of the film’s thematic and psychological aspects — Hamaguchi’s made a work that’s both invitingly universal and richly high-minded, addressing (as “Vanya”’s suggested to do) a range of widely felt existential and emotional conditions. Thanks to this sharpened but unobtrusive approach to form, it’s easy to relax into the film as a viewer — and to trust in the hope that it’s going somewhere — given the sense of constant surety that its collaborators know what they’re doing. Over its three-hour course, the ingredients that make up “Drive My Car” thicken, bubble, and intermingle in the way you’d cross your fingers hoping for when putting on a stew. Rhymes and connections arise with a seemingly organic quality that’s nonetheless a product of exceptional control, given the way each emerges with seeming casualness and at its proper time.

This is all massaged into (as the big events of most lives are) a disarming, and potentially numbing, structure of daily commutes, work, and routine: situating the immediate eddies and disorienting whirls of feeling characters experience within the more ambient movements of life in time. This takes place most of all in the film’s crucial driving scenes, in which Yūsuke gives up some sense of control as a passenger and left to ruminate on the relationship between his production, himself, and his cast. Most everything on screen is filtered, quietly or aloud, through this experiential space of quiet deliberation, which Hamaguchi never ceases to render well. While “Drive My Car”’s incremental progression centers largely on Yūsuke’s life, what elevates it is an abiding sense of emotional intelligence and formal precision, along with this broader artistic vision: the clear sense that everyone within it has a full inner life and history, and thus a great deal to give.