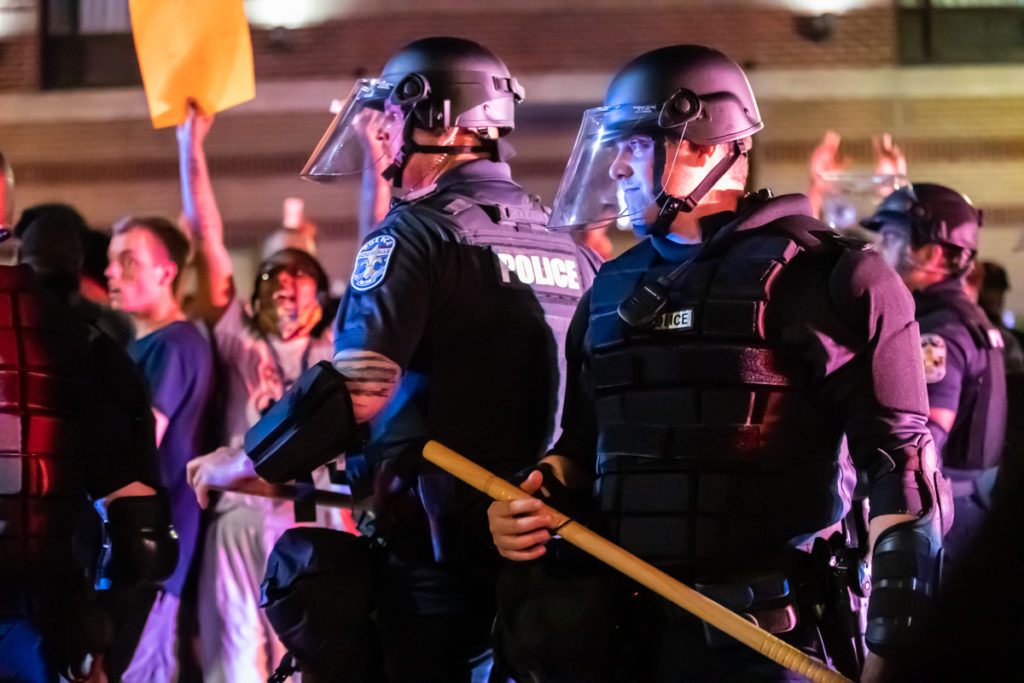 LMPD during the 2022 Breonna Taylor protests.Photo by Kathryn Harrington

Kentucky state Sen. Danny Carroll (R-Benton) is again trying to push through a bill that would enhance penalties for offenses committed during “riots,” as well as criminalize insulting police officers and provide legal protection for defensive lethal force to be used in certain circumstances during a “riot.”

This year’s bill, which was introduced on Wednesday, is nearly identical to the amended, final version of a bill Carroll filed in last year’s session that passed the Senate in March but was not considered in the House.

Carroll, a former police officer, said last year that the bill was meant to “send a clear message to those outside our commonwealth” who want to “destroy our cities,” adding that peaceful protests in Louisville over the killing of Breonna Taylor had been hijacked and turned violent by outside actors.

Critics of the bill maintained that it was designed to stifle free speech and punish protesters. Speaking on the Senate floor ahead of the March 11 vote last year, Sen. Gerald Neal (D-Louisville), whose district includes Louisville’s West End, railed against the bill, saying, “This is beneath this body. It’s unwise. It’s provocative. It’s unnecessary. It’s unreasonable. How dare you?”

Under the bill, a person who “accosts, insults, taunts, or challenges” an officer “using abusive, indecent, profane or vulgar language” while within six feet of said officer could be charged with second degree disorderly conduct.

The bill would also see any person charged with an offense during a riot held in jail for at least 48 hours and held in custody until they appear before a judge.

Under Kentucky law, a riot is defined as a public disturbance by a group of five or more people “which by tumultuous and violent conduct creates grave danger of damage or injury to property or persons or substantially obstructs law enforcement or other government function.”

In the bill, obstructing a highway — a charge that was frequently received by protesters arrested in Louisville during 2020’s protests — would be elevated from a Class B misdemeanor to a Class D felony, punishable by up to five years in prison if it occurred during a riot.

Resisting arrest, which is a Class A misdemeanor, would also become a Class D felony if it occurred during a riot.

The bill would establish protection for people to use lethal defensive force during a riot in cases where they were intentionally blocked or prevented from escape.

Camping on property owned by the state during or within 24 hours of a riot would be criminalized by the bill, classified as a Class A misdemeanor on the first offense and a Class D felony for all subsequent offenses. However, the bill would exempt homeless people from those charges.