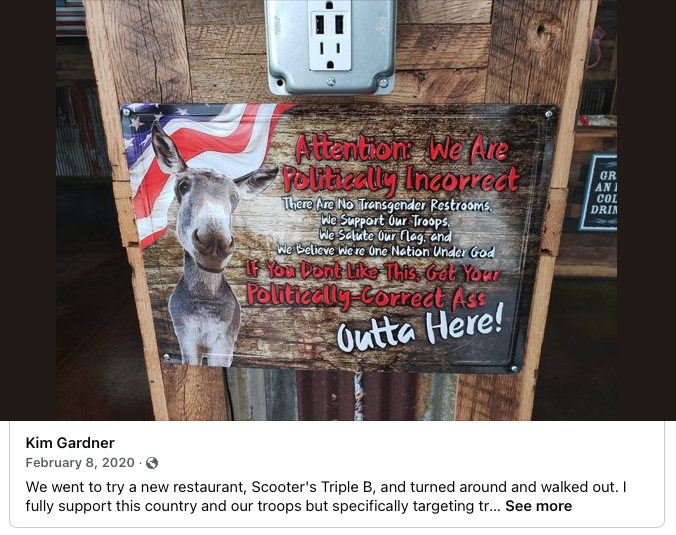 Scooter’s Triple B’s, a sports bar off of Hurstbourne Parkway that has been accused of transphobia in the past, will close on Feb. 12.

Scooter’s opened in late 2019. In February 2020, a patron discovered a sign in their restaurant saying, “Attention: We are politically incorrect” and “There are no transgender restrooms.”

Scooter’s responded with a Facebook post that no longer exists saying, “We do not discriminate against anyone. We would love to have everyone come in and enjoy our establishment. But we will not have a group try to force us to go against our beliefs as we don’t force ours against anyone. Yes our sign says we do not have transgender restrooms. That does not mean they can not use our restrooms. They just need to use the one that goes with the gender they were born with.”

At the time, the Fairness Campaign responded with its own post saying, “‘No Transgender Restrooms’ says a Louisville restaurant. We’ll be asking the Louisville Human Relations Commission—the agency that enforces Louisville’s #FairnessOrdiance—to look into this anti-#LGBTQ business.”

In its goodbye message posted last week — almost two years after the controversy — Scooter’s did not give a reason for its closure saying, “We are saddened to inform you that Scooter’s Triple B’s will be closing its doors soon. We wanted to thank all of you for being a part of this journey for the last 3 years. We have loved all the meals and conversations we’ve got to have with you all.”