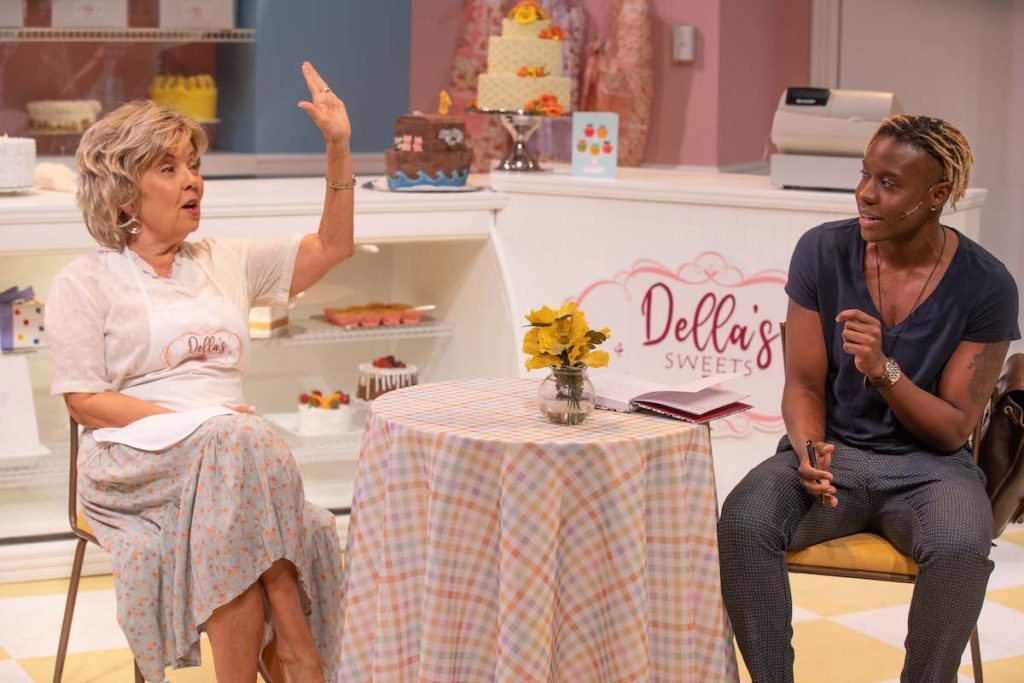 Georgette Kleier as Della and Adama Abramson as Macy, two characters on opposite sides of the "gay wedding cake" dilemma.Photo by Bill Brymer

From the opening of Bekah Brunstetter’s 2019 play “The Cake,” we know that we’re in the presence of a person who is serious about the art of cakery. Standing behind the counter of the cheerful small town shop that bears her name, a woman named Della offers up a brisk monologue that starts with a psychological profile of the aspiring home baker, proceeds to ingredients and techniques and includes cautionary advice (never skimp) and a serious admonition: “You must follow the directions.”

For Della, a person steeped in the cuisine and manners of the South, a cake is as much an expression of values as it is of the ingredients. And her dedication and skill have brought her to the cusp of fame: she’s been selected to appear as a contestant on a reality show called “The Great American Bake-Off.”

That blithe opening — brilliantly delivered by Georgette Kleier, who stars in director Michael J. Drury’s Pandora Productions’ local premiere of the play — could have served to introduce a light, frothy comedy. But instead it serves to heighten the moral and emotional crisis that follows.

But Brunstetter’s play does not litigate those issues, it explores them in a story rich in wit, sorrow — and surprisingly bawdy humor.  “The Cake” is one of those rare plays that feels as if the writer created the characters and then unleashed them to find their own ways through. The result is unsettling and provocative.  And no matter which side you’re on (though my guess is that one side of the debate will never see this play, alas), you’ll likely come away with a deeper understanding of the other.

The drama begins when a young woman named Jen (Katie Martin) returns home after years away to tell Della that she’s getting married and wants Della to bake her a wedding cake. Della, who adores Jen and was close to her late mother, is delighted at the prospect — and immediately leaps to imagining the perfect cake — until she learns that Jen is marrying Macy (Adama Abramson), and that the wedding will feature two brides.

A flurry of polite, panicky dissembling ensues as Della discovers that her cake-baking calendar around the time of the wedding has suddenly filled up.

And from that moment on, the play is propelled by an urgent, fast-paced script. Brunstetter is a formidable writer with ample and varied credits (including NBC’s “This Is Us” and Starz’s “American Gods”).  And she’s goes about her business with a fearless honestly that requires an equally fearless cast.

And this production gets exactly that. I have rarely seen an entire ensemble plunge so deeply and unreservedly into the complex and paradoxical humanness of their characters.

Macy is an abrasive absolutist whose sense of moral certainty gives her full license to pursue her agenda without regard to the consequences or the feelings of both those she loves and those she views as enemies. She is incapable of the polite hypocrisies that grease the social wheels. Abramson plays the part with a steely resolution so chilling that even those who agree with Macy’s principles may question their resolve.

That’s certainly the case with Jen, who understands full well that Della’s calendar is a polite evasion. Jen is the product of an etiquette based around subtle signals, and Martin delivers a masterful and nuanced performance — until her relationship with Macy explodes.

Della and her husband Tim (Joseph Hatfield) inhabit their own intimate tragedy that eventually grows into a secondary plotline so poignant and comic that it could almost stand alone as its own play — though here it serves as an excellent counterweight. As Della reflects on her inability to sanction Jen’s lesbian marriage, she starts to question whether her own marriage is truly “biblical.” That line of thought leads to chain of revelations that culminate in arguably the best bedroom scene ever performed on a Louisville stage.

Pandora has a well-established reputation as one of the city’s best theater companies — with a special gift for staging ambitious, large-scale productions. But this four-person show ranks with Michael J. Drury’s finest directorial work. It’s detailed, bold and honest (even down to the sweet final scene).