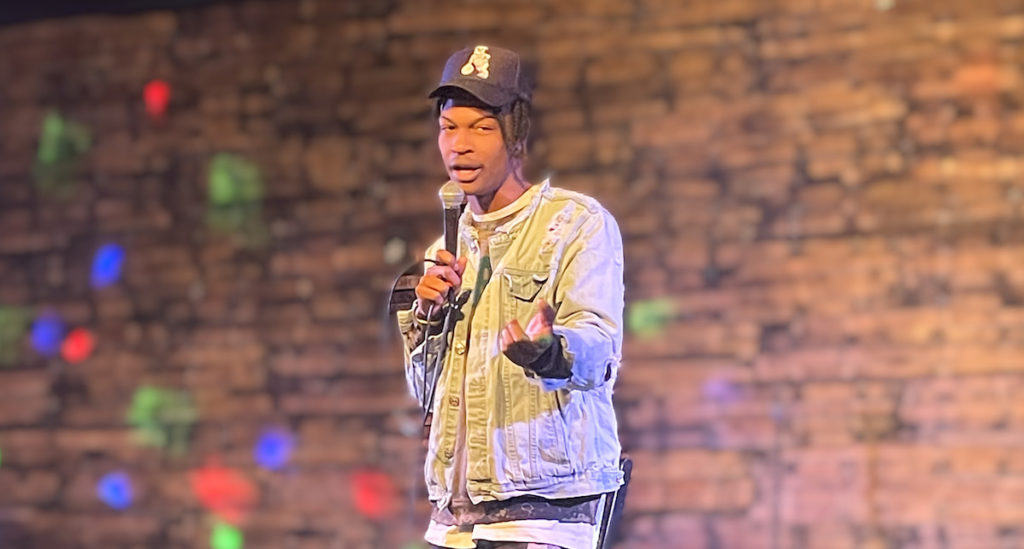 Geron Hurst weaved history through his jokes with masterful dexterity at the MLK Weekend Comedy Show at 21st in Germantown.Photos by Sarah Kinbar

One of the most enduring memories we have of Martin Luther King, Jr. is a snippet from his last minutes of living. He was in Memphis to support striking Black city sanitation workers, and was staying at the Lorraine Motel. There, on the balcony outside his room, he had a conversation with the blues saxophonist Ben Branch. A Memphis native, Branch was back in his hometown because King had requested that he participate and play at the rally. Just before being shot, King saw Branch in the motel and called out to him about a song request for that evening, “Precious Lord, Take My Hand”: “Play that song tonight – I want you to play it like you’ve never played it before in your life.”

Entertainment – whether music, literature, film, or comedy – has long been a vehicle for speaking truth to power, and the Saturday comedy show at 21st in Germantown was no exception.

The event promoter Imran the Great – also a comedian and co-founder of the arts group Young Kentucky Natives – observes the significance of bringing both music and comedy into a space, and chose the ethereal jam band Mr. Please as the opening act.

“As a person who is passionate about what I do, I always feel more secure when I surround myself with artists who are equally as passionate,” said Imran. “I can tell that Mr. Please is a band that exists to persist in vibing. I wanted this show to be a vibe. Plain and simple,” he said.

The evening was a charitable event, with money from shoe donations and ticket sales being funneled into Young Kentucky Natives. “Our goal is to get a safe, affordable work space for artists, activists, and entertainers in Louisville.”

Mr. Please bassist Jarrod McClellan commented on the night: “We were honored when Imran asked us to collaborate on this show. Getting the chance to play in our city, celebrate our diversity, and most importantly, give back to our community, it’s a big part of who Mr. Please is.”

When Mr. Please wrapped up an hour and a half of making heavenly sounds, a stellar yet male-dominated lineup of local comedians took the stage in this order: Lucious Williams, Waldorf, Geron Hurst, Jei Chandler, Imran the Great, Sporty-T and Fat Freddy. The host, Mikaiya, was the lone female with a mic, handling the packed room and the comedians with ease and impeccable style. She is a heavyweight and we can expect great things from her standup career.

Two comedians stood out for their clarity of thought and boldness in going to complicated places, tackling racism, the n-word and self-defeating choices in the Black community.

Geron Hurst, only 23 years old with four years as a standup under his belt, but possessing the knowledge and vision of a much more experienced comedian and thinker, poked at Obama, roasting him for advancing LGBTQ+ agendas more thoroughly than he did Black agendas during his presidency.

Weaving history through his jokes with masterful dexterity, he reminded the audience of Black achievements, mentioning the work of inventor Lucean Headen, who in 1917 developed a cloaking device for submarines. Hurst wondered how this made sense if Headen couldn’t even swim. Hurst’s well-timed crowd work and clever observations kept his heavy set flying high. As he put it, “If the LGBT community would’ve got reparations tomorrow, n-ggas would have been outside sucking dick.”

Typically, a comedian will develop their set over time, editing jokes in and out as they advance creatively. Hurst thinks differently.

“I like to use new material for every set to keep things fresh. I don’t like the idea of using a lot of old jokes, because I feel like someone who is funny in conversation doesn’t repeat things already said in conversations just to be funny,” he said. “I decided to make a lot of jokes about Martin Luther King, Jr. because of it being MLK weekend but also to shed light on … the Black perception of him. Black people have a love/hate relationship with Martin, because he is a celebrated African American who did fight for the civil rights of our people, but we didn’t always agree with his tactics or all that he said. We also feel that there are other Black leaders who are better role models for our youth.”

Jei Chandler tore through his set with emotion and fire – but every word was strategic. Chandler asserted that he is not a comedian; he’s a hater – but he’s much more than that. His comfortable application of ancient storytelling devices defines him as a deeply-educated communicator. His use of intentional contradiction, a literary mechanism found in texts that are more than 3,000 years old, helped illuminate his points and kept the audience hooked.

“You know what I hate? When people walk up to me and say, ‘Hey, Jei. I heard you’re a comedian. Tell me a joke.’ N-gga, fuck you. Show me a contract, motherfucker. I don’t got to prove myself. Fuck you. Besides, I don’t know any jokes. And the ones I do know are crass and disrespectful. People don’t like ‘em. Y’all wanna hear a couple of these motherfuckers?”

Of course we did!

Addressing Black response to the use of the n-word, he recalled ignoring a homeless man who yelled “Hey, Black boy” at him as he walked past.

A whole book could be written on that joke premise alone. But he barely paused before giving voice to the homeless man:

“He said, ‘Why don’t you go back to Africa? And take me with you! It’s colder than a bitch out here!’”

Chandler referenced King repeatedly, wondering aloud whether King got a holiday because he had intimate affiliations with white women. He rewrote the “I Have a Dream” speech in a manner so offensive, it was blasphemous.

Chandler recalled his own youthful astronaut aspirations – his mother worked three jobs in part so he could attend a space program in Florida. As he grew up and learned Black history, he jokes that he abandoned those space travel dreams. “I ain’t gonna be in no white man’s space program! I’m way off on Mars calling back to earth saying, ‘Yes, NASA. No, NASA. Fuck that!’”

Bottom line, some of the comedians on Saturday’s roster brought their A-game to the stage, emphasizing content that would likely have bothered King but also reflects today’s nuanced conversation around race. Look to all the performers who participated in this show to deliver sounds and stories that you need in your life.

CORRECTION: An earlier version of this article gave the wrong Instagram handle for Imran the Great.