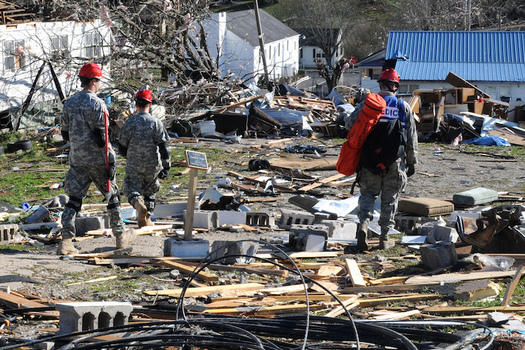 A $200 million tornado relief bill moved quickly through Kentucky’s General Assembly Wednesday — passing unanimously through both chambers — that will provide housing, education needs and more for those affected.

House Bill 5, which passed through both the House and the Senate in a matter of hours, was signed into law by Gov. Andy Beshear on Thursday.

Of the $200 million, $45 million will be allocated immediately.

HB 5 was signed into law today, bringing much-needed relief to the residents of west Kentucky who were affected by the recent storms. #KYGA22 pic.twitter.com/wLEwGLt2cn

The Kentucky Department of Education will receive $30 million for wrap-around services for recovering families including after-school services, mental health counseling and out-of-school tutoring. The money will also provide funds for additional transportation costs and construction and repairs to school facilities.

The Department of Military Affairs, Division of Emergency Management will receive $15 million to be used toward FEMA-eligible housing units.

Under the bill, the General Assembly has to approve any other ways the additional money is spent. Since it’s an even-numbered year, this legislative session may last up to 60 days and until April 15, so more movement on the spending is likely.

Rep. Jim Gooch Jr. (R-Providence), who has represented the 12th District in Western Kentucky since 1995, said that it’s important that housing and school funding be prioritized for these communities.

“It’s going to be difficult for these communities to build back when people have to move somewhere else to find shelter, to find another school system,” he said.