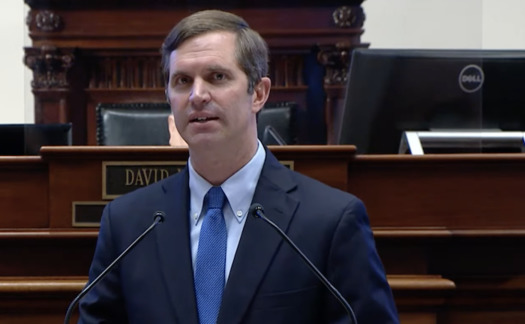 Gov. Andy Beshear talked budget and economic development at his State of the Commonwealth.Photo: Office of Gov. Beshear

Gov. Andy Beshear spoke before a joint session of the Kentucky House and Senate last night, in his third Commonwealth address.

After a year of historic flooding, tornadoes and other natural disasters, on top of the pandemic, the governor said his budget — which he will reveal next week — is focused on bolstering communities.

“It’ll invest in our essential workers, like our Kentucky state police, our nurses, our teachers,” Beshear explained. “To ensure we can not only recruit but retain these critical jobs. ”

Beshear also touted the state’s economic momentum, with a record $11.2 billion in private-sector investment, estimated to bring more than 18,000 jobs to the Commonwealth.

Beshear also noted infrastructure will be a major priority in 2022.

“To invest in infrastructure, with more water and sewer grants,” Beshear outlined. “It will continue to expand the mountain parkway to four lanes, and it will work to construct that I-69 bridge.”

The governor also called for an end to partisan rhetoric, as many Kentuckians struggle with the loss of loved ones and homes in natural disasters.

“With all that we’ve experienced this year, we should be over fighting, over the bickering, over the games,” Beshear urged. “After this year, I’m convinced that our role in government is not to move a state right or left but to move it forward.”