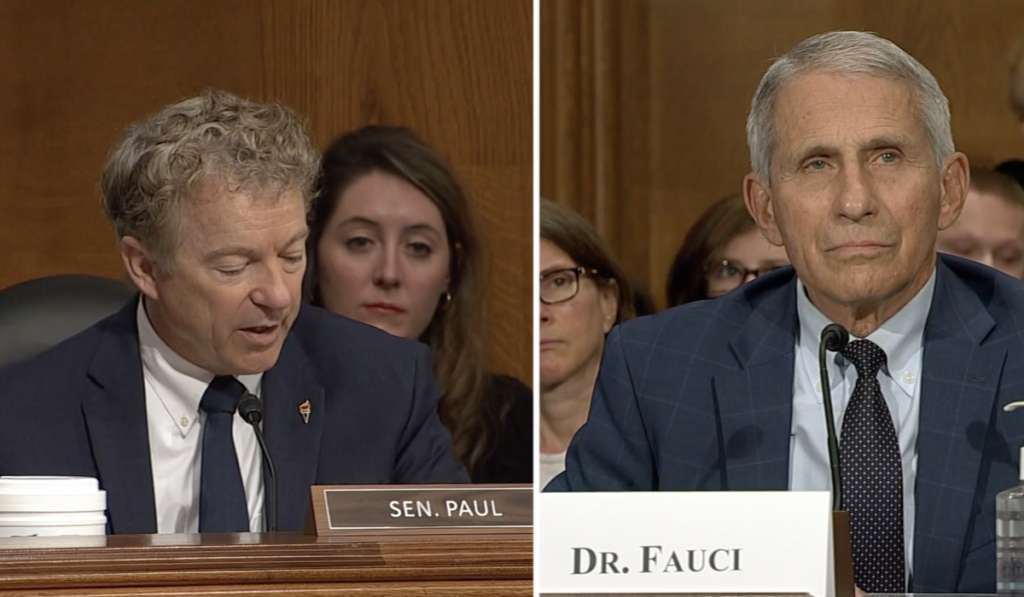 Sen. Rand Paul and Dr. Fauci during a heated exchange in 2021.

After once again being attacked by Sen. Rand Paul at a Senate committee hearing on Tuesday, Dr. Anthony Fauci said that the Kentucky politician’s repeated accusations have lead to death threats being made against him, as well as the harassment of his family via “obscene phone calls.”

Fauci, the director of the U.S. National Institute of Allergy and Infectious Diseases, also said that he believes that Paul has made him a target for political gain.

The exchange, which lasted about 10 minutes during the hearing, started with Paul saying: “Dr. Fauci, the idea that a government official, like yourself, would claim unilaterally to represent science — that any criticism of you would be a criticism of science itself — is quite dangerous.” He went on to accuse Fauci of attempting to “take down” scientists that disagreed with him.

Fauci countered by saying that Paul was misrepresenting facts and spreading misinformation, similar to previous instances.

“There you go again, you just do the same thing every hearing,” Fauci said.

“There are two reason why that is really bad,” Fauci continued. “The first is that it distracts from what we’re all trying to do here today, is get our arms around the epidemic and the pandemic that we’re dealing with, not something imaginary. Number two: What happens when he gets out and accuses me of things that are completely untrue is that all of a sudden kindles the crazies out there, and I have threats upon my life, and harassment of my family and my children with obscene phone calls, because people are lying about me. I guess you could say, ‘That’s the way it goes, I can take the hit.’ Well, it makes a difference, because, as some of you may know, just about three weeks or four weeks ago, on Dec. 21, a person was arrested who was on their way from Sacramento to Washington D.C. — at a speed stop in Iowa — and the police asked him where he was going, and he was going to Washington D.C. to kill Dr. Fauci.”

Fauci also held up a screenshot of Paul’s website, which had a banner that read “Fire Dr. Fauci” with an attached donation portal.

“So, you are [using] a catastrophic epidemic for your political gain,” Fauci said.

Then the two shouted over each other until moderator Sen. Patty Murray, a Democrat from Washington, cut them off in order to move to on so that other Senators could ask questions.

Stay tuned for when this inevitably happens again.