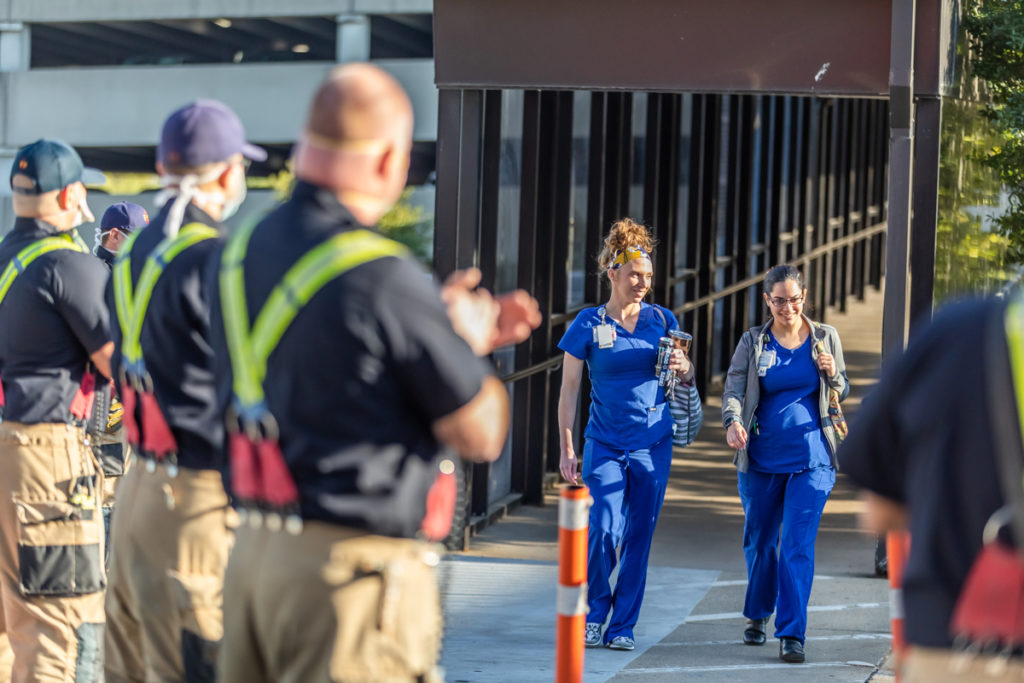 Health care workers arrived for their shifts and were met with applause from Louisville police officers and fire fighters.Photo by Kathryn Harrington

Kentucky lawmakers heard from the state’s nurses, firefighters, truck drivers, grocery store employees and other essential workers yesterday in the first of two public hearings on how to distribute essential-worker bonus pay.

Gov. Andy Beshear has said he wants to use $400 million in federal aid out of more than $2 billion the state is expected to receive in American Rescue Plan Act funds.

Rep. Joni Jenkins, D-Louisville, said workers’ input on how the coronavirus impacted their profession will be considered by a special workgroup as lawmakers debate how to divvy up the funding.

“The workgroup will be issuing recommendations to the governor about how to use this money, and may be part of his budget bill or may be a stand-alone bill when we go back into session in January,” Jenkins noted.

According to the Kentucky Center for Statistics, more than three quarters of the state’s residents, 1.4 million people, are employed in critical occupations, the third highest in the nation, behind Mississippi and Indiana.

Federal rules issued by the Treasury Department allow states to provide bonus pay up to an additional $13 per hour in addition to a person’s regular pay, without exceeding $25,000 dollars per eligible employee.

Rep. Buddy Wheatley, D-Covington, explained bonus pay is available specifically to frontline workers who could not work remotely and who faced health risks due to the nature of their profession.

“All of these groups will have an opportunity to say what they want,” Wheatley stated. “We’re not going to be able to get everybody to testify. But we have left open the availability of written testimony.”

He said written comments will be accepted through the end of December. Anyone who wants to testify or submit input in writing can contact Shellee Hayden in the Kentucky House Democratic Caucus office at [email protected]

Support for this reporting was provided by The Carnegie Corporation of New York.