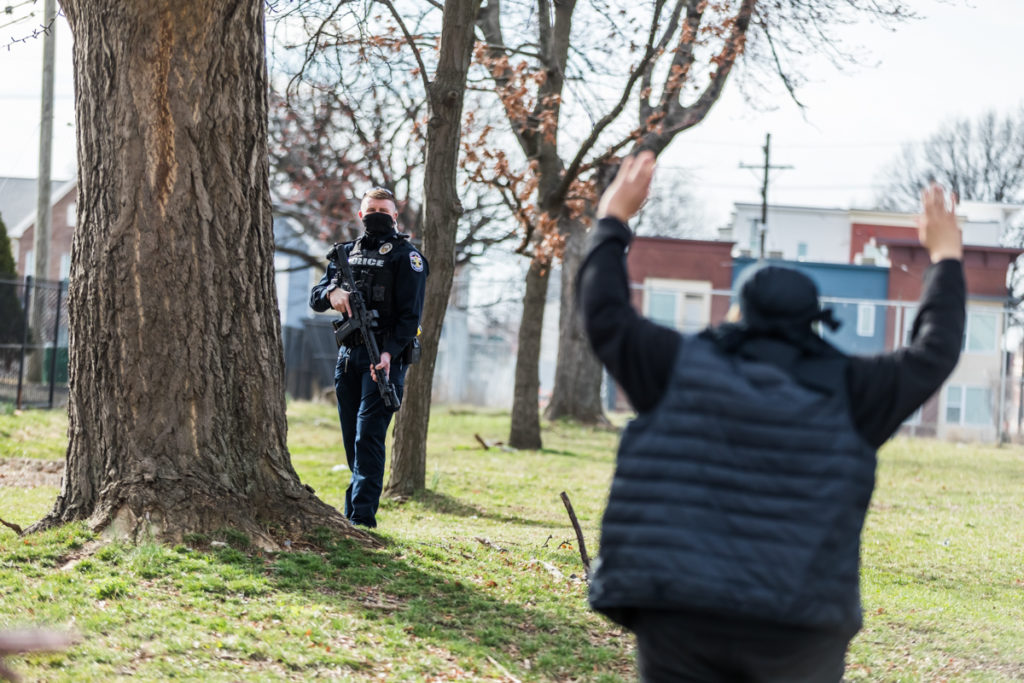 A protester stood with their hands up as a police officer held a gun while protesters marched through downtown.

THORN: You’re Not My Doctor

Kentuckians are closer than ever to getting medical marijuana. But, the Kentucky GOP can’t let us have something good without tainting it. Presumably to assuage his colleague’s concerns, state Rep. Jason Nemes told the Courier Journal that the bill he is working on would only allow medical marijuana to be prescribed to treat four conditions (chronic pain, epilepsy, multiple sclerosis and nausea). Since when did Kentucky Republicans become medical experts? (Rand Paul doesn’t count.) We think it’s doctors who should be deciding what to use medical marijuana for, not politicians.

THORN: Hey, Don’t Tell Us What To Do

Speaking of Kentucky Republicans just not getting it, two specific lawmakers think we’re getting too demanding, wanting to tell our civil servants with military grade gear how to do the job they do… for us. At a recent legislative meeting, Sen. Danny Carroll and Rep. John Blanton expressed skepticism about Louisville’s new police accountability board. Carroll said, “Police officers do not like being forced to do things.” So, the people who are meant to enforce the law don’t need to abide by rules or be held accountable? Cool, well here’s some more assault rifles, boys. Have fun and don’t do anything we wouldn’t do.

So, this is where Trump era politics have gotten us. Three Kentuckians who tried to impeach Gov. Andy Beshear last year are running for state legislative office, according to the Courier Journal. And the sad thing is, we’re no longer confident that these wingnuts will lose spectacularly. Jacob Clark, Tony Wheatley and Andrew Cooperrider are all challenging more establishment Republican candidates for state House and Senate seats. Wheatley, in particular, is a frightening candidate, as he organized the rally at which an effigy of Beshear was hanged.

Trump’s insults just aren’t what they used to be. The former president has taken to calling Sen. Mitch McConnell an “Old Crow” — in rambling press releases since he no longer has access to Twitter, of course. In fact, maybe his inability to jab out 50 missives a day is what’s eroding his ability to craft biting schoolyard taunts. McConnell, for his part, is showing that he has a sense of humor about the situation — or, at least, his more Online™ communications staff does. His campaign Twitter changed its avatar to a picture of Old Crow bourbon recently. It was a missed opportunity to invoke a photo of Old Crow Medicine Show, but we have to accede that bourbon is more on brand for Kentucky.