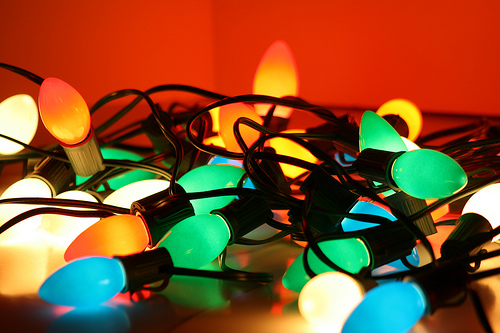 You may have taken a ride with Danger Run this Halloween, but are you ready to do a merrier holiday scavenger hunt with Rudolph the red-nosed reindeer –– without leaving your car?

Rudolph’s Run is a Christmas-themed scavenger hunt that takes the participant to suburban houses that have amazing displays of Christmas lights and decorations. There are two runs in our area, one in Louisville, and one in New Albany. The Louisville run ends at the Paristown Fête de Noël. (Parking at the nearby 712 Vine St. lot is not included in your ticket price.)

The premise of Rudolph’s Run is that Santa has lost pieces of his list, and Rudolph needs help from the participants to solve clues and puzzles from their smartphones as they drive around the city.  Carloads that solve all the puzzles correctly are entered into a weekly drawing for a $100 gift card.

The whole thing takes 90-120 minutes to complete, according to the company, but it does not have to be completed all in one night.

The company that puts on Rudolph’s Run also produces  two other holiday-themed scavenger hunts: Danger Run in October and Romance Run in February. The routes also operate in Chicago and Indianapolis.

You can play Rudolph’s Run any day from now through Dec. 26. Tickets are $29.99 per carload; you can buy them at this link. A portion of the ticket proceeds will go to a local charity.