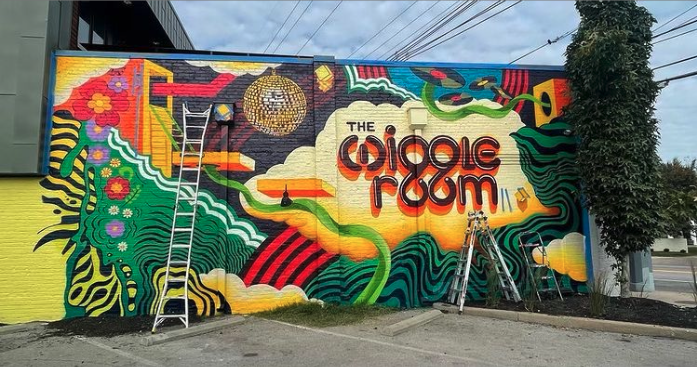 When JC Denison and Emily Ruff of theMerryWeather decided to open another bar, they wanted a bigger space and a spot in The Highlands.

They found it on the second floor of the former HopCat building on Bardstown Road. The Wiggle Room officially opened its doors this week.

Along the way, Denison and Ruff teamed up with Stan Chase, founder of the Louisville Vegan Jerky Co. With his expertise, The Wiggle Room’s six draft cocktails, wine list and 22 beers are all vegan. And the snacks are, too!

But wait a second — alcohol isn’t vegan? Most liquor is, but that’s not the case for wine, apparently. Denison and his partners had to do some research to find a range of natural, vegan wines.

“They’re very delicious,” said Denison. “Some of them are kind of high end and a little on the pricier point as far as a glass goes. But, you know, we did find some very affordable $6 and $7, $8 glasses of wine that you could get here that are still vegan.”

For the vegan cocktails, The Wiggle Room’s owners have procured vegan Baileys cream and aren’t using animal byproducts like honey.

Denison describes the cocktails as “fun and interesting,” and we have to agree. They include a Highlands Iced Tea, or a HIT — a  take on a Long Island Iced Tea with dark Jamaican rum,  Aperol, house lemonade, iced tea, mango and cinnamon — and a couple combinations of drinks like a Pina Rita (piña colada + margarita) and a CosmoTonic (a cosmopolitan + gin and tonic, made with a house cranberry citrus tonic.)

In keeping with The Wiggle Room’s name, there’s more space in the HopCat building than there is at theMerryWeather. Their newest place includes a large patio, room for pinball machines and a dance floor, which Denison and co. have complemented with a custom, locally-made disco ball and a regular schedule of DJs. On Thursdays, for example, DJ Spring Break will be in the house, taking suggestions for ‘80s to 2000s music videos to play on The Wiggle Room’s four large TV screens and its projector screen.

One of the reasons that The Wiggle Room’s owners settled on the former HopCat building was because it came with a bar and some of the furniture. For those who never saw HopCat’s second floor — which isn’t unsurprising since it was used as a private event space — it contains barstools covered in a “fancy, black leather” with red stripes.

“It seems the seating has sort of an upscale feel, and so we’re trying to balance that out with sort of a laid back feel regarding, you know, activities up here,” said Denison.

He and the other owners have been spiffing up the space, too, all the way down to the mural outside. What was once a HopCat mural is now dedicated to The Wiggle Room, painted by prolific Louisville muralist Wilfried Sieg III.

Since The Wiggle Room signed a lease on the building, a local investor, Andrew Owen, has bought it. He has plans for the first floor, hoping to turn it into a multi-purpose space.

“I’m really excited because I think that’s going to be more daytime focused stuff. And then obviously will be more of a nighttime thing other than the weekends,” said Denison. “So it’ll be kind of a nice, symbiotic relationship.”

The Wiggle Room is accessed via a door on the left side of 1066 Bardstown Road. You can take the stairs or an elevator to get there.