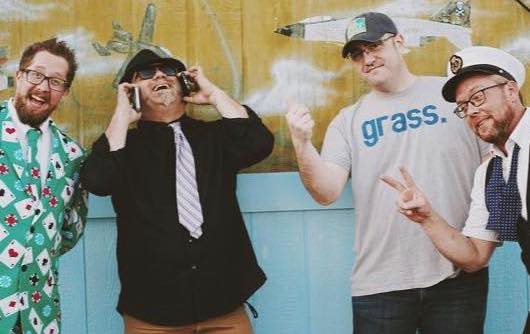 The Breaklights’ Jared Kelley has a good idea what most people are all about. “Finding love and having a conflicted relationship with where you come from,” the band’s singer and guitarist says. With that in mind, Kelley penned “Carrollton, KY,” a song he wrote as a way to crystallize the emotions and changes both of these life situations often bring with them.

“It’s basically a love song in which the protagonists feel like they need to pack their bags and leave town in order to escape the growing mountain of problems they’re facing, like financial problems or disdain for their job or just coping with every day life,” he said. “So, I guess the philosophy behind it is just to touch on that common human experience of feeling like we’re trapped in a loop and living a mundane existence.”

“Carrollton, KY” is what happens when ‘90s alternative production values meets the loose Southern twang of Son Volt or early Drive-By Truckers, infused with The Breaklights’ own particular punk aesthetic and a smooth twist of bluegrass guitar runs. It’s a fun, lazy shuffle of a song that enjoys itself, optimistically daring any listener not to get up and two-step on the spot or, at the very least, vigorously nod their head. Kelley sings with perfectly slurred conviction that he thinks it’s time to leave this town and, for some reason, we’re ready to go with, him.

“I wrote this song years ago [originally under the Ice Cream Socialist Party moniker] but it never really found a home until Symone [Soltero, bass], Brandon [Kindoll, lead guitar] and KC [Ken Carter, drums] started playing it with me,” Kelley said. “There’s something about this group that, when we play together, we sound truly unique, to me, at least. It was interesting coming together and doing this song because Brandon and I have known each other almost our entire lives but never played music together until 2020 when Symone and I were jamming on my back porch, social-distance style, during the pandemic.  As it turns out, a bluegrass lead guitar was exactly what our punk rock band was looking for.”

There’s a duality to Kelley’s message in the song, however, one that he himself was living while writing the song. Sometimes, he says, the things you think you want when you’re younger aren’t the same as what you’re after when you get older.

“It’s funny because the song title really makes you think that I wanted to run away from my hometown of Carrollton, Kentucky, but I was actually living in Walton when I wrote it and was really running back to home. I think most people that grow up in small towns have mixed feelings about it, especially during your teens and early 20s. I remember being in high school and everyone wanting to ‘get out,’ but I was always more complacent and happy to stay. So, of course, I ended up leaving and most of them stayed. Naturally, I’ve drifted in and out a few times, but have always loved my old hometown and the people that reside there. So, while it sounds like this song is about escaping it, it’s more of a love letter to it than a ransom note.”