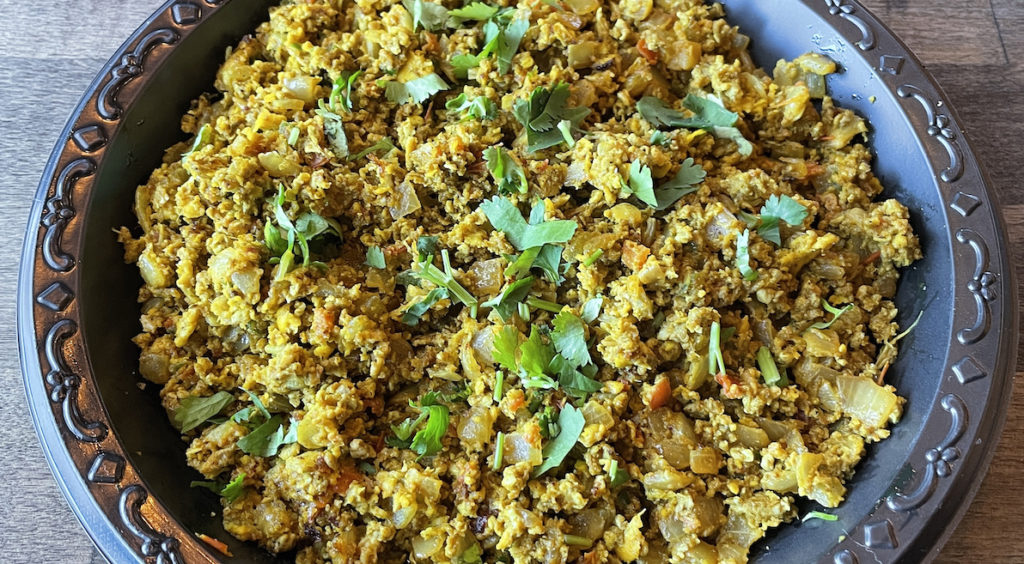 Eggs are popular. Most people love them for breakfast, lunch and even breakfast-for-dinner. So it’s no surprise that egg-centric eateries draw crowds in Louisville. Wild Eggs landed some 15 years ago, and Con Huevos brought its Mexican flavors to our world of eggs in 2015.

Now EggHolic has come to town to tantalize us with delicious egg dishes in the style of the Gujarat region of Northwestern India.

A Chicago-based, quick-service restaurant just on the cusp of becoming a chain, EggHolic is branching out from its original two Chicagoland locations to open in Columbus, Ohio, and Louisville. More shops are coming soon in Nashville and the Dallas and Washington, D.C., suburbs.

Eggs may sound like a strange ingredient in Indian fare, but EggHolic’s founders Lay Patel and his cousin Bhagyesh loved them when they were growing up in Gujarat’s largest city, Ahmedabad.“Egg Night” meant a rush for egg-based street food, Patel told the Chicago Reader in a 2019 interview. “Every time we’d go there, we’d try something different,” Patel said.

Having moved to Chicago’s western suburbs with his parents in 2005, Patel quickly grew into a fast-food entrepreneur, opening several Subway shops in the city. But he and his cousin missed Gujarati egg dishes and the street-food carts called laaris that served them.

They opened their first EggHolic shop in 2018 in suburban Schaumburg, Illinois, creating a sort of hybrid between a laari cart and a quick-service Subway stand. They opened their second shop on Chicago’s Halsted Street a year later, and the Columbus operation shortly after that. Now it’s Louisville’s turn, and we’re lucky to be one of the first franchises.

As a matter of strange reality in this shrinking modern world, it may actually be easier to get an Indian egg dish in Louisville right now than it is in Ahmedabad.

According to reports in Al Jazeera and Indian Express, in mid-November authorities ordered the removal of non-vegetarian food stalls from main roads in five Gujarati cities. In the local context, “vegetarian” means what we would call “vegan.” So eggs were outlawed, too, as authorities shut down the laaris to avoid “hurting the religious sentiments of vegetarian Hindus” in the conservative state.

But we’ve got EggHolic, and EggHolic’s got eggs. Do they ever have eggs! The menu offers more than 60 dishes, and as far as I can tell, just about all of them save for a couple of dishes for children and a few cheese sandwiches and chaats are egg-based.

Pricing is reasonable, too: Just about every dish ranges in price from $6.99 to $10.99, with “eggetizer” starters priced from $1.99 to $4.99. Most of the dishes are vegetarian, though a half-dozen entrees feature halal chicken and range up to $12.99. With a menu full of eggs and plenty of paneer Indian cheese, I’m afraid our vegan friends are out of luck this time.

In quick-service fashion, you order from a counter at the back of the large, modern shopping center space, take a number and wait for your food. It won’t take long.

We started with a shared appetizer, cheese katori ($4.99). Four egg halves topped with grated shreds of mild white cheese were very much like deviled eggs with an Indian accent. The yolks had been chopped into tiny cubes rather than mashed, then mixed with a spicy greenish-brown sauce. They weren’t fiery but had a warm kick and a haunting taste, hard to identify, that might signal unfamiliar but delicious Gujarati spices.

A main dish, egg bhurji ($7.99), was enjoyable, and it was large: Perhaps two and a half cups of scrambled eggs chopped into tiny bits and mixed with chopped onion, cilantro and hot peppers. Ordered mild (the only options are mild or spicy), it was still warm but not at all intolerable, with complex spice flavors.

We went with the spicy option for toofani curry ($10.99), and it was hot enough to light me up. At least three hard-boiled eggs cut into quarters came in a shallow bowl, covered with a thick, textured reddish-brown soup that the menu describes as “a spicy gravy,” garnished with chopped cilantro. It too was hard to describe, and so fiery that it was hard to discern individual flavors, but it definitely got the endorphins working.

Paper-thin rounds of gently chewy roti/chapati flatbread, (free with meals, $1.19 à a la carte) were dotted with char marks, and full of sweet whole-wheat flavor. They were great for dipping into the soupy dishes.

Masala chaas ($3.99), salted buttermilk, was similar to salty yogurt lassi but thinner. Mixed with cumin and coriander, it tasted good, but a spicy kick made it a less effective heat antidote than lassi.