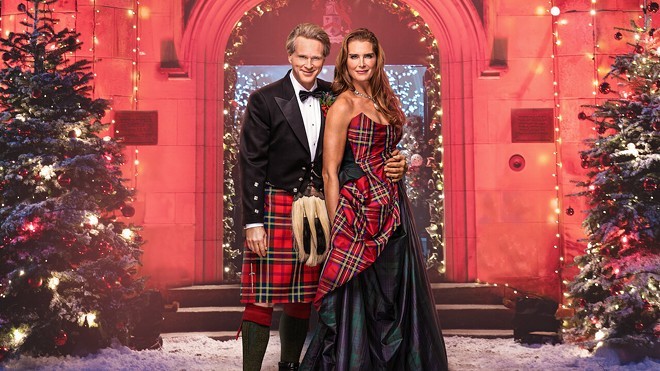 Cary Elwes (left) and Brooke Shields in Netflix's "A Castle for Christmas."Photo courtesy of Netflix

We love a good made-for-TV holiday movie — the cheesier the better.

Are you a still-single 30-something who gets magically stuck in a literal snow globe in order to find true romance this Christmas? Great. Have you fallen in love with a hot ghost who can only appear in the flesh for the 12 days leading up to Dec. 25? Even better. Are you a hard-working business woman from the big city who has to travel to a tiny town to take over some independent family inn/ornament factory/bakery/etc. only to fall in love with the hunk at the receiving end of your capitalist schemes before you uncover the true meaning for the season? Tell us more. Bonus points for fitting a castle or royalty, an actual secret Santa or a wacky case of mistaken identity into the wintry mix.

While Hallmark and Lifetime paved the way for deliciously cringe-worthy Christmas films, streaming platforms like Netflix have gotten in on the action, making original holiday films of their own.

Here are the new Netflix Christmas movies for 2021, ranked according to their ratings on IMDB.com.

“Father Christmas Is Back”

Rating: 4.4/10
Kelsey Grammer, Elizabeth Hurley and John Cleese star in this holiday romp about a British family whose literal last name is “Christmas.” Four very different sisters get together for what they hope to be a picture-perfect holiday at one of their Yorkshire mansions. But Grammer, their long-estranged father — aka Father Christmas — crashes the festivities with his much-younger, ditzy girlfriend. Family melodrama, holiday hijinks and one-liners abound.

“David and the Elves”

Rating: 5.2/10
This accidentally-comically-overdubbed Polish film is a modern Elf-like tale wherein an adult elf leaves the North Pole for the real world as he searches for meaning and connection with humans during the holidays. He befriends a child who helps him rekindle the magic of Christmas and inspires other jaded people along the way.

“The Princess Switch 3: Romancing the Star”

Rating: 5.5/10
Since Netflix seems to have exhausted all the sequels it can make out of the A Christmas Prince franchise (the third, A Royal Baby, aired in 2019), Vanessa Hudgens is putting in the work playing three separate but physically identical characters in the third installment of The Princess Switch films. This year’s movie is a follow-up to last year’s sequel about a Chicago baker named Stacy, now the princess of Belgravia; her doppelganger Margaret Delacourt, the queen of Montenaro (aka Hudgens in Jackie O cosplay); and the power-hungry-yet-broke-aristocrat Lady Fiona Pembroke (Hudgens in a blonde wig, dressed like a Kardashian). The three Hudgenses are back at it again, switching places to recover a priceless relic on loan for Christmas to Montenaro from the Vatican.

Rating: 5.5/10
In case you missed the original, Netflix describes this holiday romcom as such: “A year after their romance took root, Callie and Joseph are leaving the ranch for family business in San Francisco — with wedding bells on the horizon.” Awwww.

“A Castle for Christmas”

Rating: 5.5/10
This film, set in Scotland, stars Brooke Shields as a romance novelist in search of inspiration and redemption after fans turn on her for killing off one of her main characters. While on her sojourn, Shields — rich but single – pays a visit to the castle where her grandfather used to work as a groundskeeper. She falls in love with the decrepit, expensive structure and randomly decides to buy it, but current owner and grumpy duke Cary Elwes won’t give it up without a fight. For some reason he forces her to move in with him to try to scare her off. It doesn’t work. A tartan-wrapped romance ensues.

Rating: 5.7/10
Sequels and foreign films seem to the be the way to go this year. The second film for the Claus family is a whimsical Dutch jaunt (with subtitles) that follows Jules, grandson of Grandpa Noël (Santa), as he tries to help a little girl who wants her divorced parents to get back together for Christmas.

“Single All the Way”

Rating: 6.2/10
This is another romantic comedy geared at those who find themselves single during Christmas, disappointing families everywhere. Peter (Michael Urie) asks his BFF Nick (Philemon Chambers) to come home for the holidays with him to get his family off his back. But Mom (Kathy Najimy) decides to set him up on a blind date. The prospect of dating other people prompts Nick and Peter to reevaluate their relationship and realize they might be more than friends. Aunt Jennifer Coolidge pops in for lots of gay jokes.

Rating: 6.3/10
A terminally single columnist who reports on her own dating life, Natalie (Nina Dobrev) falls in love with a stranger on an app. After spending countless hours talking on the phone, she decides to pay him a surprise visit for Christmas. When she arrives at his house, she realizes she’s been catfished — hard. Instead of finding an outdoorsy hottie named Tag, she meets Josh (Jimmy O. Yang, Silicon Valley), an adult man with failure-to-launch syndrome who lives in his parents’ basement and makes candle. In Cyrano de Bergerac-style, Josh tries to help Natalie win the true love of the man he was pretending to be before things heat up between them.

Rating: 6.8/10
Set in Finland, this kid and his mouse best friend have to journey to a magical land of elves to bring the Christmas spirit and a spark of hope back to his people — and the world.